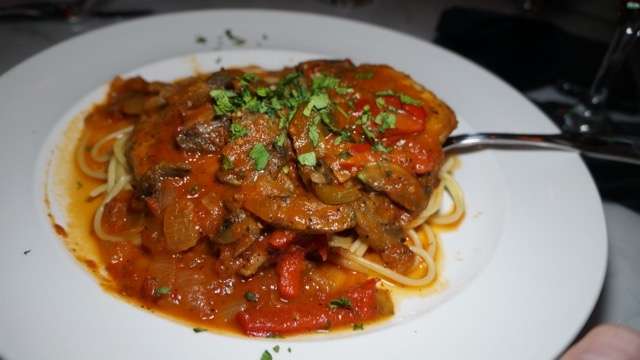 It would appear to be an immediate hit, if the crowd that was packed into it on a recent Friday is any indication.

My companion and I snagged two seats at the bar and looked over the extensive (and difficult to read) menu.

From the list of antipasti per due, we ordered the Calamari Luciana to share (since there were due of us). It was a bowl of squid rings and squidlets sautéed in wine along with plum tomatoes. The squid had varying degrees of doneness, but it was mostly enjoyable.

My guest chose the Vitello alla Cacciatore as an entree. It featured tender scallopini in a sauce of tomatoes, bell peppers, bits of onions and sliced mushrooms and served over basic spaghetti. The sauce was well seasoned and pulpy.

I ordered the Pappardelle al Ragu. The menu stated that it was a Neapolitan style ragu, which would indicate larger hunks of meat with sausage, but it didn’t appear any different than Bolognese, which which uses ground meat. Still, North or South, it was a good ragu, and I loved my pappardelle.

Since our server was also the bartender he was always right there if we needed anything.

This space has been one of the unfortunate ones over the years, with Harmoni Market, Wildside BBQ (which also served sushi, for some reason) and most recently Hangar bar and grill. But I think Armando’s might have what it takes to make a go of it here, and keep the “To Let” sign out of the window for a while.