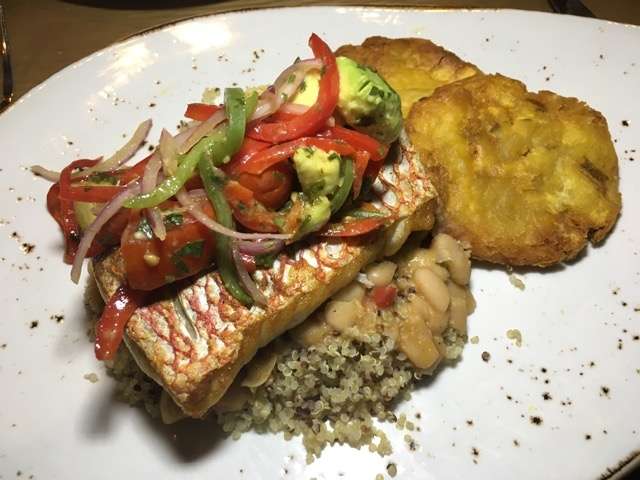 The website for Amatista Cookhouse at Sapphire Falls, the new Loews resort at Universal Orlando, says that it “transports guests to a paradise in the heart of the tropics.” But with its austere and cold decor and vast, open dining room, I thought more about the icy Fortress of Solitude from “ Superman” than anything equatorial.

The menu is ostensibly Caribbean but presents the dishes in a creative and stylistic way.

The Sancocho soup, with beef and pork plus casava and potatoes, was a good, if mild, starter.

But the Bacalaitos appetizer, the Puerto Rican salt cod fritters, were as thin as potato chips and much too greasy.

The entrees were quite good, especially my Pan-fried Caribbean Snapper, as pretty a dish as you’re likely to find within a five-mile radius. The red-scaled fillet sat atop a bed of braised quinoa and cannelini beans and was topped with chunks of tomatoes and avocados, peppers and onions.

My guest’s Seafood al Sofrito was just as satisfying. A sort of Caribbean bouillabaisse, it featured squidlets, shrimp and mussels along with onions and thick slices of green olives in sofrito, the sauce that serves as a base for many Latin American dishes.

The Chocolate Tres Leches dessert was an unusual, but tasty, presentation. Instead of the usual cakelike texture, Amatista’s was presented as rectangular logs.

Service was just OK. A couple of times we had to get up from the table to seek assistance. That’s as much a problem with the vastness of the place as it is with inattentiveness. One of those times was to request a spoon for the soup course, something a server should have thought to set out as soon as the order was placed. Also, it’s always a bit annoying to be assumed a tourist.

So should locals go to Amatista Cookhouse? The quality of the entrees was recommendable. But the overall atmosphere and dining experience isn’t all that welcoming, even with a table overlooking the Universal waterway and the incoming water shuttles. I probably wouldn’t suggest it as a place to meet, but if someone else invited me, I’d certainly go back.