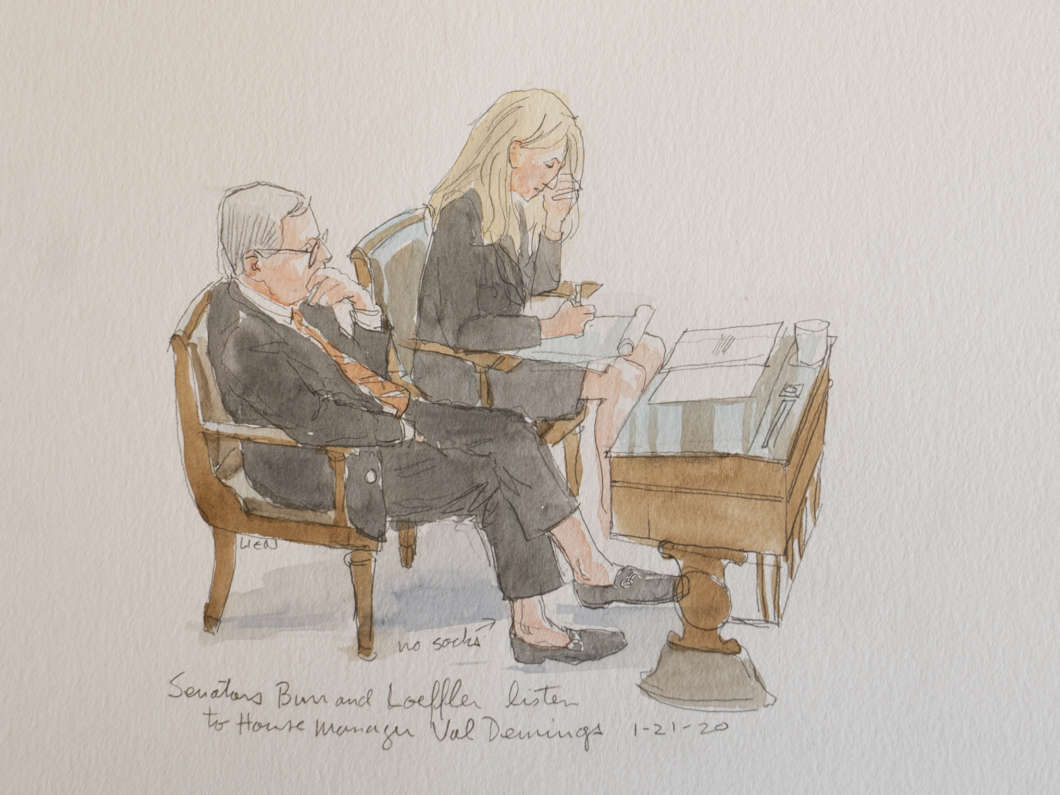 North Carolina Sen. Richard Burr with Georgia Republican Kelly Loeffler. "He caught my attention because he wasn't wearing socks. And he has very expensive loafers, or they seem that way. And so I did a sketch of him. And the next day, he had it as his profile picture on Twitter."
Image credit: Kisha Ravi

The public’s view of President Trump’s impeachment trial is limited. In an era of ubiquitous cameras, no photographs are allowed in the Senate chamber. The only video comes from a set of cameras operated by government employees that’s used by the television networks. There aren’t many camera angles.

To give the public a closer view, news outlets are employing a low-tech solution.

Art Lien has been giving readers of The New York Times a different view of each day’s events. From the gallery above the Senate floor, the courtroom sketch artist takes his pencil to 9-by-12 inch sheets of paper and looks for the tiny details that the cameras can miss.

Details such as fidget spinners.

On Thursday, Lien drew Sen. Richard Burr, R-N.C., with one of the contraptions on his desk. Burr reportedly gave them out to his Republican colleagues.

“This was sort of iconic yesterday. We noticed that several of the senators had fidget spinners on their desks,” Lien tells NPR’s Ari Shapiro on All Things Considered.

“I’m looking for color,” Lien says. “You know, something unusual, something that says something or tells some kind of story.”

On Tuesday, Lien says he found Sen. James Risch of Idaho “catching a few winks” while sitting in between Republican colleagues Mike Crapo, also of Idaho, and Roy Blunt of Missouri.

“Sen. Risch on the very first day fell asleep,” Lien says. “It was that late night, but this was only 5:30. … He was the first to go. Actually, I haven’t seen any other senators falling asleep.”

“His spokesperson said he was just simply listening with his eyes closed, but his head was definitely going down and down and down,” according to Lien.

Lien has been a courtroom sketch artist since 1976, mainly covering the Supreme Court. It wasn’t until 1986 that the Senate voted to allow complete television coverage of its proceedings. Lien says introducing the cameras made it easier to cover Congress.

“I was so glad when they brought in cameras. … Things move very slowly at times and then they move very fast in Congress. And it’s just a very, very tough assignment. And actually, when I went there last week for the swearing in of the senators, my heart kind of sank. You know it was like, ‘Oh my god, this is such a hard job.’ ”

It’s hard to keep it interesting, Lien says, especially when the trial lasts hours and hours each day. But the cameras in the chamber have helped him narrow his attention.

“I think there probably is something colorful around every corner,” he says. “It’s just, you have to look harder. One wonderful thing about now is that I don’t have to cover the wide shot of the chamber because that’s on television. I don’t have to cover the speaker, but I get to sort of roam around and look for other elements that I think are more interesting to me.”

NPR’s Connor Donevan and Justine Kenin produced and edited the audio version of this story.