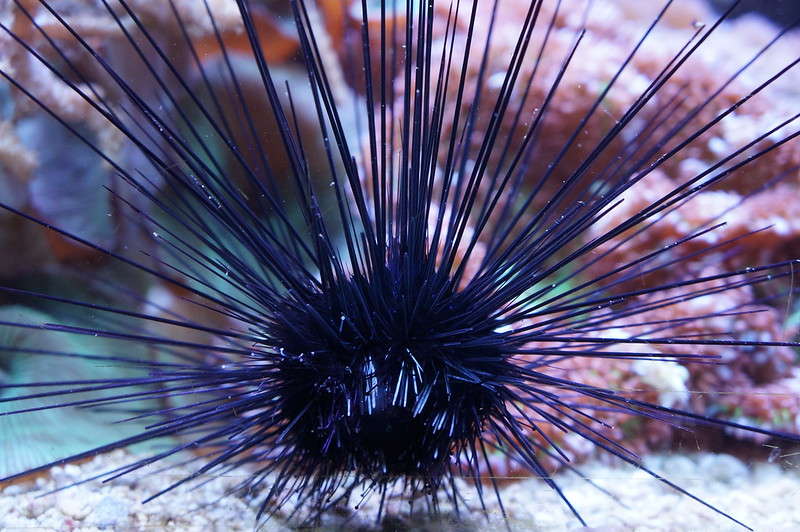 This week, the National Oceanic and Atmospheric Administration unveiled a $97 million rescue effort expected to take five to seven years. Part of the plan will include an unprecedented lab-breeding program to help revive long-spined sea urchins, a shimmering black-spined urchin, and one of the largest on the planet.

The move was made possible after University of Florida researchers at The Florida Aquarium succeeded in producing lab-bred urchins for the first time in large numbers this summer.

“There’s been a lot of work probably over the past 15 years where people have tried to get these to grow,” said Aaron Pilnick, a researcher and PhD student at UF’s Institute of Food and Agricultural Sciences. “It has to be perfect, from A to Z.”

NOAA’s rescue plan aims to help reefs fighting increasing ocean temperatures and acidity driven by climate change, a new stoney coral disease that wiped out many of the reef-building species, and hurricanes. The triple-whammy fueled about a 40 percent decline in reefs over the last 50 years, removing a major coastal defense to hurricanes and storm surge. Scientists also believe a massive die-off of the sea urchins fed the decline because it allowed thick, slimy algae to flourish.

“When the sea urchins died, there were few animals left on the coral reefs that were able to consume all this algae,” Pilnick said.

Florida’s reefs were once crawling with the spindly black urchins, scouring reefs and devouring the thick, weedy algae. That prevented the algae from growing too thick and blocking the light coral need to co-exist with the tiny single-celled algae that live in their tissue.

But in the 1980s, a mysterious disease spread across the Caribbean, wiping out 97 percent of the sea urchins, Pilnick said. Scientists still aren’t quite sure what triggered the disease, but the results were dramatic.

“If you go out to a coral reef in the Florida Keys, and you’ll see that there’s a sort of long, filamentous, fleshy, kind of ugly looking brown, sometimes green algae that’s covering and smothering the reefs,” he said. “This is the food for the long-spined sea urchin and this is the exact type of algae that’s now essentially smothering the coral reefs.”

It’s not clear why urchins failed to recover after the disease disappeared. Some scientists have suggested that overfishing of snapper and grouper, that eat one of the urchin’s chief competitors on the reef – damselfish – set up the imbalance. With too many damselfish moving urchins off the reefs, they struggled to bounce back.

Scientists have succeeded at breeding urchins in the lab in the past, but never before in such numbers. That’s partly because the rugged urchins undergo a complicated reproductive cycle.

Sea urchins reproduce like corals, releasing tens of millions of eggs and sperm into the water column. The larvae then float and incubate for 30 to 40 days, developing in a transparent capsule. As they drift, they eventually get drawn to reefs by food, where they transform into baby sea urchins.

“Essentially they undergo a metamorphosis, much like a caterpillar would turn into a butterfly, on the reef,” Pilnick said.

The trick in the lab was to figure out how to keep the larvae alive. In the open ocean, the larvae can feed on any number of microscopic phytoplankton.

“So in the laboratory, we essentially had to figure out what species of micro algae to feed to the urchin larvae in order to promote their larval development over the 30 to 40-day process,” Pilnick said.

They also struggled with water quality.

“They’re very, very sensitive and susceptible to changes and water quality. So even things like you know, 10 parts per billion of some type of dissolved metal can alter and negatively affect the larval development,” he said.

This past June, the Tampa-based Florida Aquarium lab, run by UF fisheries researcher Joshua Patterson, succeeded at breeding 100 – enough that once replicated could begin the arduous work of restocking the reefs. The next phase of the work will focus on how to deliver the baby urchins to the reefs – determining the optimal age and timing – so that they can produce the millions needed, Pilnick said.

“Absolutely, it’s possible to do that. When we’re in the lab, when we’re growing these from gametes, we can collect a couple million eggs at a time,” he said. “As we get better at this and as we continue to do the research and development, we’ll be able to improve upon that 100.”