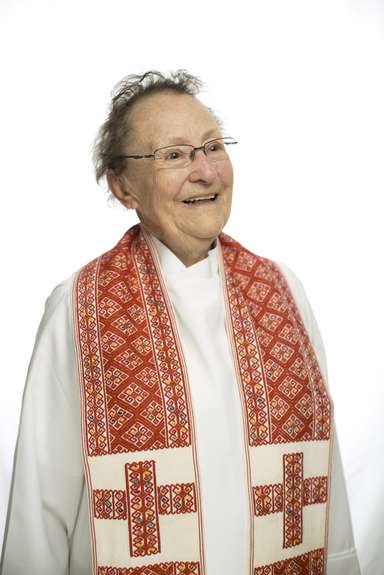 Rebel is not a word that leaps to mind when you first meet Belle Isle resident Rita Lucey. Nor does the word radical or revolutionary or agitator. Not even troublemaker. In fact, the words that do come to mind to describe the 80-year-old with wispy gray hair and vibrant eyes, are ones you might use to describe your favorite aunt or a kindly neighbor. Bubbly. Charming. Warm.

But Lucey is also a bit of a maverick – she was arrested in 1998 for protesting outside the controversial School of the Americas and served six months in federal prison as a result. She’s an active member of Amnesty International. On Jan. 17, despite strict Catholic Church rules that forbid women from joining the clergy, she became ordained a priest.

She joins a group of about 200 women around the world who are defying church teaching that only men should serve as priests. The women say the church’s stance on the subject is not only outdated, but also unjust and hurts the church in the long run because it refuses to treat women as equals and it closes the door on many devout women willing and able to serve. The first women priests were officially ordained by a Catholic male bishop in Europe in 2002, and the movement to bring more women on board has been growing ever since. The church has excommunicated the women, as well as the men who helped ordain them, and Lucey faces the same potential consequence. But she’s not afraid.

“This is ridiculous and an injustice, and injustices have to be addressed,” she says when asked whether she has any misgivings about her decision. “I have a right to be a priest as much as any man, because God created us equal. Men and women are equal in the sight of God.”