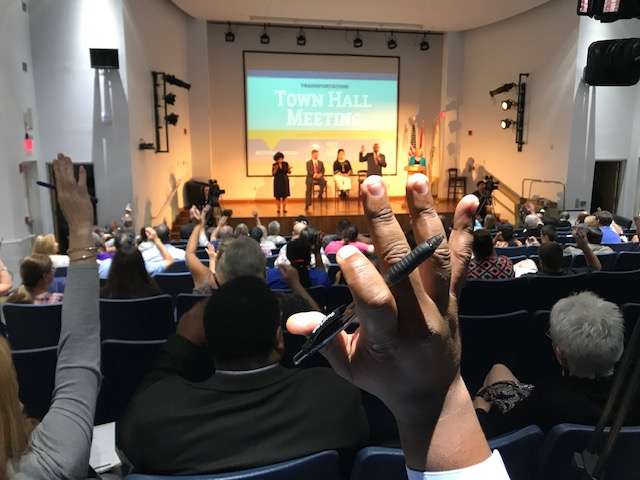 Demings wants to use the revenue to improve public transportation including funding for the Lynx bus service, SunRail, and roads.

The one-hour comment period was dominated by resident concerns that the county already had money for public transportation.

Some residents talked about the $145 million earmarked for the Kirkman Road expansion project near Universal Orlando Resort.

But others spoke in favor of the sales tax, saying the county needs to find new revenue sources to pay for infrastructure.

Demings said whether people were for or against a sales tax hike, they could agree on two points:

“They all agreed for the most part that we have a traffic congestion problem. They all agree that we should do something to solve that problem.”

Attendee Sarah Cunnard says she wants to see more public transportation, but it needs to be smartly designed with commuters in mind.

“The (SunRail) stations do really work well for my commute from where I live to where I work, and the cost is very affordable. The problem I run into is the cost from getting to the SunRail station to work is more expensive than my current commute in the car.”

Cunnard says she wants to see more options like vanpools where people could share rides for free between sites in the community and stations.

“Many people cannot afford to pay the toll taxes. Those are transportation taxes on these roads.”

Baptiste says she’d like to see the private sector provide mass transportation options in Orlando at a lower cost to commuters.

Demings says there will be other town halls throughout the county before the Board of County Commissioners decides whether to add the initiative to the ballot in 2020.

For more information on future town halls or to take the transportation survey, click on the link.