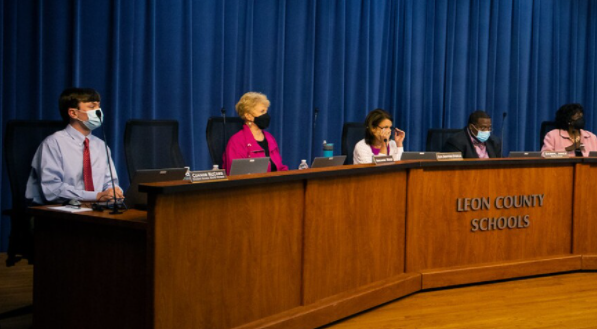 Members of the Leon County School Board preside over a meeting from a long dais. (Craig Moore/WFSU Public Media)

Local school boards have been under fire, most recently, over backlash to efforts to reduce the spread of COVID-19. Even before the coronavirus pandemic, many boards were facing criticism on policies regarding LGBTQ students, transgender bathrooms, and the classic textbook battles. Now, an effort to return those school board elections to partisan races is back—with a powerful sponsor.

Republican State Senator and GOP Committee Chairman Joe Gruters is backing the Senate version of the proposal. It’s a constitutional amendment proposal that would ask voters to undo a 1998 amendment that made local school board races non-partisan. Gruters says the measure is meant to bringing more transparency to school boards—so voters have a better idea of where the candidates stand on certain issues.

“Sometimes even when you have a candidate that’s of a certain political persuasion you don’t always get the outcome that you desired…but it at least gives you the thought that if they registered with a certain party, those core beliefs and values that you commonly share should be there when they’re making those votes,” he told the chamber’s ethics committee during the proposals first hearing.

Gruters says angry parents showing up at school board meetings indicates the issue is important to voters.

Democrats are expressing concerns about shutting out no party affiliated voters, who would be unable to cast ballots in partisan primaries. They’re also worried about the timing of the plan, with Sen. Tina Polsky noting it comes at a time when local boards are facing intense public backlash. Polsky views the proposal as an attempt to out Republicans and Democrats in red and blue counties.

“There seems to be a movement afoot to remove school board members, groups coming together to ‘take them out.’ And there’s a strong hostility toward them and that really bothers me a lot,” she said.

The plan is opposed by the state’s parent-teacher organization along with many school boards and the League of Women Voters. It comes amid growing anger toward school boards over current issues like mask-wearing and teachings regarding social justice and history.

Republican Rep. Spencer Roach is carrying the House version. The resolutions are the latest in a string of efforts to curb local school board power. Most school boards are opposed to the bills.