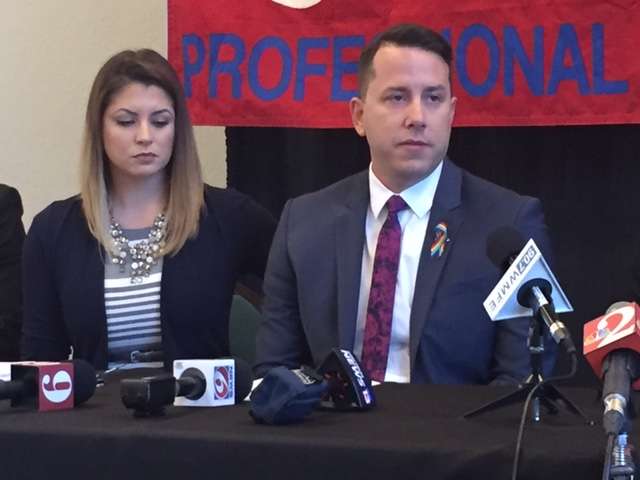 Joshua Granada, right, filed a workers' compensation claim and a union grievance asking to be reinstated as an engineer and paramedic. Grenada was fired after recording audio of City Commissioner Regina Hill during a medical call. An arbitrator ruled he should get his job back.

Regina Hill said she will press charges against an Orlando firefighter who lost his job after recording the city commissioner during an emergency.

Joshua Granada was fired last week. He said he recorded Hill after responding to a call at a hotel, where she became abusive.

Hill spoke with reporters Friday. She said Granada looked through her belongings on the call.

“He admitted he was looking for paraphernalia and drugs,” Hill said. “I’m saddened. And by this breach of confidentiality, I have decided to fully press charges and prosecute against Mr. Granada against his illegal actions.”

Hill also plans a civil lawsuit. She did not respond to questions about her own behavior.

“That evening, which it was in the afternoon when they came, I was also grieving the loss of my beloved daughter that was the eve of the two years of her tragic death,” Hill said.

Geoff Bichler, Granada’s attorney, said no criminal violation took place. He said Granada recorded the belligerent commissioner for his own protection in the same way police officers rely on body cameras to protect against false accusations.

“It would be up to the state attorney to investigate it and determine if charges are warranted,” Bichler said. “That issue was looked into quite some time ago, and it was determined there was no criminal violation. So I think that’s a really baseless assertion.”

“Commissioner Hill came to OPD Headquarters this morning and expressed that she wanted to press criminal charges,” wrote Michelle Guido, a spokeswoman for the department. “A detective will meet with her and take a statement and the process will move forward from there.”