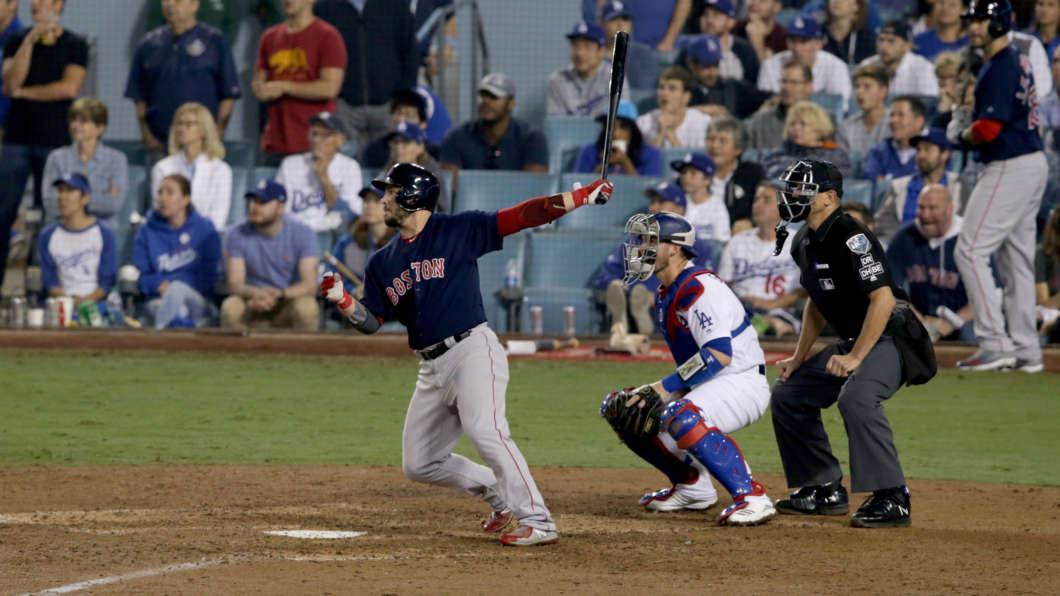 Steve Pearce of the Boston Red Sox hits a three-run double in the ninth inning against the Los Angeles Dodgers in Game 4 of the World Series at Dodger Stadium Saturday.
Image credit: Jeff Gross

The Boston Red Sox stand one win away from their ninth World Series title after defeating the Los Angeles Dodgers 9-6 in Game 4 of the best of seven contest.

Los Angeles third baseman Justin Turner took the game’s first run in the bottom of the sixth and the Dodgers took a 4-0 lead when right-fielder Yasiel Puig hit a three-run homer off of Boston’s Eduardo Rodriguez — who slammed his glove in frustration.

But Boston pinch-hitter Mitch Moreland made his own three-run homer, landing in the right field seats, at the top of the seventh.

But instead of Friday night’s tied game, which lasted more than seven hours by the time the Dodgers’ Max Muncy hit a walk-off home run in the 18th inning, Saturday night’s game took a turn for Boston with a five-run rally in the top of the ninth.

Pearce scored the fifth run of the top of the ninth on a single from Xander Bogaerts.

The Dodgers’ Enrique Hernández put less distance between the run totals with a two-run homer in the bottom of the ninth, but it wasn’t enough to overcome Boston’s lead.

Game 5 is Sunday, again in Los Angeles, where the Red Sox have the chance to win their fourth World Series since 2004.

Only six teams have overcome a 3-1 series deficit to win the World Series, according to The Associated Press. If Los Angeles were to come back it would be their first World Series win since 1988.