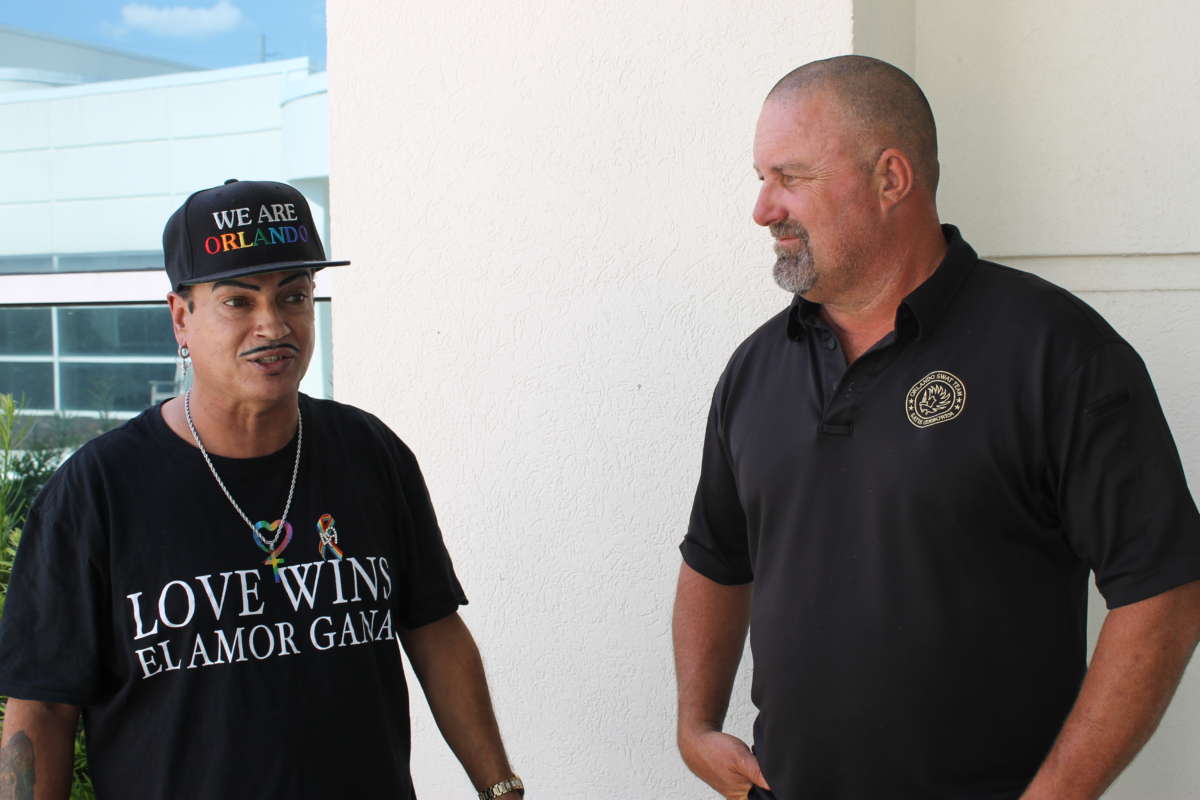 Orlando Torres spent nearly three hours inside a bathroom at Pulse nightclub desperately trying not to attract the attention of the gunman.

SWAT Officer Timothy Stanley and his partner James Parker rescued Torres after the gunman was killed by police five years ago. But the two didn’t reconnect until a fashion show in November of 2016.

That’s when Torres recognized the voice of the officers who had saved him. So he shouted “soldier!” to get their attention – the very thing James Parker had yelled at him during the rescue.

“And as soon as he said that, I said James (Parker), that’s what you were screaming in the bathroom,” Stanley recalled.  “Crazy.”

When police punched a hole in the wall, it broke a water line and the bathroom where Orlando Torres was hiding began flooding with water. But Torres couldn’t move because his body was numb from lying still for three hours.

“They were trying to motivate me by saying ‘soldier, soldier, push yourself up,'” Torres said. “I remember those words clearly. I’m like ‘No, I can’t, I can’t,’ and so they grabbed my right arm and pulled me up from the floor.”

Stanley said that in reality, his partner James Parker wasn’t calling Torres soldier to motivate him. The event was so traumatic that Parker, an Army veteran, clicked back into his military training.

For Torres, being able to thank the people who rescued him was very touching. “You just don’t know what to say,” Torres said. “I’m already feeling emotional just thinking about that.”

Listen to the full interview with Orlando Torres and Tim Stanley here:

Because the FBI was investigating the Pulse nightclub shooting, police officers and victims weren’t allowed to talk to each other. Stanley said meeting Torres at the fashion show was a turning point for the mental health of some officers struggling after Pulse.

“In our profession, they like to hide it,” Stanley said. “Like they want to be all macho and stuff like that. But it will destroy lives. I always talk about take care of our own. Getting together with the victims, that was the first time. We’ve never done that before. We did the fashion show and I will tell you, it saved a lot of the officers’ lives. Their mindset that we circled back, met Orlando and a lot of other people that we rescued, it was closure. For everybody.”

Five years later, Stanley is retired from the Orlando Police Department. He now works for the Florida Department of Law Enforcement, doing training across the state on how to respond to mass shootings.

Torres drives for a rideshare company. He often wears a hat emblazoned with the words Pulse Survivor. He says when people find out that he’s a Pulse survivor, he gives them a simple piece of advice: Know your exits. But five years later, Torres still goes out to nightclubs.

“People say ‘how do you do that?’ knowing what you’ve been through,” Torres said. “I tell people that our motto here in Orlando is ‘keep dancing, Orlando.” Because if you don’t, they win.”

Torres and Stanley spoke at WMFE studios. See below for a condensed version of that interview.