Puerto Ricans Attracted To Orlando For Jobs And Hot Weather 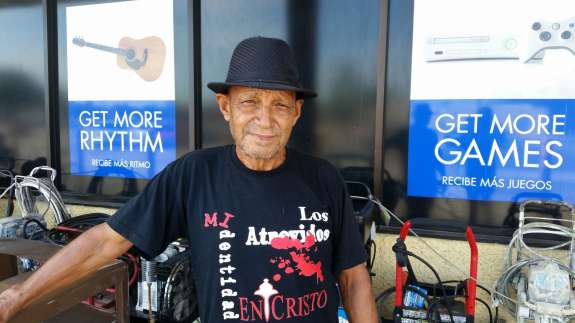 Miguel Adorno came to Orlando from Puerto Rico in 1991.

New Census figures show central Florida was the top destination for Puerto Ricans moving to the mainland from the San Juan area in 2013. New York was second.

Raul Estape left Puerto Rico in 2003. He was working for his dad’s business and it was flailing. Estape is now a manager at a Cash America pawn shop. He said safety, good schools and work opportunities attracted him to Orlando. Estape admits it was hard to leave the beauty of the island.

“The beaches and all the amenities that we have back there, yes it was, but I mean we’re just looking for a better place and a better life,” said Estape.

He said he might return to Puerto Rico when he retires. He still has a beach house there. Outside the shop, Miguel Adorno pedals in on his bicycle wearing a black fedora. He came to Orlando in 1991 from Puerto Rico.

He said in Spanish,“One reason is the climate, the majority of Puerto Ricans don’t like the cold, no, the people before liked the cold but the majority now don’t like it and the ones that choose to come here, well they stay. The same climate here is in Puerto Rico, in general there’s not any difference.”

Adorno says finding construction work in Orlando has never been a problem. He pedals away but not before saying the one thing he wishes he had, as a U.S. citizen, was the opportunity to vote for president.