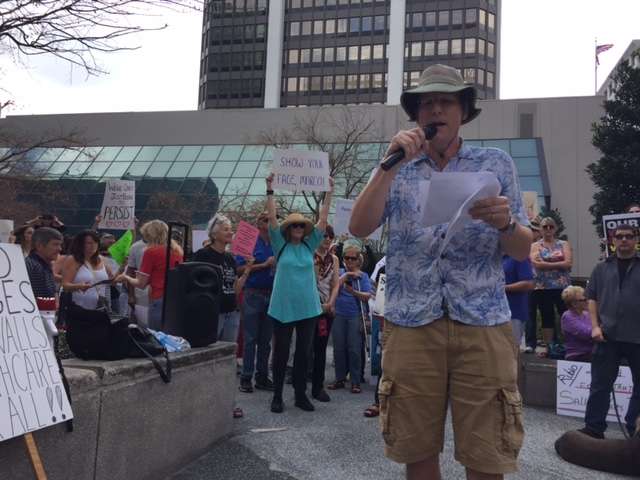 More than 100 protesters gathered in downtown Orlando Tuesday in front of Senator Marco Rubio’s office, chanting that they want the Florida senator to hold a town hall.

The crowd was a mix of young and old, Republican and Democrat. Several protesters wore the pink-eared “pussyhats,” the answer to Donald Trump’s red Make America Great hats.

The protesters want Marco Rubio to meet his constituents in person at a town hall. Their biggest concerns? Standing up to Donald Trump, investigating ties to between the Trump administration and Russia, and not repealing the Affordable Care Act without a replacement.

Retired engineer Rick Ashby was one of the Republicans at the rally.

“They literally want to take away health care from some 20 million Americans,” Ashby said. “And they don’t really care, apparently, if they have health care or not. They just want to give a tax break to the top one half of one percent.”

Ashby asked the crowd how many of those at the protest had never protested or called a congressman before last November’s election. Most in the crowd raised their hands.

“ObamaCare has led to rising premiums, fewer choices for patients, and a collapsing individual insurance market,” Rubio said in a statement. “The law is an absolute failure, but its defenders insist it must be salvaged with a taxpayer-funded bailout of health insurance companies. We need a better system that actually works, and that’s why I support replacing ‎ObamaCare with a patient-centered system that expands access to health care providers and lowers the cost of care.”