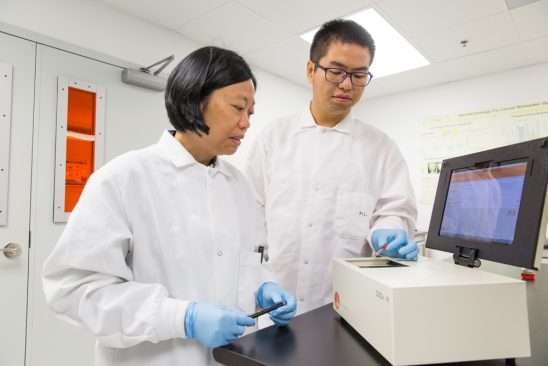 Qun Treen Huo, left, is the lead researcher on a project that could bring a rapid Zika test to market in 2018. (Photo Courtesy UCF)

Hospitals and health departments could have a new tool in 2018 to detect Zika – a test that is cheap, portable and fast.

The test involves a drop of blood, can get results in 20 minutes and doesn’t require blood be sent out to a lab. It was developed by a team of University of Central Florida researchers led by Qun Treen Huo.

Huo said the test is ideal for rural and low-income areas because it’s cheap and portable.

“We really want to put this test for rural area that don’t have access to expensive lab facility,” Huo said. “It’s a very simple test, does a quick test, our device is portable as well.”

Nano Discovery, a spinoff biotech company out of the University of Central Florida, said the test involves gold nanoparticles that are used to detect the Zika virus in a few drops of blood. The company also manufactures the machines that do the test.

Researchers optimistically hope to have U.S. Food and Drug Administration approval and have the test on the market by mid-2018. In the future, Huo said the same technology can be used to look for other viruses, and her team has been researching it’s use for cancer screening as well.

“This basically test technology we developed is not only limited to Zika. It can be for many other infectious diseases,” Huo said.

Zika is a mild virus in adults, but can cause a myriad of birth defects in babies if a mother catches it during pregnancy. It’s primarily spread by mosquitoes but can be transmitted sexually as well.