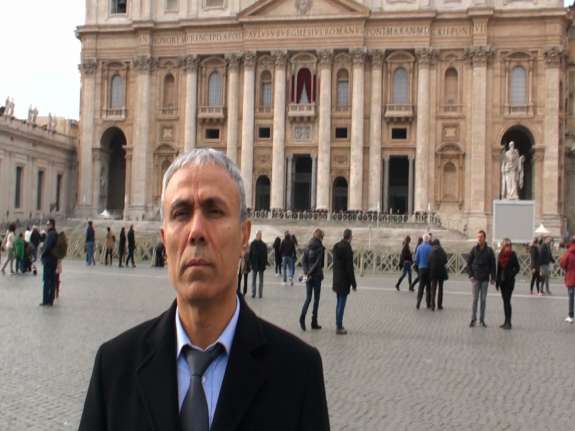 In this image taken from a video provided by Adnkronos International, Ali Agca stands in front of St. Peter's Basilica at the Vatican, on Saturday. Agca, who tried to assassinate Pope John Paul II in 1981, laid flowers at the late pontiff's tomb.

The Turkish man who tried to kill Pope John Paul II and subsequently spent three decades in jail, has laid flowers at the tomb of the former pontiff.

Mehmet Ali Ağca shot John Paul twice at close range on May 13, 1981 as the pope was traveling in an open car through St. Peter’s Square in Vatican City, an attack that left the pope in critical condition.

The gunman was quickly arrested. John Paul recovered and later met Ağca in prison, where the pontiff forgave his would-be killer.

At the time of the shooting, Ağca, now 56, had been a member of the right-wing Turkish nationalist group known as the Grey Wolves. He was sentenced to life in prison for the attempt on the pope’s life as well as for the murder of a Turkish journalist two years before. He was subsequently released in 2010.

“Ağca called the Italian daily la Repubblica on Saturday to announce he had arrived in the Vatican, his first visit since the assassination attempt and exactly 31 years after John Paul met him in prison.

“The visit was confirmed to Reuters by Father Ciro Benedettini, the Vatican’s deputy spokesman, who said Ağca stood for a few moments in silent meditation over the tomb in St. Peter’s Basilica before leaving two bunches of white roses.”

By way of background, Newsweek writes:

“The assassination attempt prompted the Vatican to add glass to the vehicle used to transport the pope during public visits, nicknamed the ‘Popemobile.’ Pope Francis said this year it is his preference not to use the bulletproof vehicle because it distances him from people.

“It’s still unclear why Ağca attempted to assassinate the pope; originally, he testified that he had been on a solo mission. Later on, he said that the attack had been planned by Soviet and Bulgarian secret services. A 2006 investigation led by an Italian parliamentary commission corroborates said claim; the investigative team said the attack had been orchestrated by former Soviet Union leaders ‘beyond a reasonable doubt.’ At the time, Ağca … was sought by Turkish police for various crimes, including armed robbery, when he attempted to murder the Pope.”