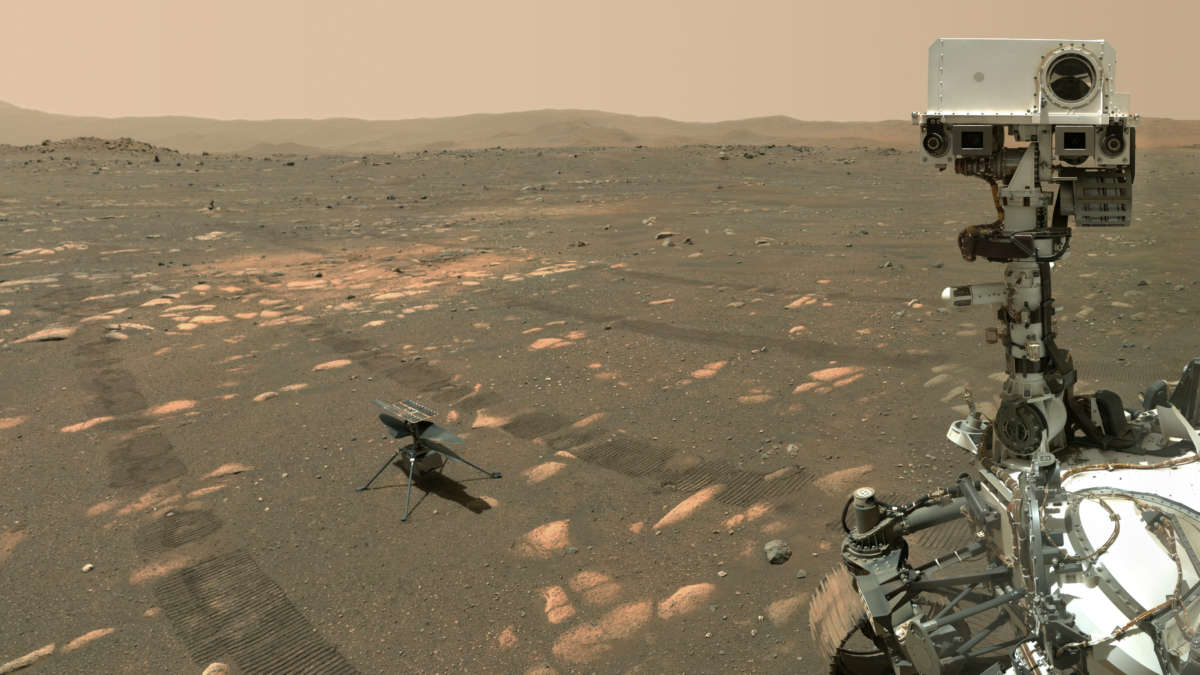 A tiny helicopter on Mars could take its first flight as early as Sunday, marking the first powered flight on another planet. On board that helicopter is an even tinier piece of fabric. A piece can be found here on Earth, in Orlando.

WMFE’s Brendan Byrne spoke with Nicole Darden Creston to explain why NASA sent a little drone to the red planet and how that tiny swatch of fabric ties into Orlando. Brendan, thanks for joining us.

NICOLE DARDEN CRESTON: So tell me about this helicopter. Why did NASA send it to Mars in the first place?

BRENDAN BYRNE: Ingenuity is about the size of a tissue box and it hitched a ride to Mars on the belly of the Perseverance rover — you’ll remember that launched from Cape Canaveral last year and landed on the red planet back in February. Well Ingenuity is what NASA is calling a tech demonstration. As you mentioned, if all goes according to plan, this will be the first aircraft to achieve powered flight on another planet.

CRESTON: Why is this important? What is NASA aiming to demonstrate with this flight?

BYRNE: Mars has a really thin atmosphere. It’s not like ours here on Earth. Achieving powered flight is difficult. If you remember, the rover had to use a system of a parachute and a rocket-powered crane to land safety on the surface — the atmosphere was too thin for a parachute alone to slow it down. Similarly, there’s not much for those propeller blades to grab onto in that thin air, so Ingenuity will prove that powered flight is possible and pave the way for future aerial explorers.

CRESTON: The team is targeting no earlier than Sunday to test Ingenuity. What’s the plan?

BYRNE: Perseverance already dropped the helicopter off at the test site and drove away. Ingenuity passed one of the most difficult milestones yet, surviving the Martian night. It can get down to negative 170 degrees Fahrenheit in Jezero crater so the fact that the little bugger made it through that first night is a good sign. The team has also been performing diagnostic tests on the systems before that first flight, and all is good!

CRESTON: Tell me about the flight. What can we expect?

BYRNE: Ingenuity will make a series of flights over the course of its 30-day testing window. The team says there will be a handful of these test flights. Its first flight will last only about 30 seconds and get about 10 feet off the ground. But future flights could last longer and go a little higher, hovering around two to three stories high in the Martian air.

CRESTON: We mentioned this mission is related to a piece of fabric here in Orlando. What’s that all about?

BYRNE: Ingenuity is carrying a tiny piece of fabric that came from the Wright Flyer…that’s the Wright Brothers airplane that made the first powered flight here on Earth back in 1903. That fabric is not stranger to exploration. A portion of it went to the moon with Neil Armstrong and Buzz Aldrin on Apollo 11…and a portion of that fabric made its way to Sharon Hagle who runs SpaceKids Global, a STEM education outreach program. It was given to her by Mark and Rick Armstrong, Neil’s sons to allow kids to get a closer look at history.

CRESTON: So where is that fabric now?

BYRNE: It’s on display at the Orlando Science Center, donated by SpaceKids Global. The center’s Jeff Stanford says it’s on display — along with a flown Apollo 11 patch — right outside an exhibit on flight. He says he wants the exhibit to inspire curiosity and exploration to those that see it.

SANFORD: What we also hope that we achieve is to remind people that it was only 66 years from our first powered flight to walking on the moon. And and what a tremendous accomplishment in that timeframe. And now, we’re barely a century away from that first flight.

CRESTON: And what about the piece on Mars, attached to Ingenuity?

BYRNE: Well, that will stay there. There’s no plans to recover or even fly Ingenuity again after its test window. So that piece of fabric will remain on Mars until human explorers get the chance to visit it. Maybe in the not so distant future.

CRESTON: Brendan Byrne covers space for WMFE and hosts our weekly podcast and radio show Are We There Yet. Brendan, thanks for joining us.