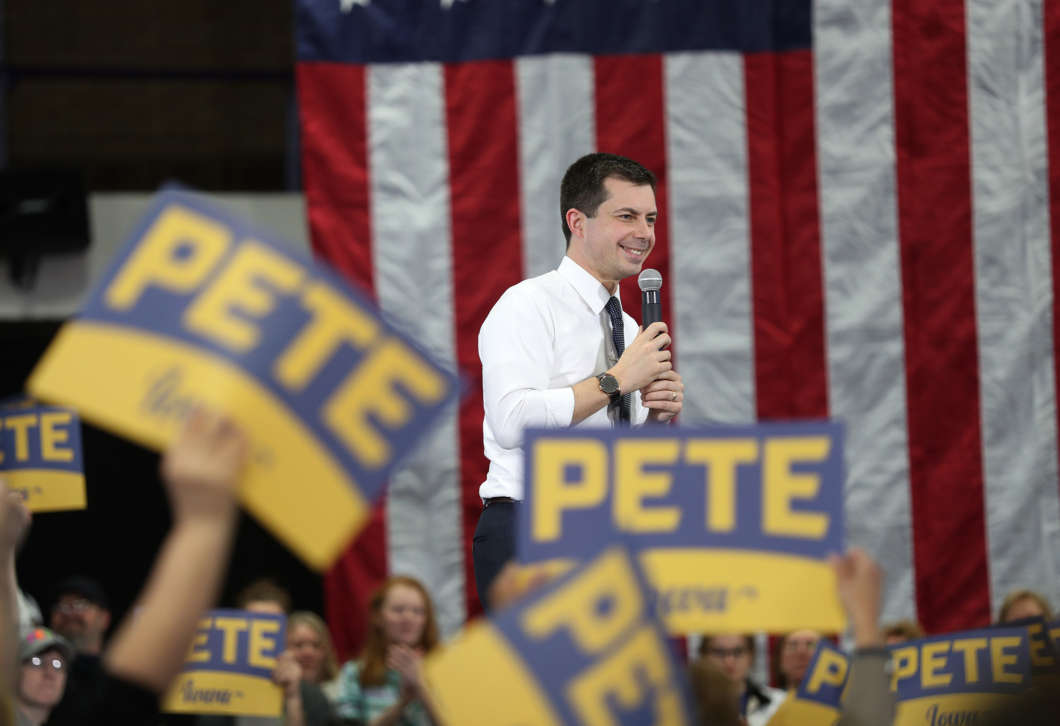 Pete Buttigieg, the 38-year-old who rose from mayor of a midsize Indiana city to a serious presidential contender, officially suspended his campaign on Sunday evening.

“The truth is that the path has narrowed to a close,” Buttigieg told a crowd in his hometown of South Bend, Ind., after an introduction by his husband, Chasten. “We have a responsibility to consider the effect of remaining in this race any further.”

On Sunday night, Buttigieg thanked supporters for the campaign they helped build and said that effort to usher in a new generation of politics will continue.

“I firmly believe that in these years, in our time, we can and we will make American life and politics more like what it could be — not just more wise and more prosperous, but more equitable and more just and more decent,” he said, as supporters cheered and chanted “BOOT-EDGE-EGE.”

Before Buttigieg took the stage, his husband, Chasten, gave an emotional speech, emphasizing the historic weight of the campaign and the significance of the first openly gay candidate to make a serious run at a major party’s nomination for president. His voice wavered at several points, and he paused to wipe tears.

“Life gave me some interesting experiences on my way to find Pete,” he said. “After falling in love with Pete, Pete got me to believe in myself again. And I told Pete to run because I knew there were other kids sitting out there in this country who needed to believe in themselves, too.”

Buttigieg recognized that significance, too.

“We sent a message to every kid out there, wondering if whatever marks them out as different means they are somehow destined to be less than, to see that someone who once felt that exact same way can become a leading presidential candidate with his husband at his side,” he said.

The announcement came a day after Buttigieg finished fourth in South Carolina’s Democratic primary, the party’s fourth nominating contest. Buttigieg had finished in a virtual tie in Iowa’s caucuses, then second in New Hampshire and third in Nevada.

Iowa and New Hampshire are predominantly white states, but Buttigieg struggled to attract support in the more diverse states of Nevada and South Carolina. According to exit polls, he earned the backing of just 3% of African American voters in South Carolina; black voters made up a majority of the Democratic electorate in Saturday’s primary.

Buttigieg spent the final day of his campaign meeting with former President Jimmy Carter in Georgia, and then marching across the Edmund Pettus Bridge in Selma, Ala., an annual commemoration of Bloody Sunday. He said walking in the shadow of civil rights giants had him thinking about how the nation might now try to live up to their example.

Buttigieg’s departure could help boost Biden, who has been competing for some of the same moderate voters and is trying to catch up to Sanders’ delegate lead on Super Tuesday.

The Sanders campaign is pushing back on the idea that the shake-up hurts Sanders more than anyone else.

“His supporters are going to be more up for grabs,” Sanders’ campaign manager, Faiz Shakir, told NPR. “I think people are far more complicated in their ideology than pundits like to suggest.”

Buttigieg made the announcement at the Century Center in South Bend, the venue where he held a launch event for his book last February before jumping into the race. Back then, there was no national press — mostly local South Bend television affiliates. A year later, Buttigieg outlasted most of a crowded Democratic field and often drew rally crowds that topped 1,000.

On Sunday night, the former mayor joked about his relative anonymity when he decided to run last year: “Hardly anybody knew my name, and even fewer could pronounce it. First name Mayor, last name Pete.”

A graduate of Harvard and Oxford and a veteran of the war in Afghanistan, Buttigieg spent eight years in office in South Bend and gained national recognition in 2017 during an unsuccessful bid to serve as chairman of the Democratic National Committee.

When he first announced his candidacy for president last year, Buttigieg was perceived as a little-known long shot focused on what he calls “intergenerational justice,” but he quickly emerged among the front-runners in the crowded Democratic field with his moderate, future-focused message.

But Buttigieg was dogged by questions about his handling of high-profile racial incidents involving the police during his tenure as mayor. He also faced scrutiny over his brief tenure at the consulting firm McKinsey, prompting the release of a list of nine of his former clients. And fellow candidates pressured him to open his fundraisers to reporters and provide more information about the people raising money for his presidential campaign.

But before that, speaking to NPR’s Steve Inskeep in January 2019, he said he understood his campaign was an “underdog project.”

“But I also don’t think that you should ever run for any office that you do not seek to win,” he said.

“Mayor Buttigieg ran an incredible campaign that broke glass ceilings and inspired countless LGBTQ people to run for office and enter public service,” he wrote. “His history-making, open and honest campaign gave representation to a community that has been for long far too long pushed out of the spotlight. He gave a voice to millions across the country, to issues often ignored.”

With additional reporting by NPR’s Asma Khalid and Scott Detrow