Pandemic anxiety was hard on IBS patients. Here’s how to find relief 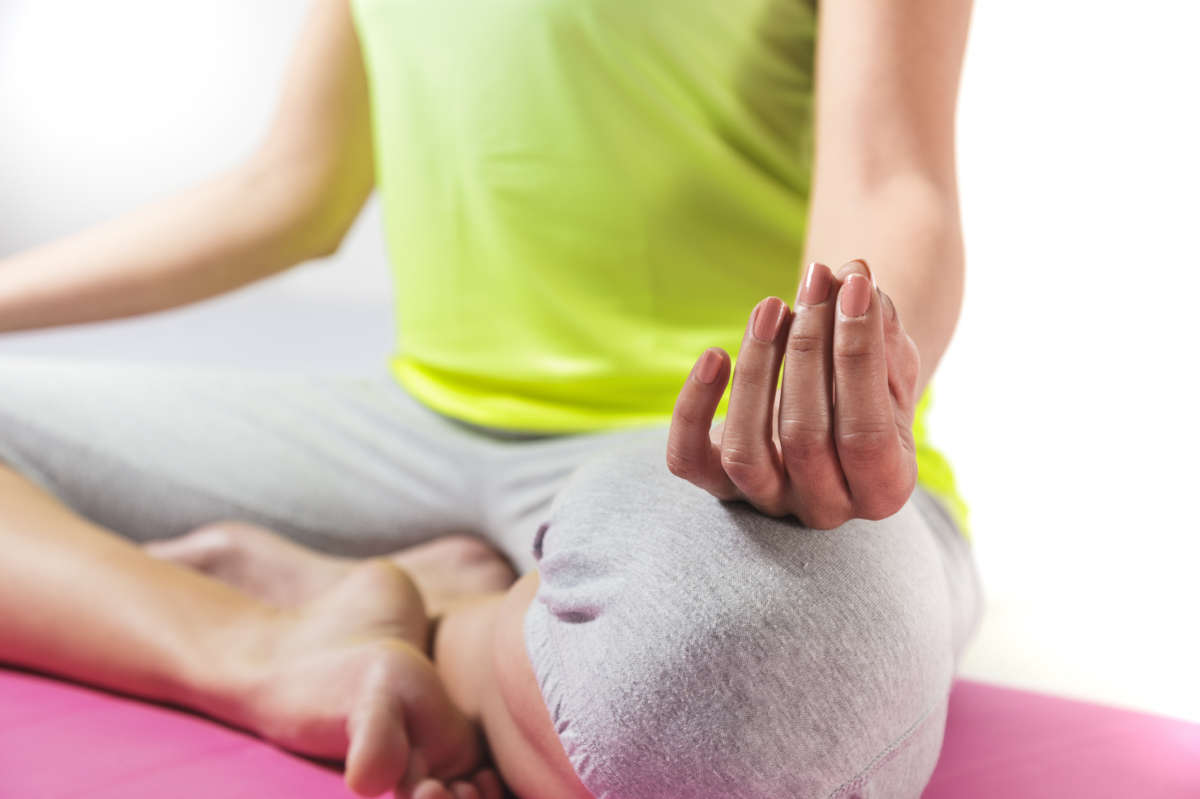 Millions of Americans have irritable bowel syndrome and the stress of the past two years may have exacerbated stomach issues. There are ways to help, including meditation and practicing mindfulness.
Image credit: Alvaro Tejero/EyeEm

If you’re one of the more than 25 million people in the U.S. with irritable bowel syndrome, there’s a good chance your symptoms worsened at some point over the past two years. Or maybe you developed symptoms for the first time.

“We found reports of increased constipation, diarrhea and abdominal pain,” says Kendra Kamp, a researcher at the University of Washington School of Medicine. She surveyed IBS patients with anxiety or depression about their experiences early in the pandemic. More than 90% reported increased stress and 81% reported increased anxiety. Another survey sponsored by a pharmaceutical company found half of IBS patients say their symptoms have been more challenging to manage, and many reported an initial onset of IBS amid the pandemic.

“The pandemic created an environment of uncertainty, isolation and less access to supportive resources that people depended on for well-being,” says Suzanne Smith, a nurse practitioner at UCLA’s Integrative Digestive Health and Wellness program. The center combines diet and stress management treatment approaches, and Smith helps patients understand the brain-gut connection in IBS.

IBS was once considered a problem of the gut, but scientists now know that disturbances in the way the nervous system, brain and gut interact can cause changes that lead to IBS symptoms, including stomach pain, gas, bloating and abnormal bowel movements. “There’s a continuous feedback loop between the brain and the gut,” explains Smith. Information flows along the vagus nerve, which connects brain to gut, so what’s happening in the mind affects the gastrointestinal system.

Stress is one factor that can trigger symptoms or make them harder to manage. Diet, sleep, exercise and social connections are important, too. “All these things play a role in digestive health,” Smith says.

Doctors also look for triggers such as an infection or bacterial overgrowth that can require antibiotics, but the goal, Smith says, is to wrap all the elements into a holistic treatment approach.

Smith teaches a mindfulness course that can help patients tamp down the anxiety linked to their symptoms. In 2020, a study of patients who participated in the 8-week course, called Mindfulness Based Stress Reduction, found that 71% of the patients had robust improvements in their GI symptoms. “There was a significant improvement in quality of life and overall well-being,” Smith says. The participants were taught a range of techniques to foster awareness of the present moment, limit anticipatory anxiety, and halt the feedback loop that can amplify the unpleasant feelings and sensations associated with IBS symptoms.

“It was life-changing for me,” says Vicki Mayer, 52, who was a participant in the study. She first noticed stomach issues, on and off, back in college, but in recent years her symptoms worsened. “Any time that I was going out for dinner or lunch or coffee, I would be riddled with a lot of anxiety and fear,” she recalls, anticipating that she may need to urgently find a bathroom or leave the restaurant. She began to avoid going out.

When her doctor recommended the mindfulness class, she was hesitant. “I was probably the most skeptical person in the room,” she recalls. “I thought, ‘Oh, I’ll have to lay down for an hour. I can’t keep my mind completely quiet.'”

But after the class began, she was hooked. “We would practice different types of meditation, whether it was a body scan, a three minute breathing exercise, or a walking meditation,” Mayer says, further explaining that each of these techniques awakened a sense of calm and a new way to tune into her body.

Meditation didn’t change her symptoms overnight, but she did begin feeling control over her emotional reactions. She realized much of her anxiety was caused by worst-case scenario thinking, such as anticipating an embarrassing restaurant incident. But, if she stayed in the moment, the situation really wasn’t so dire. And, instead of allowing her mind to weave a story about what might happen, she learned to reframe her thoughts.

“I’m going to be OK, there’s always a bathroom available,” she would tell herself if she went out for a meal, recognizing that excusing herself from the table would cause no harm. “Once I changed my mindset, I had a far reduced level of anxiety, and I could get through the meal with little to no issues.”

Studies show that mindfulness can increase both attention and emotional regulation. “If you have a better capacity to regulate your attention, then you can move your attention to something that’s more helpful,” says Smith, just as Mayer learned.

Mayer says she feels much better these days. “It’s incredibly powerful to know how to change your mindset and see the physical results of that in a positive way,” she says. And, she’s keeping up the meditation practice: “You can do a one or two minute breathing exercise while you’re standing in line at the grocery store.”

The power of the right diet

Changing what’s on the menu is another key tool for people to manage IBS. “We’ve developed diet strategies that can be quite effective,” says William Chey, a gastroenterologist at the University of Michigan who has documented the benefits of integrative care.

Over the past 15 years, many studies have shown that dietary strategies can help control symptoms.

The FODMAP diet has gained the most attention from researchers. Studies show somewhere between 52% to 86% of participants report significant improvement in their symptoms after following the diet, including reduced gas and bloating. The FODMAP diet requires elimination or reduction of certain foods, including gluten, lactose, excess fructose (found in some fruits and corn syrup) as well as certain nuts, beans and starchy vegetables. Researchers at Monash University in Australia explain that the FODMAP diet is based on the understanding that certain compounds in our diet can’t be completely digested or absorbed, so they can end up in the large intestine where they’re fermented by gut bacteria. This leads to gas and bloating.

“I saw the benefits almost within the first week,” says Karen Beningo of Northville, Mich., who was treated at the University of Michigan. She started the FODMAP diet last October and found her energy level improved significantly. “The distension and the bloating went away very quick,” she says. After following the diet strictly, she’s now added some foods back to her diet. She knows gluten is a trigger, so she remains gluten-free.

“I discovered other things, and most of them were things that I was suspicious of anyway,” she says. She realized that onions, broccoli and Brussels sprouts, as well as some nuts, make her gassy. “And it was only through calming down my system and then reintroducing [them] that I pretty much confirmed, yeah, I’ve got a problem with those things,” she explains. (This Monash University FODMAP app can help people follow the diet, detailing which foods, in which amounts, are ok, and which ones should be avoided.)

Where to get help

Beningo was fortunate to live near a major academic center. The University of Michigan has registered dieticians in their GI program who can support patients through diet changes, which can be somewhat frustrating and confusing to follow. But what can people do if they don’t have access to this type of integrative care?

The majority of gastroenterology practices don’t have a registered dietician, psychologist or stress-management professional on staff. “Most doctors don’t have the tools or the training to be able to effectively implement the science as it’s emerging in their practices,” Chey says.

To fill in the gaps, there’s a shift toward virtual support to help people access behavioral care, stress management tools and dietary strategies. “Digital tools that are coming online will help these integrated strategies scale up to a more national level,” Chey says. He points to three examples. Mahana is an FDA-authorized digital Cognitive Behavioral Therapy app that doctors can prescribe to IBS patients to deal with stress. Zemedy is another CBT-based digital app. There’s also Nerva, a mobile app that delivers gut-directed hypnotherapy to help manage symptoms.

“Those three are all evidence based, meaning that they’ve all done at least observational clinical trials to show efficacy,” Chey says. And there are many more digital products in development, he says, adding that he’s involved with some of the companies as an investigator. Chey says large-scale clinical trials with some of the tools are planned to better understand how to effectively use them. “This is a very rapidly growing space,” he says.