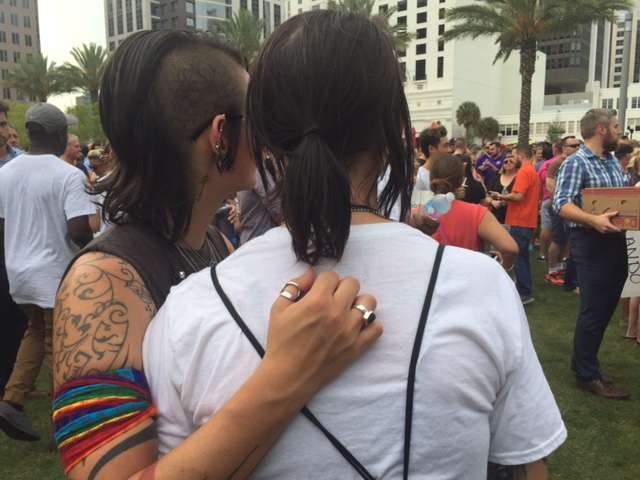 Investigators are searching for a clear motive as Orlando and the world mourn the deaths of the 49 killed at the Pulse nightclub. As they search for answers, Orlando grieves.

Creston: Catherine, let’s start with the latest on the shooting … what are we hearing from law enforcement?

Welch: The FBI says 29-year-old Omar Mateen appears to be a “homegrown extremist” … he had touted support for other terrorists groups but the FBI said there’s no indication he was directed from outside the country. I talked with Orlando Mayor Buddy Dyer yesterday. Here’s the questions he still has about the tragic shooting:

“I think there are some things that we’re never going to know which is why did he pick the nightclub and location that he did? Why did he drive an hour and a half north to Orlando versus committing the crime right where he lived or going south or going east? Those are a couple things I’d like to know,” said Dyer.

Welch: Investigators have those same questions and details are starting to emerge that may provide answers. FBI Director James Comey said they’re trying to determine whether Mateen scouted Disney as a target as People.com is reporting. The Orlando Sentinel and other news outlets are reporting that the shooter had been seen at the bar a number of times. Questions are emerging about whether Mateen was struggling with his own sexuality.

Creston: We’re getting a better sense of what happened, especially between the hours of 2 and 5 o’clock in the morning … with the first shots fired at 2 a.m. Sunday. What do we know?

Welch: Nicole, we know the off duty officer working security and the shooter backed into the club and into the bathroom where it then became a hostage situation. At 5 o’clock officers blasted their way in … killing the shooter. There are questions about what happened between 2 and 5 … reporters are doing forensics on Twitter trying to figure out whether people died during that time … were they shot then or earlier? … I asked Orlando Police Chief John Mina to walk me through those hours.

“It was an active shooter type situation so our officers entered the club engaged in a firefight with him that caused him to retreat to the back bathroom and shut the door, so during that time we were able to save and rescue many, many dozens and dozens of people who were in the lounge and in the bar so it’s my understanding that during that three hours there were no shots fired or otherwise we would have reverted to an active shooter situation and went and got the suspect. So we isolated, we contained and then when he was in that bathroom based on statements that he made at that time and information we had we believe you know future loss of life was imminent so that’s the reason we made the decision to go in at five,” said Mina.

Creston: Orlando Mayor Buddy Dyer has said the 39 of the victims were killed at the club, the others died in the hospital.

Welch: That’s correct. Workers removed bodies from the club four at a time and loaded them into white vans … all of them were at the medical examiner’s office by 11 o’clock Sunday night.

Creston: Thousands turned out to a vigil on the lawn of the Dr. Phillips Center for the Performing Arts. A bell rang out 49 times to remember those killed at the Pulse nightclub. An emotional evening, Catherine you were there ….

Welch: It was extremely emotional … lots of hugs and tears and a visible show of both diversity and solidarity … members of the gay community, Islamic community and Latino community showed up to remember the victims.

“We’re all just human here. Wouldn’t it be great if we could just live in a world where we could be that way without something horrific happening to bring us together like that? This is the Orlando I want to live in. Looking around and just seeing all these people holding hands and being unified,” said Beth Simmons of Sanford.

“It’s hard, I was born and raised here, this is where I came out and did my process. And I know that club is young folks and were going through their process and to be attacked at home,” said James Argabright.

Creston: What did you take away from talking with people at the vigil?

Welch: What struck me was how touched older members of the gay community were by the outpouring of support. Many said they grew up in a time where you could not be out and proud and it was very moving for them to see that Orlando loves all of its children. Most of the younger members of the gay community I spoke with knew the victims or someone who was in the club… and they were overwhelmed with a feeling of not being sure where they can feel safe. There were also members of the Islamic community … women in headscarves known as a hijab … one woman I talked to said people have reacted to her either friendlier or more distant since the shooting.

Creston: Catherine, we’re hearing the president is coming to Orlando.

Welch: Yes. He will be here Thursday, we have yet to get details. White House spokesman Josh Earnest said the president will visit to pay his respects to the families of the victims and stand in solidarity with Orlando.

Creston: Speaking of solidarity … online the hashtag Orlando Strong and Orlando Proud are trending … there were vigils across the country Monday night and the Eiffel Tower was lit in rainbow colors with the mayor saying “Paris stands with Orlando.”

Creston: That’s right and the GoFundMe page to support families of the victims has now raised $2.9 million as of Tuesday morning.

Listen to 90.7 Catherine Welch’s entire interview with the Mayor by clicking on the audio player at the top of this post.