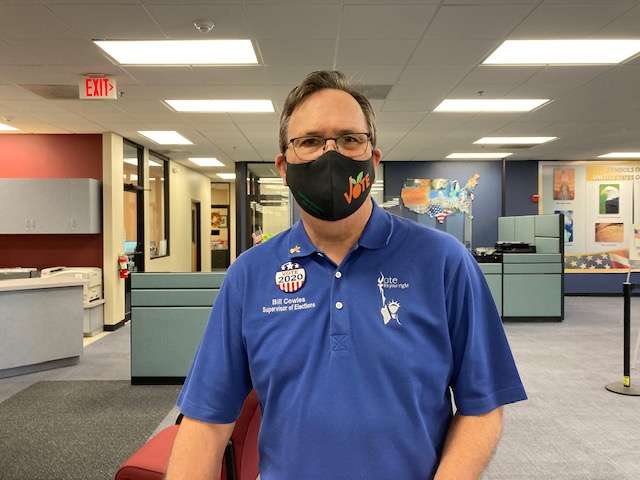 Today is Election Day and polls will remain open through 7 p.m. in Central Florida.

90.7 WMFE spoke to Orange County Supervisor of Elections Bill Cowles about the potential for political unrest, whether tonight will be a late one, and what to bring to the polls if you’re voting for the first time.

Bill: Well, again, we have some built in things. I mean, first off, Florida has a 150 foot no-solicitation area, so that when the voter crosses it, they can’t be campaigned to going in. And outside of it, that’s where voters or people can campaign to the voters. But even with the early voting, we saw that it was pretty respectful. There were just a few minor incidences, but basically, the community has been very good in that area.

Danielle: What’s voter turnout looked like, do you think this could be the highest voter turnout? We’ve heard that from some people?

Bill: Yeah, we already know that right now we’re like 21,000 more voters, we will have hit a new high for the total number of voters. And then we’ll just see how the numbers go today. Percentage-wise, it could put us up into the 80% mark, if we have a good turnout at the polls. And that’s a healthy number. For a county like Orange and for the votes.

Bill: Well, the key thing is if you’ve moved, and you’ve not updated your address with the elections office, you might want to call and change your address, because you can do that over the phone if you’re already registered in Florida. And then you get we’ll tell you where your correct polling place is so that you go to the right place the first time and be able to vote. When you go, you need two forms of ID, you need something with your picture, and something with a signature on it.

And then the other part too, is if you got a sample ballot from us, hopefully you studied it. If not, you can get it off the website, study it, because there are nine amendments on that ballot. And if you walk in and have never looked at those amendments, and you try reading them there, you’re gonna be there a while. So study up and be prepared.

Danielle: Yesterday during the press conference, you said you don’t care who wins, but you just hope they win by a landslide. Can you tell me about any concerns you have after the election day, as we’ve heard this could take awhile?

Bill: Well as a survivor of the 2000 presidential election with that recount. And then in 2018, when we had to do three statewide recounts and one local recount, us election administrators, and I was very clear to say us election administrators, our prayer is we don’t care who wins or loses just win big, because we would like to put this election to bed sooner rather than later. And so that’s what my reference was. But for those who are candidates, and those who are spouses of candidates, or those who are very interested in a race, politically, I understand that, you know, they want to win big but for their candidate.

Danielle: And I guess my last question, what sort of safeguards are in place, so we don’t have another 2000 so that things do go smoothly this time around?

Bill: Well, the Florida Legislature after 2000 really did a great job of streamlining our system. I mean, first off, we are on paper ballots, and paper ballots can be recounted, and you can recreate so we don’t have touchscreens, we don’t have punch cards. So that helps. Also we’ve streamlined our timelines and our processes. And also I think we proved in 2018 that if we have to do it, the system works and we can do it in the timeline that is set out.

If you’d like to listen to the full conversation, click on the clip at the top of the page.