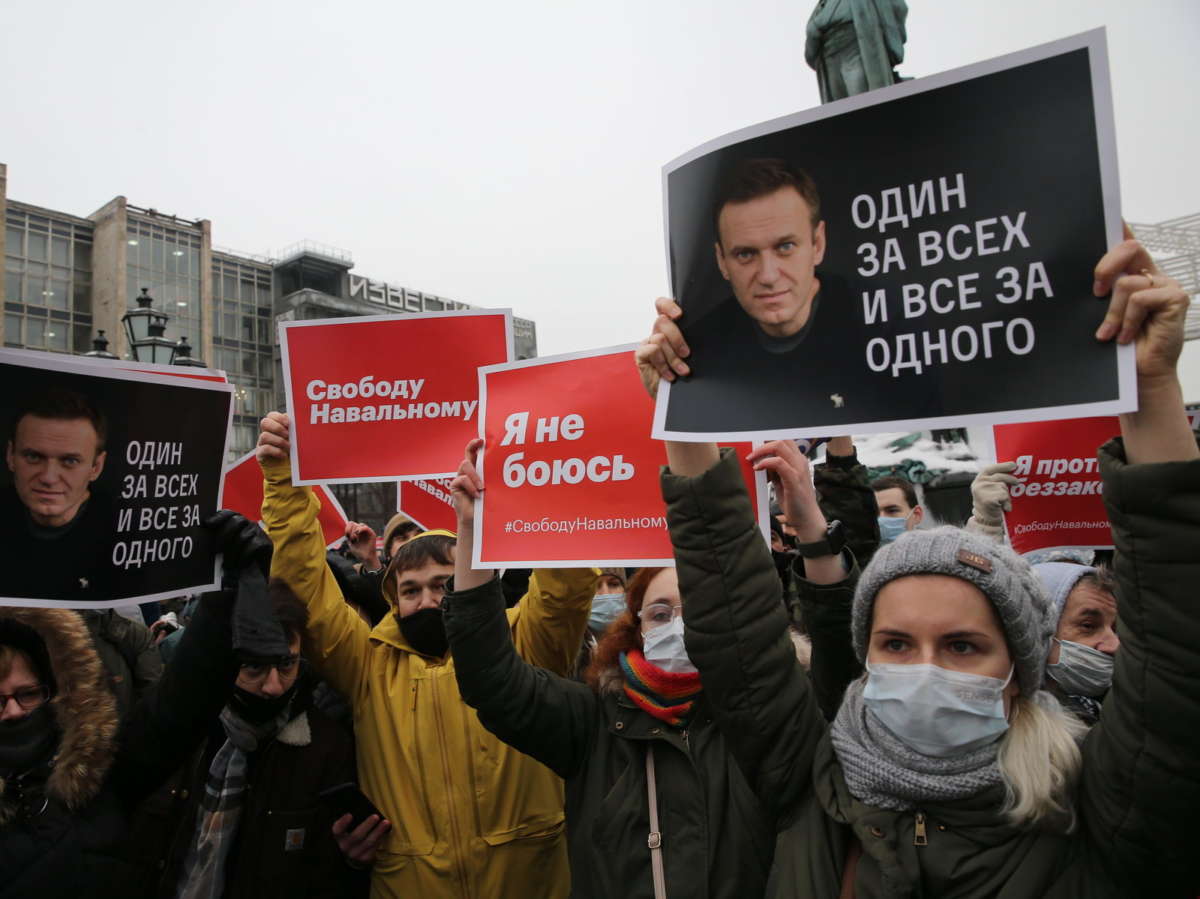 MOSCOW, RUSSIA - JANUARY 23: (RUSSIA OUT)Participants of an unauthorized protest rally against of jailing of oppositon leader Alexei Navalny shout, on January 23, 2021 in Moscow, Russia. Earlier this week, Kremlin-critic Alexei Navalny called for supporters to protest after he was remanded to pre-trial detention for 30 days. His arrest came one day after his return to Russia, following his poisoning with a nerve agent last summer. (Photo by Mikhail Svetlov/Getty Images)

Alexei Navalny wore a dark sweatshirt and a wry smile as he stood in a glass box in a Moscow courtroom this week and was sentenced to 2 years and 8 months in a prison colony for failing to keep a parole appointment.

“This is how it works,” Navalny said from behind the glass. “Imprison one person to frighten millions.”

He couldn’t keep that appointment last Dec. 29 because he was in Berlin, recovering from being poisoned with the nerve agent Novichok — as certified by doctors and the Organization for the Prohibition of Chemical Weapons.

Navalny claims the attack was ordered by the Kremlin.

Russian President Vladimir Putin dismissed the accusation, saying if agents had wanted to assassinate Alexei Navalny, “they probably would have finished the job.”

Alexei Navalny is 44 years old, with a wife and son and daughter. They all live in an apartment in Moscow, when Navalny is not in prison. He has been arrested many times, and was nearly blinded in 2017 when an assailant hurled green dye at his face.

He could have stayed in exile after his most recent recuperation. From Berlin, London, or Connecticut, he could appear on news shows, do a podcast, write an impassioned memoir, and accept honorary degrees in salute of his courage. Instead, he returned home to Vladimir Putin’s iron grasp.

The world has expressed outrage over his attack and the trial. But will that interest be so urgent in a year or two, when Alexei Navalny is deeply invisible to the world and vulnerable inside a Russian prison camp? Just this week, while the world looked elsewhere, the doctor in Omsk, Siberia, who first treated Navalny and helped save his life when he was poisoned last year, died “suddenly” at the age of 55.

This week Alexei Navalny received the court’s sentence in his glass cage as throngs outside called for his freedom, and thousands were arrested.

“I hope very much that people won’t look at this trial as a signal that they should be more afraid. All this,” he said, “the National Guard, the cage, isn’t a demonstration of strength. It’s a show of weakness …”

His words have been quoted around the world, if not in the Russian state press. But I found the most affecting moment was wordless: Alexei Navalny saw his wife, Yulia. He looked at her across the courtroom, held up a finger, and drew a heart against the glass.