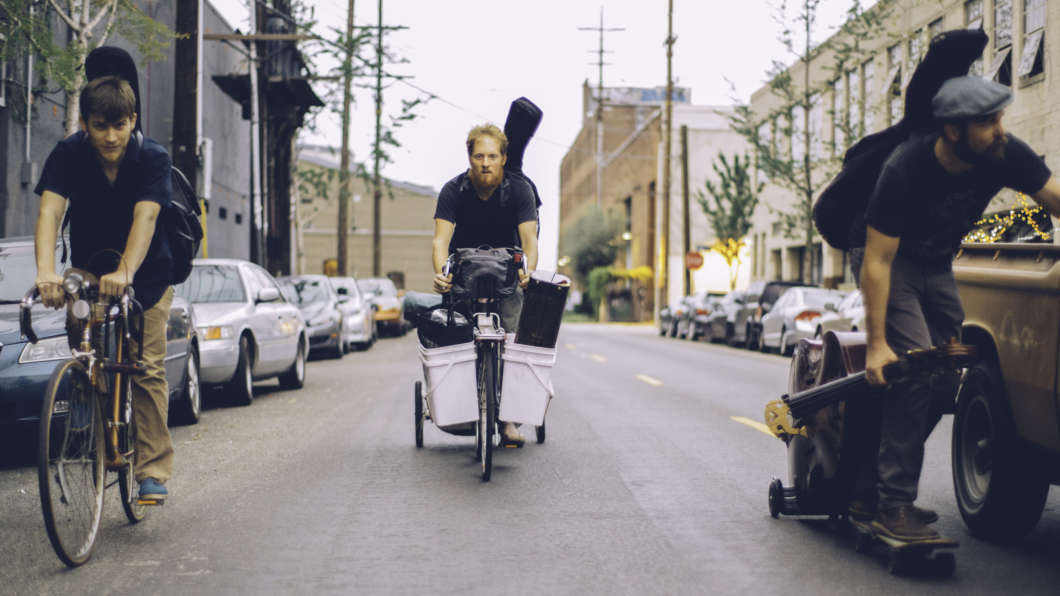 Some musicians arrive at their gigs in a tricked out tour bus. Others, if they’re lucky, in a limo. But there’s a popular band based in downtown Los Angeles that relies on a lower-key, low-carbon form of transportation.

In car-crazy L.A., the band members either bike, walk or skateboard to all of their gigs.

The lively acoustic group, the Vignes Rooftop Revival, began by accident five years ago, on a rooftop of a loft building on Vignes Street in rapidly gentrifying downtown Los Angeles.

A group of neighbors, including musician Erik Miron, would enjoy meals with other building residents, as the dramatic city skyline shimmered in the background.

“After awhile the instruments would come out,” said Miron, who came to Los Angeles to study music at the University of Southern California. “We’d start goofing around and it evolved into something where we decided to take it down from the roof to the bars and restaurants.”

Bars and restaurants have been mushrooming up all over this once dreary part of the city. Glassy towers sprouting up from parking lots and warehouses reincarnated as trendy lofts, galleries and wineries mean there are now dozens of places to play in an area that was, until fairly recently, a place people went out of their way to avoid.

One gig led to another, and accompanied by a rotating cast of musical friends, the band now play 200 shows a year.

That a homespun jazz band stays so busy is one kind of impressive.

Its carbon footprint is another.

“It’s funny. We’re almost like an Amish jazz band,” said Miron, who has a full, wiry beard that makes him look right out of Pennsylvania Dutch country. “We don’t use cars or electricity so much.”

Miron said the Vignes Revival didn’t set out to be so green. He and the core members of the group just found it easier to get around without the use of a car.

The challenge of navigating the city streets, he said, reminds him of the white water rafting he did as a kid growing up in Montana. Plus, driving a car leaves him “mildly grumpy,” while arriving by bicycle, he said, is a refreshing way to indulge his love of being outdoors.

“It’s nice to move under your own power,” he said, as he loaded up his guitar, banjo and trumpet in a trailer he hitches up to his bicycle. He also adds in a few succulents in pots adorned with the band’s logo for good measure. At each show, they give them away.

Neighbors stop to wish them well as they gather in the alley behind their building to head to a show. As they navigate the streets, onlookers don’t pay them any mind, but band mate and guitarist Patrick Torres says sometimes people shout out in recognition. It gives the city a small-town feel, he said.

“Los Angeles isn’t as bad as some people might think for biking,” he added, and it’s certainly faster than driving and parking, though he admits it took him a while to get used to cycling with two instruments on his back.

Bass player Bergen Moore uses different wheels to get to the show: a hand-made, hand-painted skateboard. That has been his preferred mode of transportation for a while, even when he lived in hilly San Francisco. Now, he’s got his instrument affixed with wheels, too.

To get a bit of speed as he rolls his bass through the streets, he grabs onto one of his band mates’ bicycles.

The worst problems Moore has faced while wending through the streets all involve falls, he said.

Once, he even started playing a show when a friend pointed out he had blood on his sleeve from a tumble. Another time he ran over a plastic toy and fell, dropping his instrument on a car, which cracked the fret board on his bass. He managed to go home, glue it back on and still make it to the show on time.

Nary a pothole, nor the occasional motorist agitated at their speed, daunts these musicians. For a gig that was ten miles away, they made their way via a combo of human-powered transit and the Los Angeles Metro system.

They do enjoy playing the tavern around the corner.

Then, they get to indulge in an even simpler commute: walking.