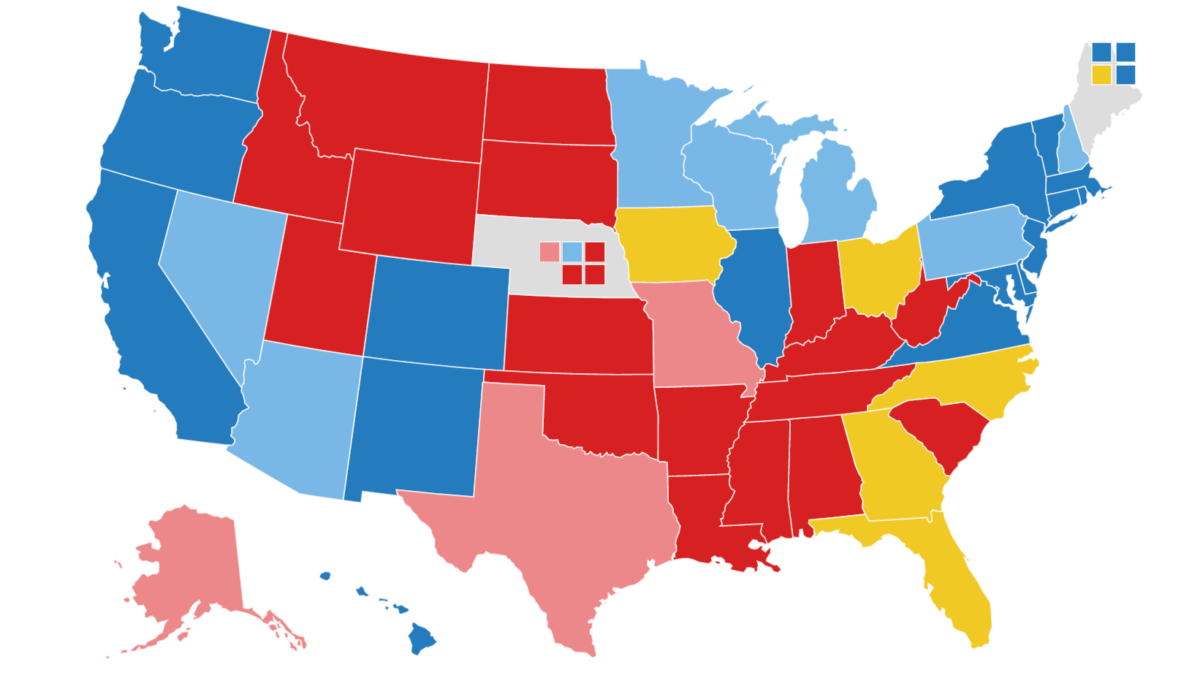 It’s been a rough couple of weeks for President Trump.

His performance in the first presidential debate was widely panned; Trump and several members of his inner circle contracted COVID-19; and then the president said he was pulling out of the next debate, after the debate commission said it wanted the candidates to appear from remote locations, citing safety concerns in the wake of Trump’s diagnosis.

That has left the fate of the remaining debates in doubt, as the campaigns and commission scramble to figure out how to proceed.

Given all of that, President Trump’s standing in the NPR electoral map analysis has gotten worse. With states that are determined to be likely to go for either candidate or leaning toward them, Democrat Joe Biden now leads Trump, 290-163.

Here are the moves we’ve made in this month’s map:

That puts Biden — right now — above the 270 electoral vote threshold needed to win a majority of the 538 available, leaving Trump with an uphill climb to win reelection. It comes with less than a month to go in the election — and with millions of votes already cast.

To put Biden’s lead in context, even if Trump wins all the remaining toss up states, it would not be enough for him to win. The president would need to make gains in the next three weeks in states now leaning toward Biden. Of course, Trump was able to do so against Hillary Clinton in 2016, particularly in the Upper Midwest.

We will update our map in a couple of weeks before the election – and things very well may shift and tighten between now and then, as they did in 2016.

Fueling Biden’s lead, according to national and statewide surveys, continues to be the former vice president’s overperformance with white voters, suburban voters, independents and seniors, all groups Trump won in 2016.

Biden is showing strength in the Midwest and is also eating into Trump’s margins in traditionally red states. Biden is unlikely to win places like Alaska, Missouri, Montana and South Carolina, but being more competitive there than Hillary Clinton was in 2016 is putting him on track to surpass Clinton’s vote total and popular vote margin of 3 million more than Trump.

It should be noted, however, that Trump remains within striking distance, especially in the Sun Belt states.

What’s more, Democrats are worried about mail-in voting, not because of fraud, but because of the high rate of disqualification of mail-in ballots due to technicalities like not signing in the correct place. Democratic voters are saying by far greater margins than Republicans that they’re more likely to vote by mail, rather than in person, because of the coronavirus pandemic.

Below is a deeper look at what we’ve changed and didn’t and why.

Toss Up to Lean D

Wisconsin: Polls have shown a consistent bent toward Biden this cycle. We had been reluctant to move it to Lean D, given Wisconsin’s high percentage of whites without a college degree, a strongly pro-Trump group. But Biden’s lead has remained consistent, up by 7 points now on average and above 50%.

Arizona: This is a closer race than Wisconsin with Biden up 4 points on average. It’s just on the edge of remaining in the Toss Up category, but here are a couple of points for why we moved it: (1) Trump hasn’t led here since early March and (2) when you look inside the polls, Biden is consistently doing better than Clinton did in Maricopa County, where two-thirds of the state’s vote comes from, and he’s even ahead of Clinton’s margins in Pima County, the traditionally Democratic area where Tucson is. What’s more, Democratic Senate candidate Mark Kelly has a wider lead in his race against incumbent GOP Sen. Martha McSally, which could help Biden’s chances as well.

Nebraska-2: Despite its Republican lean and the Democrat in the district’s U.S. House race polling close or behind the GOP incumbent, this Omaha-area district has continued to favor Biden.

Lean R to Toss up

Iowa: This is a state that should favor Trump given he won it last time and its significant white, non-college educated population. But polls have shown it neck and neck, with Biden ahead in some recent surveys.

Nebraska-1: This district borders the 2nd Congressional District, encompassing the college town of Lincoln and some Omaha suburbs. It should be a district that goes to Trump easily, but polls have shown the race within 5 points there.

Missouri: This used to be a traditional battleground state but has has fallen off in the last two election cycles. In 2008, Republican John McCain beat Barack Obama there by just 3,700 votes out of almost 3 million. The key here is if Biden continues to overperform with whites. That will make margins tighter in red states and in red counties in swing states.

Alaska: The tightening margins in these kinds of places are signs of a potential wave. We’ll see if that holds over the next few weeks, but right now, Biden is closer in the polling average in Alaska than Trump is in Pennsylvania, Michigan, Wisconsin or Nevada. Trump’s got his work cut out for him.

What we didn’t move, but are watching closely

Texas: While the polls show a race within the margin of error, Trump has been near or above 50% and leading in the polling average. The Biden campaign is looking to make things interesting, spending $6 million on ads in the state. So let’s see if they move the numbers and where things are in a couple weeks. But given Texas’ voting history and the GOP’s statewide political power, this one still leans toward Trump for now.

South Carolina, Kansas, Montana: All of these are traditionally red states that Trump won by significant double-digit margins in 2016. But each of them is within 10 points in the race between Trump and Biden, according to the polls. All of that points to a rising sea level for Biden. Does it stay that way?

Florida, Georgia, North Carolina, Ohio: These all remain Toss Ups. The southeastern Sun Belt states were expected to be very competitive, but Ohio was thought to be trending steadily Republican. That tells you a lot about the landscape and Trump’s struggles in the Midwest.

Florida, at one point this summer, looked like it was leaning toward Biden, but there is almost no path to reelection for Trump without Florida. So his campaign doubled down there and the race tightened, though a couple of polls this week have shown Biden opening up a lead again.

To read more about our methodology, as well as several scenarios for potential paths to 270 for each candidate, click here.