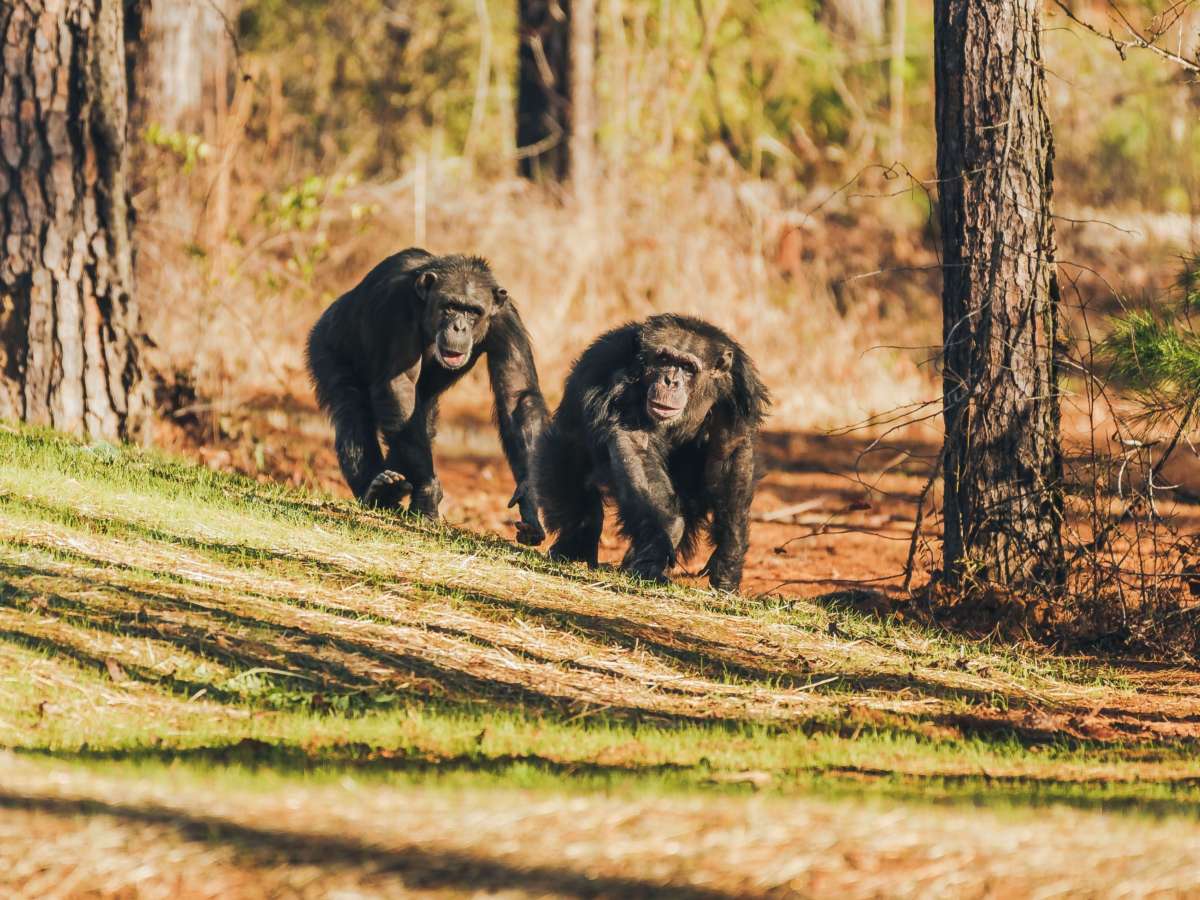 Two chimpanzees roam the grounds of Chimp Haven in Louisiana. Many former research chimpanzees have been sent to retire at the sanctuary.

For two chimpanzees named Huey and Pancake, both in their mid-30s, this week has been unexpectedly dramatic.

Huey, a male, and Pancake, a female, have been devoted to each other for over two decades. Together, they got loaded onto a truck at a research facility in Texas, where they’ve lived since they were young. They traveled for hours to a place in Louisiana where the hoots of hundreds of chimpanzees echo over pine trees.

The two chimps are now hanging out in a building that serves as the welcome center for Chimp Haven, the largest chimpanzee sanctuary in the world and the official retirement home for research chimps owned or supported by the federal government.

A co-founder of Chimp Haven, Amy Fultz, actually knew Huey and Pancake back in the 1990’s, when she was working at that Texas research facility and dreaming of someday creating a sanctuary for retired research chimps.

“I think we’ve all aged, obviously, in different ways. Both Pancake and I have put on a little bit of weight,” Fultz says with a laugh. “Huey is way more devoted to Pancake than I recall, very attached to her. But that makes sense after twenty years of them being together…It’s kind of full circle, for me, to have Huey and Pancake to be the chimps that are coming now.”

Which chimps get to go to sanctuary?

Huey and Pancake’s arrival at Chimp Haven means that the government has entered a new phase in its ongoing effort to retire its former research chimps. Now all of the federally-managed chimps that have been deemed eligible to go to this sanctuary have actually been sent there.

The vast majority of the 85 or so government-supported chimps remaining at research facilities have chronic, progressive health problems like heart disease or diabetes that make the animals too fragile and ill to ever move, say officials at the National Institutes of Health.

Nine of these remaining chimps are probably healthy enough to relocate to Chimp Haven, but they’re currently ineligible to go because each is part of a socially-bonded pair with another, sicker chimp. When the sicker chimps die, however, their companions will be reassessed and may make the move.

That’s why the process of sending chimps to the sanctuary is “largely finished” but “there’s still that group that’s in a tight social bond that will be reconsidered when we can,” says James Anderson, the NIH’s deputy director for program coordination, planning, and strategic initiatives. “There is a group of animals that we want to move and we’ll do it when the social circumstances change and we can consider it.”

Some animal welfare advocates, however, question how NIH officials and veterinarians have been making these decisions. They say even more chimps should get the chance to live the rest of their lives at a sanctuary.

“If you look at the medical summaries for some of the chimps, a lot of them will say, ‘Well, we’re concerned that there’ll be a sudden heart attack if the chimps are moved,'” says Kathleen Conlee, vice president of animal research issues at the Humane Society of the United States. “Chimpanzees are notorious for cardiac problems anyway. You could be a completely healthy chimpanzee at 16 years old and die from a heart attack, quite frankly. So to us, that’s not a reason to keep them sitting in the labs.”

Her group and others have sued the NIH over the fate of 35 chimps that the agency says need to stay at the Alamogordo Primate Facility in New Mexico.

Even a relatively old chimp could continue to live for years; the three oldest chimps at Chimp Haven are all 61 years old and are believed to have been captured in the wild in the 1960’s. One of them was in her 50’s when she moved from a research facility to the sanctuary.

The NIH has been working to retire all of its hundreds of research chimps since 2015, when it announced that it was ending invasive biomedical research on this species. That move came after the agency had already been reducing this type of research with chimps, which are close biological relatives to humans.

“Their likeness to humans has made them uniquely valuable for certain types of research, but also demands greater justification for their use,” said Francis Collins back then, when he was the NIH director.

The effort to move former research chimps to the sanctuary quickly became complicated by the fact that many aging chimps have diseases that could be exacerbated by stressful life changes.

“The transfer process can be quite dangerous,” says Anderson, who notes that it doesn’t just involve the physical stress of the trip on a truck but also social adjustments to a new community. “And that can go on for months after arriving at the sanctuary.”

The agency developed a standard way of assessing the health of chimps, which included a review by NIH veterinarians whenever a research facility determined that a chimp was too fragile to move. “And we use that as the final decision for whether it’s safe or not,” says Anderson.

Since 2017, an average of 36 NIH chimps a year have been transferred to Chimp Haven, according to Fultz.

A new life in Louisiana

There, 330 chimps live on a 200-acre property that includes natural, wooded areas surrounded by moats. A staff of more than 50 employees does nothing but care for the chimps and enrich their lives.

“Chimpanzees in the wild live in groups of 20 to over 100 chimpanzees. Our average group size right now at Chimp Haven is 11. So we do work towards integrating the chimpanzees into those larger groups,” says Fultz.

Sometimes chimps know each other already; Huey and Pancake know some chimps at the sanctuary, and Huey even has a son who has been living there.

But all of this social planning takes a lot of thought and a large amount of coordination between Chimp Haven and the sending facility.

Primate research facilities generally house chimps in smaller social groups. Their chimps can live in fairly large enclosures with access to the outdoors and climbing equipment. In many cases, care providers at research institutions have known the chimps for years if not decades, and they can become quite attached.

Asked how many NIH chimps are expected to come to the sanctuary in the next couple of years, Fultz says: “That’s an NIH decision. They make those decisions about who is eligible to come. We’ll await their decisions in the future.”

Conlee believes that the government has a legal obligation, under a 2000 law passed as the CHIMP Act, to retire chimps to the federal sanctuary and not leave them at research facilities; that is one of the issues being litigated.

“I’m not saying the caretakers don’t care about those chimpanzees, I feel like they really do,” says Conlee. “Chimp Haven just has the expertise to provide that higher level of welfare. And, in addition to the welfare of the chimps, is the cost.”

The cost for the NIH to support a chimp’s care at Chimp Haven is significantly cheaper than at research facilities, Conlee points out, as the sanctuary is required to raise some of its own funds. The average cost to the NIH is around $26 per animal per day at the sanctuary, compared to around $97 or $124 per day at a research facility.

While the chimps managed by the NIH make up a significant fraction of the chimps in the United States, one census recently found over 1,300 or so chimps living here, not just in sanctuaries and zoos but also in research facilities beyond the ones that take care of NIH chimps.

The Yerkes National Primate Research Center in Georgia, for example, currently has 30 chimps, none of which are NIH-managed. All live in social groups and are not involved in any research studies, according to spokesperson Lisa Newbern. While the center does evaluate opportunities to donate chimps to zoos or other appropriate places, Newbern said, they also have “a limited number of animals our veterinarians have determined are likely unsuitable for donation.”