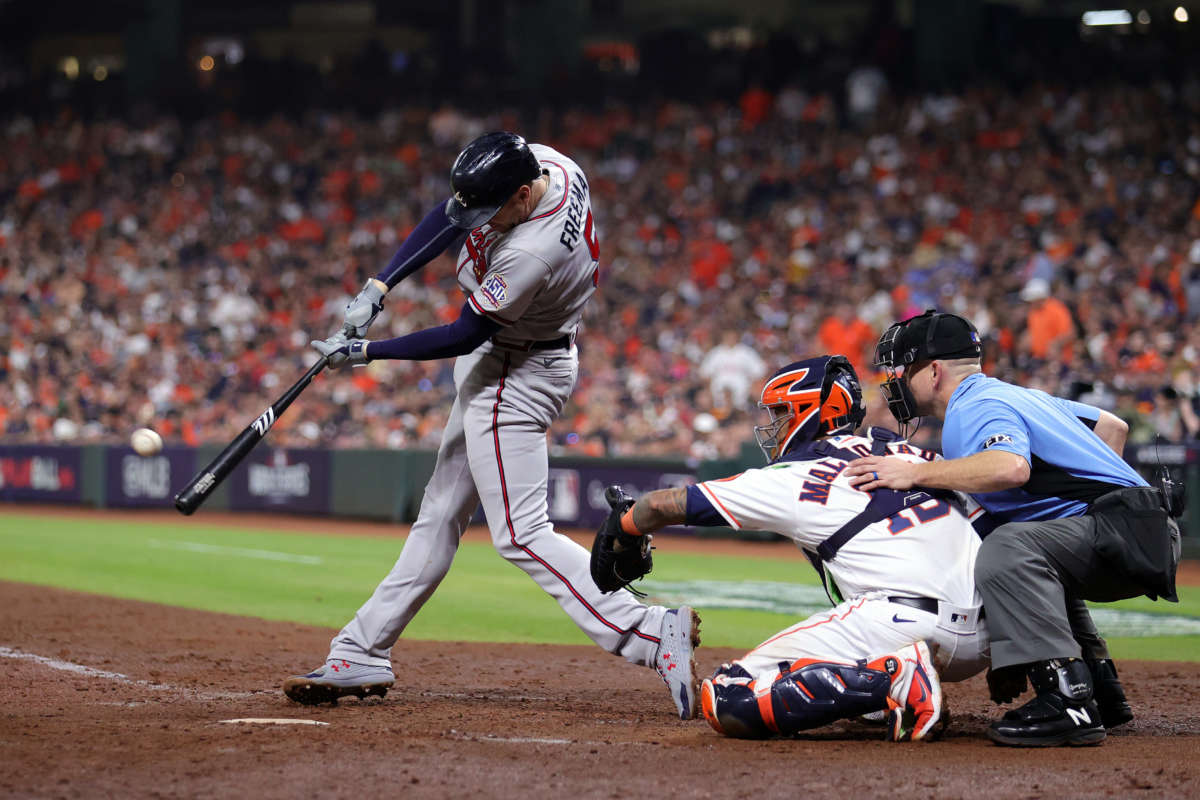 Freddie Freeman of the Atlanta Braves hits a home run against the Houston Astros during game six of the 2021 World Series. A report by Business Insider found that the league used two different types of baseballs during the 2021 season, one of which flew further.
Image credit: Carmen Mandato

As Major League Baseball’s players and owners begin in the league’s first work stoppage since the mid-1990s, a new published report has accused the league of secretly using two different baseballs during the 2021 season, potentially affecting players’ performance and game outcomes.

The current collective bargaining agreement between players and owners expired Wednesday at 11:59 p.m. ET. The two sides are not close to an agreement, according to reports.

Without an extension of the current contract, team owners triggered a lockout, the owners’ version of a strike.

It’s the league’s first work stoppage since the dramatic strike of the mid-1990s that led to the cancellation of the 1994 World Series.

Because baseball is in its offseason, a lockout’s effects would be limited to offseason roster transactions, like free agency signings, and minor player actions like physicals. The two sides have more than two months to reach a deal before a lockout would affect spring training, which is slated to begin in February.

Among the heated issues are player pay and competitive balance. Average salaries have fallen in recent years due to teams leaning on cheaper, younger players whose salaries are under greater team control. The median salary has dropped about 30% since 2015, according to the Associated Press.

Now, a wrench has been thrown into the conversation: A new report by Business Insider accuses the league of using two different baseballs throughout the 2021 season — without the knowledge of players or teams.

The report draws on research by Meredith Wills, an astrophysicist and data scientist who in recent years has conducted her own independent studies of baseballs used in major league games.

In a statement, the league acknowledged that it had used two different balls and blamed differences on production difficulties caused by the pandemic.

“Generally, balls are produced 6-12 months prior to being used in a game. Because Rawlings was forced to reduce capacity at its manufacturing facility due to the COVID-19 pandemic, the supply of re-centered baseballs was not sufficient to cover the entirety of the 2021 season. To address this issue, Rawlings incorporated excess inventory into its shipments to Clubs to provide a full complement of baseballs for the 2021 season,” the statement said, adding that the players’ union had been informed of the decision.

The MLB has co-owned Rawlings, the company that manufactures its baseballs, since 2018.

A change in baseballs can undermine statistics

Ahead of the 2021 season, the league announced it would introduce a new baseball: one with a lighter, less bouncy construction designed to cut down on the number of home runs.

But in sampling hundreds of baseballs collected from 15 stadiums, Wills found that roughly half of the balls used this season conformed with the old standards, meaning they were heavier and could be hit further.

And the balls’ batch numbers indicated that some of the older, heavier model had been manufactured after the league’s announcement that it would move to a lighter ball — including every ball that had been produced after January 2021. That finding seemingly contradicts the league’s suggestion that any discrepancies were due to excess supply from 2020. An MLB spokesperson declined to comment further.

In a league where statistics inform practically every decision made by teams — who plays, who gets signed, how much players are able to earn — the revelation that the league had used two different balls, one of which flies further, prompted frustration among the players contacted by Business Insider.

“Everything in this game is based on your statistics,” said Adam Ottavino, a free agent who last pitched with the Boston Red Sox. “There’s a million of them. If the variables are being changed out from underneath you and in an unfair way, that sheds doubt on every statistic that you have.”

Baseball construction has been hotly debated in the sport in recent years, as home runs totals began to spike. After players hit a record 6105 home runs in 2017, the MLB commissioned a group of academics to help investigate why.

Accusations that the league was “juicing” baseballs picked up steam in 2019, when players hit an eye-popping 6,776 home runs — an 11% increase over the record set just two years before.

Practically every star pitcher, including Justin Verlander, who then pitched for the Houston Astros, and Jacob deGrom of the New York Mets, voiced suspicions or questions that season.

“With the ball changing as much as it has over the past handful of years, the players have had no say in that whatsoever,” said then-Washington Nationals ace Max Scherzer, speaking to The New York Times in 2019. “We’re left, as players, wondering why the ball can change that much, that fast, and have that big of a result.”