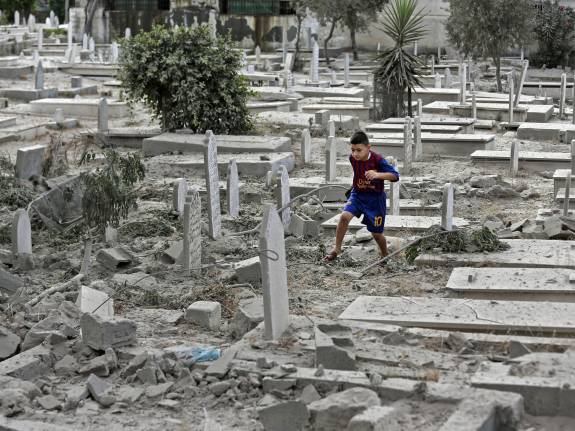 A Palestinian boy runs on rubble of damaged graves at a cemetery hit by an Israeli strike in Gaza City, on Sunday.
Image credit: Lefteris Pitarakis

Israeli Prime Minister Benjamin Netanyahu says he’s prepared for a protracted military operation in Gaza and has ruled out returning to truce talks in Cairo as long as Hamas rocket attacks continue.

Netanyahu’s remarks come amid reports from The Associated Press, citing unnamed officials, that the Palestinians have agreed to a new 72-hour cease-fire. A Hamas representative at the Cairo talks later said the cease-fire proposal was being “studied.” Even so, with no reciprocal agreement from Israel, the offer appears to be moot.

NPR’s Jackie Northam, reporting from Jerusalem, says Netanyahu spoke at the beginning of a Cabinet meeting focused on the war in the Gaza Strip.

He said at no stage did Israel declare that its military offensive against Hamas in the Gaza Strip was over, and that it will continue until there is what he calls a prolonged period of quiet.

“Many hoped that could be achieved through peace negotiations in Cairo. But Israel walked away from the indirect talks shortly after the 3-day ceasefire collapsed, saying it would not negotiate under fire.

“The Palestinian negotiation team has remained, but it is now threatening to leave Cairo if the Israelis don’t return. In the meantime, the fighting continues. Israel says Hamas has launched more than 100 rockets from Gaza to southern Israel over the weekend. The Israeli military says it’s launched some 120 airstrikes.”

Reuters, citing medics, says “Israeli airstrikes and shelling have three Palestinians in Gaza on Sunday, including a boy of 14 and a woman in a third day of renewed fighting that has jeopardized international efforts to end a more-than-month-old conflict.”