Missing Your Loved Ones Over The Holidays? International Students Offer A Few Lessons 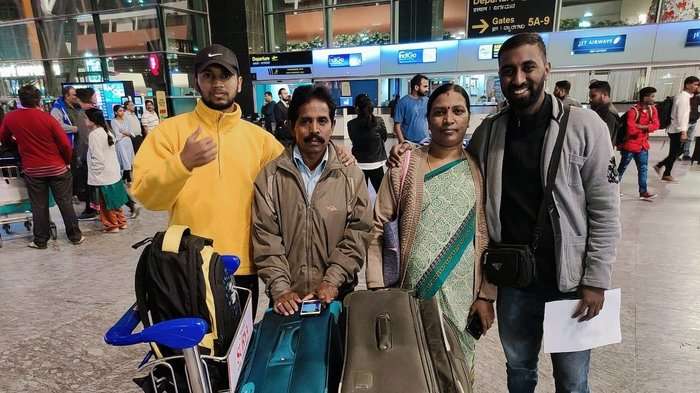 Girish Venkatesh with his family before he left India to study in Arizona. He is among the roughly 1 million international students at U.S. colleges and universities.

The U.S. is nine months into the pandemic — and for some people, it’s the first time they’ve gone without seeing their loved ones for months on end.

Even with a vaccine rolling out, many families won’t be able to gather for the holidays.

That separation is something the more than 1 million international students studying in the U.S. this year are familiar with. If it was hard before for them to get home for visits, the coronavirus pandemic has made it even more difficult.

To help cope with being away from home, they’ve created new support networks, immersed themselves in American culture and developed other techniques to help lessen the burden.

Katayoon Beshkardana, 38, hasn’t seen her family in five years, after leaving Iran to study in the U.S. She’s currently pursuing a Ph.D. at American University Washington College of Law in Washington, D.C.

Beshkardana’s immediate family — her mom and older brother — live in Iran. Her father died when she was 13.

She suffered another terrible loss about two years ago, while she was in the U.S.

“I lost my very, very young brother, who was only 44 years old,” says Beshkardana.

“It has been super hard for me, but I’m very thankful for the new technology, because FaceTiming and being able to video call now, at least it has brought a little bit more intimacy,” Beshkardana says.

Living away from family isn’t a new experience for Beshkardana, who studied abroad in Europe in 2007. The difference is that for now, the pandemic means going home for a visit isn’t possible.

Despite these hardships, Beshkardana says that choosing to study abroad has always been worth it for her.

“Coming out of the country for me was more like an adventure, I’ve never been scared,” she says.

It also helps that everywhere she’s lived, Beshkardana has been able to build a strong network of friends.

Since she’s been in D.C., Beshkardana says she’s connected with the area’s sizable Persian community and usually gathers with them this time of year to celebrate.

Even though Thanksgiving and Christmas aren’t celebrated in Iran, Beshkardana says that American holidays have become part of her personal culture.

This Christmas, she’ll be focusing most of her energy on writing her dissertation, which is due before the end of the year. But she’ll be making time to bake gingerbread and exchange gifts with some friends and their families.

“I have friends who have kids and it’s just amazing when you see them in the morning coming down and opening gifts,” she says. “It’s just such a joy.”

Beshkardana says that being able to lean on the community she’s built during the past five years helps her feel like she has her own “family” in the U.S.

But she knows that’s not the case for many international students.

“Especially with the pandemic, they didn’t even find a chance to build up their networks so that they have good friends,” she says.

Starting Over, And Over

That was the case for Girish Venkatesh, who had to start building his community from scratch this year.

Originally, he came to America from India five years ago on a 10-month exchange program at Mesa Community College in Arizona. Venkatesh, 26, quickly found a mentor in his host father, William Johnson.

This year, when Venkatesh came back to Mesa to study exercise science, his former host father offered him a place to stay again.

But in early March, Johnson had a heart attack and passed away.

“That was really heartbreaking for me because I didn’t have anyone [else] like [Johnson] over here,” Venkatesh says. “Once he passed away, I was lost. I didn’t know what to do.”

Girish Venkatesh (shown here in Las Vegas with his then-host father, William Johnson) has come to the U.S. from India twice to study. The second time, he was struck with unexpected losses: Johnson died and he had to find a new host family, and the pandemic meant he shifted to online learning.
Girish Venkatesh

Venkatesh found himself juggling the stresses of dealing with the death of his host father, switching to online classes abruptly in the spring, and being away from his family.

He says he tries to not put too much pressure on himself right now. He goes to the gym and works out, plays soccer and dances to Bollywood music.

He also spends time with the friends he has made in Arizona through his school’s exchange program. Some of them gathered in early November to celebrate Diwali, the festival of lights that is one of Hinduism’s most important holidays.

Diwali symbolizes new beginnings and the victory of good over evil, and light over darkness.

“There’s always a darkness, but there is always a light in everyone’s life that helps to cover the darkness,” he says.

And things have started to look a little brighter for Venkatesh, who now has a new host father.

“He said, don’t worry, we’re going to set up a Christmas tree in the house, and you can decorate it,” Venkatesh says. “So I’m very happy.” He also jokes that he believes in Santa Claus.

That won’t be the case for research students like Sunit Girdhar, who will still be in the lab at Michigan Tech University where he studies noise and vibration.

This time last year, the 25-year-old was back home in India with his mom, dad and older sister. That’s when he found out his sister was pregnant, so he made plans to go back in August of this year to visit them.

Then the pandemic came.

“That was the biggest blow,” Gihdar says. “That’s a big moment in the lives of my family and I was not there to witness it.”

Though FaceTiming his family and new niece isn’t the same, it is something.

Sunit Girdhar (2nd from right) at his sister’s wedding in India in 2019.
Sunit Gihdar

Gihdar hasn’t lived with his family for almost 11 years, he moved out of his parents home in 2009. He was still living in India, but in a different state.

Gihdar says that despite being independent for more than a decade, he was still nervous to come to the U.S. in 2017.

“It was a big plunge. The biggest thing was, well, there’s no going back now, you know what I mean?” he says. “This is making a big decision that is going to make a big change in my career, and it’s not going to be easy to go back.”

Girdhar with his girlfriend. He is a graduate student at Michigan Technological University in Houghton, Mich.
Sunit Gihdar

Once he was in the U.S., schoolwork — plus trying to make new friends — distracted him from his anxieties. Gihdar also met his girlfriend when he moved to Michigan, and they now live together. They’re hoping to spend Christmas with her family in Milwaukee.

There’s no telling when Gihdar will be able to see his own family and his new niece. And yet, he says, this pandemic has actually brought him closer to his family, despite being separated by more than 7,000 miles.

Pre-pandemic, Gihdar was focused on his research and working part-time so he didn’t have as much time to talk with his family. Now, the pandemic has allowed him to slow down and carve out time to connect with them.

“My dad has really been a rock because he’s like, you can just either be sad about it or you can just take one day at a time and see what happens.”