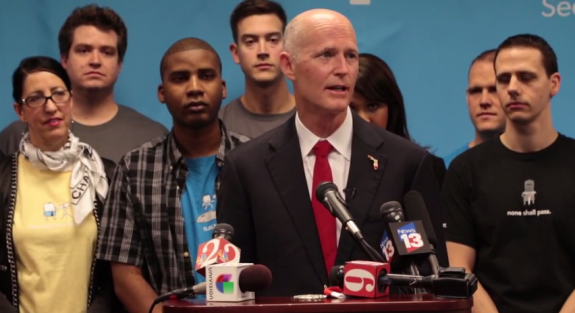 Governor Rick Scott was in Central Florida Friday to unveil the state’s latest jobless report and visit a business planning to hire hundreds of workers in the coming year. The new numbers show a drop in Florida’s unemployment rate, with the Orlando metro area leading the state in job expansion.

Scott made the announcement at a Maitland-based financial tech services firm called Viewpost, a company set to expand and hire 300 new employees. The location underscored the importance of Central Florida’s position in the latest report – 46,000 jobs were added here over the last year, more than any other metro area in the state.

The Orlando area’s jobless rate was 5.3 percent in November. That’s lower than the statewide rate of 5.8 percent.

The state’s unemployment number dropped by .2 percent from October, bringing it even with the national rate.

Florida trailed only California in the number of jobs added in November.