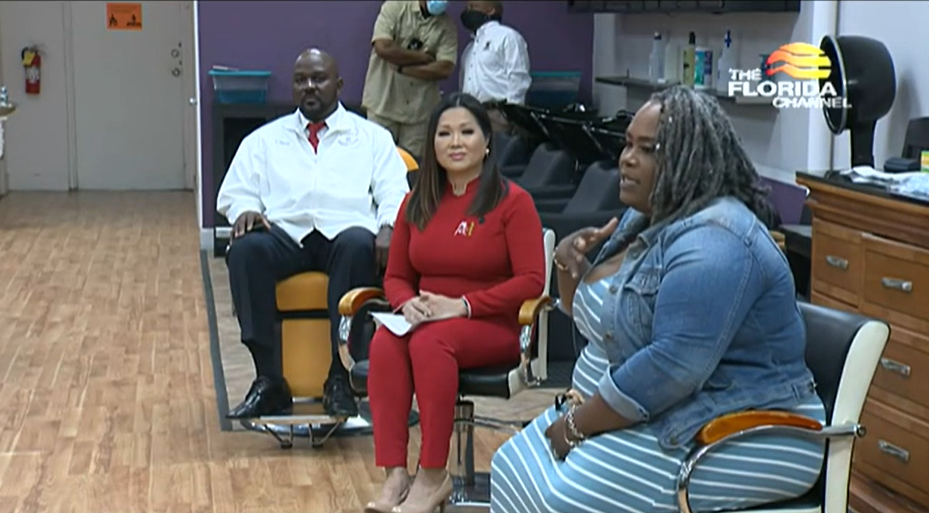 Gov. Ron DeSantis says he “wants to get to yes” on reopening barbershops and cosmetology salons.

DeSantis met with Orange County Mayor Jerry Demings, county health leaders and a group of salon and barbershop owners in Orlando Saturday for a roundtable discussion.

Demings sent the governor a letter Friday asking to discuss the issue after the Orange County task force recommended reopening salons and barbershops, which were not included in the list of businesses allowed to reopen May 4th under the state of Florida’s guidelines for the first phase.

“We were trying to just do things in a way that’s safe, smart, step by step,” said DeSantis after the round table at Oh So Jazzy salon.

“This is something my task force had been discussing. We did not roll it out in phase one, but that does not mean we’re not intent on on getting the yes on this.”

Salons and barbershops are “the main arteries” of many communities

Mayor Jerry Demings said owners of hair salons and barber shops have told him and members of the county’s economic task force that if they’re allowed to reopen they will do so in a way that’s consistent with the safety guidelines outlined by the Governor.

“This issue regarding the reopening of hair salons, nail salons and barbershops is one that we mutually have said that we believe is the right fit for our community,” said Demings.

“And for me, the guiding principle really is to ensure safety first, and then the economic recovery next and there’s a happy balance between the two that we are trying to attempt to measure up to.”

The owner of ‘Oh So Jazzy’ told Gov. DeSantis that businesses like hers should be considered essential.

“Truthfully, hair salons and barbershops, those are the main arteries of a lot of our communities. And once you cut that you can bleed out financially and that’s not okay for us,” she said.

DeSantis returned to a theme from last week’s press conference announcing the phased reopening, when he criticized “talking heads” in the media.

“There’ll be people that are like talking heads on TV that’ll say, you can’t open everything up and yet they’ve been doing this for six weeks and their hair always looks good. How does that magically happen?” said DeSantis.

“I mean, I haven’t had a haircut in two months, not that that’s the important thing, but I mean I’m coming on like a mullet almost with how much my hair is grown,” he said.

“I think part of the reason we’re able to have the discussion is because we’ve seen a great amount of success throughout the state, but particularly here in Orange County, and I think the county health department, I think the mayor, I think all the folks who’ve been involved with that deserve a lot of credit,” said DeSantis.

DeSantis touted Orange County’s success in flattening the coronavirus curve as evidence the state is on the right track in battling the spread of the disease, noting that there were 581 patients statewide in ICU beds friday night, the lowest that number has been in a month, with just 21 of those patients in Orange County.

“There’s no way you can have a pathogen circulating anywhere and and not end up in Central Florida with the tourism with the number of people in our country that come here from various states,” said DeSantis.

He said the state has tested about 420,000 people so far, and is rolling out more testing yet, including “a mobile lab in a converted RV” that he said could be deployed to places like nursing homes.

So called ‘strike teams’ of Florida National Guard personnel have been testing staff and patients in long term care facilities, with about 12,000 people tested so far, said DeSantis.