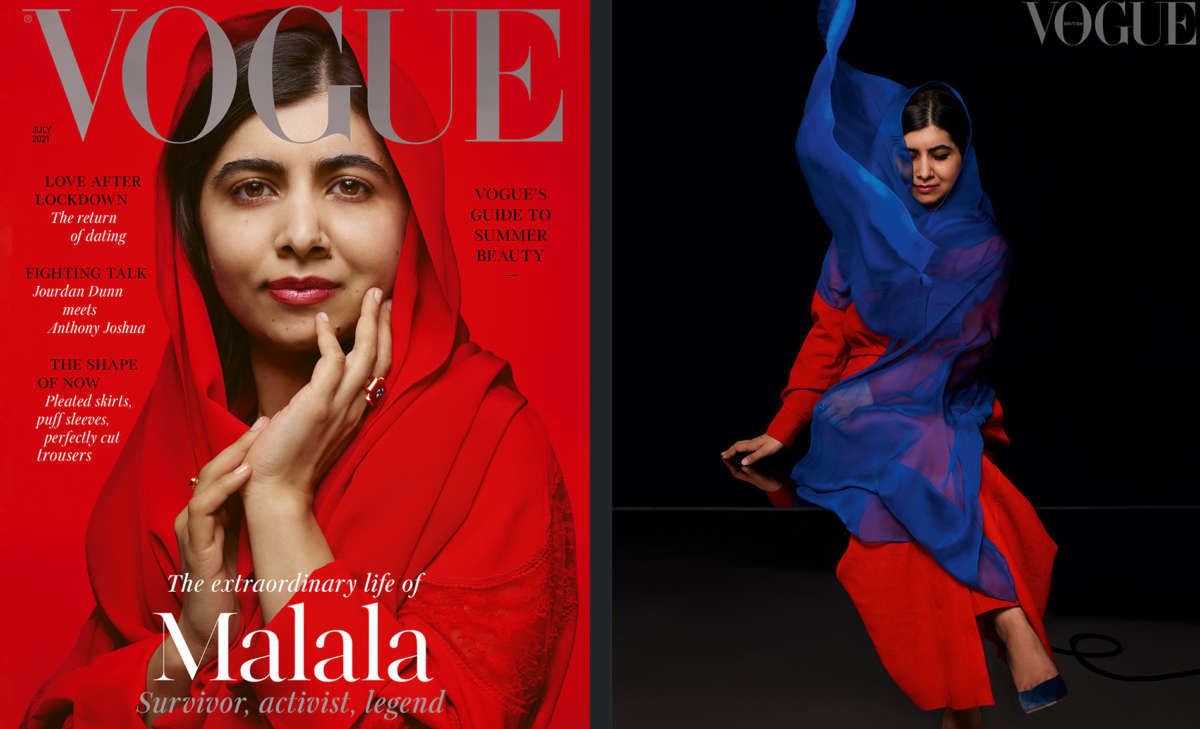 Malala Yousafzai is the subject of the cover story in the new issue of British Vogue. A comment she made about marriage has prompted social media outrage in Pakistan.

In Malala Yousafzai’s 23 years, she’s won the Nobel peace prize. She runs a global girls’ education charity. She graduated from Oxford. She’s known by only one name, like Obama. This month, she was a guest star on the Friends reunion. This week, she made the cover of British Vogue.

The headline: “I Know The Power A Young Girl Carries In Her Heart: The Extraordinary Life Of Malala.”

But as much as Malala Yousafzai is beloved in the West, she is hated in her native Pakistan. As a 15-year-old, she was airlifted out of the country in 2012 for medical treatment after a Taliban insurgent shot her in the face for her advocacy of girls’ education. In her homeland today, she’s divisive. For a liberal minority, she’s a feminist icon and hero for her global activism on behalf of girls. Others see her as a Western stooge.

So this week, many Pakistanis on social media reacted with white-knuckled anger after she told Vogue: “I still don’t understand why people have to get married.”

“If you want to have a person in your life, why do you have to sign marriage papers, why can’t it just be a partnership?” she says in the chatty tail end of the article, which covers a range of topics, from how she coped with graduating from Oxford during a pandemic to her desire to eventually move out of home (she still lives with her parents in Birmingham, England).

The interviewer writes, “Her mother – like most mothers – disagrees. “My mum is like,” Malala laughs, ” ‘Don’t you dare say anything like that! You have to get married, marriage is beautiful.’ ”

And even though in the interview she also stated that she hangs out in pubs with friends and that wearing a headscarf is cultural, it was the marriage comments that brought the backlash.

One Twitter user said he was mad that the Taliban hadn’t killed her before her statement about marriage caused shame to Pakistan.

The insurgents “could not hit a single perfect target,” wrote Muhammad Arif Shahzad, referring to Yousafzai’s face, underneath a post by Yousafzai herself about the Vogue piece.

“The whole nation is going through shame for the punishment,” wrote Shahzad, of the Taliban not making a “perfect” hit.

​Shahzad sent a tweet to NPR in response to a request to clarify his thoughts: “I am embarrassed that Malala is saying that open relationship is better than marriage. I am ashamed because [s]he is Pakistani and Muslim. I am angry with the Taliban that they did not hit properly. He has shot [sic] Malala in the brain so she is talking nonsense.”

Pakistan is overwhelmingly conservative, and most men and women are matched up in some form of arranged marriage. Civil partnerships [without an Islamic marriage contract] are unheard of outside a tiny crust of elites and are is widely seen as lewd.

Yousafzai’s father, Ziauddin told NPR that his daughter’s words had been twisted by “trolls.” “Social media misinterpreted what she said, taking out selective things out of context changing it and interpreting it,” he wrote in a Twitter message in response to a request for comment.

But Pakistan is not a place that welcomes a casual thought about the need for marriage, particularly not from Malala Yousafzai. Responses on social media ranged from panic that she was poisoning Pakistani youth against Islam to gang rape threats.

“This accursed woman with a slanted face is ridiculing the way of my prophet,” wrote Twitter user, Ahmed Saeed Khan Dawar in Urdu. Yousafzai’s face is somewhat asymmetrical, because of the bullet that struck her. (Vogue notes that she and her family call that attempted murder “the incident.”)

“Marriage is a Sunnah,” Dawar wrote, referring to the practice of the Prophet Mohammad which all Muslims are expected to emulate. “Partnership is adultery.”

“They are interpreting her remarks not as hypothetical questioning but an actual denigration of our religious values and mores, if not an outright declaration that she’s advocating people should ‘live in sin,’ ” says Bina Shah, a Pakistani author and columnist who has written about the country’s fraught relationship with Yousafzai. “They’re taking it as ‘aha!’ proof that Malala is not truly sincere, not truly modest, not truly a good Pakistani or Muslim.”

From public sites like Twitter to newspaper comments – to groups for middle-class Pakistani soccer moms — the outrage was palpable.

One woman, who identified herself on Twitter as an adviser to a politician in Pakistan’s ruling coalition, accused Yousafzai of being groomed by multiple intelligence agencies to lead Pakistan. “It means the training abroad by M16, CIA & many others is complete,” alleged Misba Zafar, “and she is ready to be launched as PM of Pakistan.”

There was also social media support for Yousafzai.

“Extremely graceful. Keep blooming … We are proud of you,” one Twitter user wrote.

Another tweet sang her praises: “Looks beautiful! I never understood the hatred among Pakistanis against Malala. She is a Pakistani hero in the west & reminds the world that Pakistanis are humble, kind, resilient, compassionate, talented. Neither of the qualities exist in ppl who don’t like her, lol.”

But on social media at least, those voices appeared to be a minority, avalanched under comments calling Malala unprintable names, questioning her sex life, accusing her of being a traitor and a woman who had renounced her faith.

The anger reflects a deep-rooted misogyny, says Nida Kirmani, a feminist sociologist. For years she has looked at responses to Malala and her work. Both women and men express vitriol toward her, but Kirmani believes that there are more men who speak out: “Many men are simply threatened by a vocal young woman and there is a jealousy that exists of a young woman who has made it so big internationally.”

But the resentment of Yousafzai also had an older aspect rooted in the region’s British colonial past, and more recently, of America’s intentions in the region. “This has led to a kind of blanket, and often misplaced, suspicion of anything ‘Western,’ ” Kirmani says.

“Malala is perceived as the darling of ‘the West,’ ” Kirmani notes. That “has also spurred a lot of conspiracy theories about her and the horrific violence she endured.”

Indeed, some of the more hateful posts seemed to veer between mocking her appearance because she had been shot to doubting that Yousafzai was ever shot in the first place.

One Twitter user referred to complaints that Yousafzai was tarnishing Pakistan’s image: “Malala is making Pakistan look bad” Yeah because it looked so great that a 15 year old kid was shot in the face for wanting an education.”

Another Twitter user responded: “She never got shot, it was a CIA drama!!”

And the hashtag #ShameOnMalala is still trending.