Listen in: Orange County Library System will celebrate Captain Charles L. Albertson this week, and the book donation that started it all 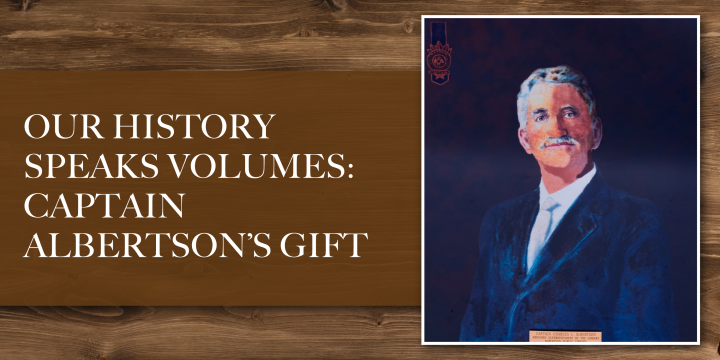 Orange County Library System is celebrating a big anniversary on Wednesday: 100 years since Captain Charles L. Albertson donated his book collection to the City of Orlando.

That collection of over 12,000 titles, ranging from nonfiction to histories and collections of poetry and essays, became the area’s first public library and a precursor to the Orlando Public Library.

WMFE spoke with OCLS’s Erin Sullivan about the history of the library in the community.

Y’all, we just saw #Dune! 🙌 If you liked the movie, then take a stab at reading the book by Frank Herbert. Order it here: https://t.co/k0S0sHf3DN pic.twitter.com/DU5zuAgJkp

Erin: Well, we owe the Orange County Library System to Captain Charles Albertson. He was a retired New York City police inspector who was from Waverly, New York. He spent his winters in Orlando beginning in about 1913. And in 1921, he recognized that Orlando did not have a dedicated library system that served the entire community. And he was an avid book collector. So, he approached the city with a proposal that he would donate 12,000 of his own personal books to found a library if the city would build a fireproof building to house it. So, the city thought this was a great idea. The city council voted in favor of the proposal. And that is how our library system got started.

Danielle: That is such an incredible story. I read that he donated over 12,000 books. Do you have a sense of what was in that original collection? And if any of it still exists in the library today in some form or other?

Erin: Yes, and yes, a lot of things were nonfiction. He was really interested in a wide array of subjects. So if you go through some of the original titles, you’ll find books about various Native American tribes and a lot of Native American history, you’ll find history of European countries like Ireland. I know there was one in particular that kept popping up that was just kind of a comprehensive history of Ireland, he had various works of great literature. I know Dante’s Inferno was one of the books, I think I saw a couple of other books of poetry in the collection. He was an interesting person, and he was very well read. And we do actually have some of the books right here in the building. We kept a, I’d say, in physical copy, you know, somewhere between 50 and 100 that are on display in what’s called the Albertson Room in the Orlando Public Library, there are these bookshelves that lined up the walls there, and all the books that are in those shelves are part of the original Albertson Collection. We also have some rarities on the fourth floor that are being kept. They’re not books that you can check out or really handle because they’re so old, and they would just fall apart. So we do our best to kind of keep them, you know, out of harm’s way. But we have digitized a variety of them online and you can go to our website and you can browse some of the original collection now for yourself digitally because that’s the safest way to view them.

Danielle: That is just so incredible. What are you guys doing to celebrate, you know, this anniversary? I heard part of it might involve some some local beer.

Erin: Yeah, indeed. We have partnered with Ivanhoe Park Brewing [Company], which is in Ivanhoe Village right here in Orlando. And they have brewed a special beer called Captain Albertson Ale. It’s brewed after the style of what was called a steam beer. It’s kind of a lager type beer. I don’t really know what it tastes like yet because we haven’t opened it because we are having an event on Wednesday at 5pm at the brewery. This is sort of the beginning of the library’s centennial celebration. So you know the Albertson Library does not stand anymore. The building was really not holding up to the amount of use it was getting. So now the Orlando Public Library’s what replaced that building. So you don’t really have a visual reminder. So it’s really important, I think, for us to use these other ways these celebrations to show people you know, how did how did this come about? How did this happen?