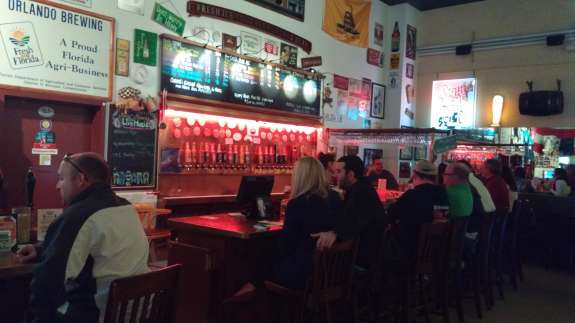 Orlando Brewing's taproom is home to 24 different brews and operates outside of Florida's three-tier system.

A 64-ounce glass container used to package craft beer is at the center of a debate in the Florida legislature. Florida is one of only three states to ban the container, called a growler.

Lawmakers are moving bills forward to end the ban, but legislation coming out of Tallahassee is more than just glass jugs – it could change the way craft breweries operate throughout the state.

Orlando Brewing President John Cheek pours himself a beer from one of two-dozen taps in his taproom. It’s a busy day and he grabs one of the last tables remaining to talk about the growler bill.

A 64-ounce glass container used to transport beer, called a growler, could soon be legal in Florida. Photo: By Sarah McD

If the law passes, his customers can fill and take with them a half-gallon of his beer to drink at home.

Growlers in Florida are drawing support from craft beer lovers, but Cheek doesn’t think he’ll make money off of it. “It’s neat that you have a half gallon, but you can fill up two quarts. I don’t get what everyone is trying to do with the silly ass half gallon,” said Cheek.

Look past the growlers in the state legislation and you find an even bigger issue – the right to sell beer onsite at brewery taprooms.

That’s more important to Cheek and his business this legislative session.

“The nut of what we do and what we are required to have on a monthly basis is generated by the taproom,” he said. In fact, since the brewery opened most of their business has come from the taproom. “I wouldn’t be in business if I didn’t have the taproom.”

Florida has a three-tier system when it comes to alcoholic beverages. Manufacturing, distribution, and retail.

But craft breweries like Cheek’s do manufacture and sell beer in taprooms. So how do they do it?

Breweries operate under a loop-hole called the “tourism exception”. Essentially, breweries can self-distribute inside their taprooms as long as they prove they are promoting tourism in the state.  “Realistically the only way I was able to get it was to show them I had a brochure from the Florida Brewer’s guild that said I gave free tours,” said Cheek.

Mitch Rubin, Executive Director of the Florida Beer Wholesalers Association, thinks brewers like Cheek have an unfair advantage in the beer market. “Breweries then become retail operations that are in direct competition with distributors and retailers in contravention with Florida’s three-tier system,” said Rubin.

Trying to regulate that unfair advantage, Florida Senator Kelli Stargel last year introduced a bill that would require brewers to sell their beer to a distributor who would then sell it back to the brewer  to be sold in their tap rooms.

That bill generated a heated debate between manufactures and disturbers and died in the legislature. “I think what had happened through the process is that there was a lot of distrust between the two different people in the fight because it was quite a fight,” she said.

In a lawsuit earlier this year, trade groups like the Florida Retail Federation argued that the law with the loophole is too vague and asked for a more narrow definition of “tourism”. Lawmakers are tackling that tourism exception loophole in bills in the Senate and House.

Sarasota Republican Representative Greg Stuebe sponsors a bill that does just that when licensing taprooms across the state. “The Senate’s language basically would allow unlimited manufacturing and retail vendor’s licenses to all of the craft breweries – unlimited,” he said about a similar companion bill in the Senate.

Bills in the House and Senate are moving through committees.