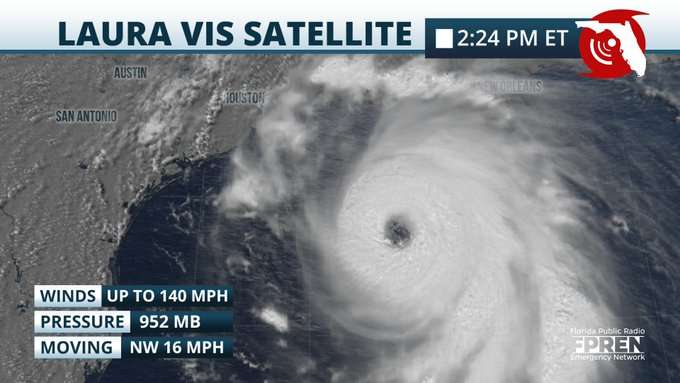 According to the latest update from the National Hurricane Center, Hurricane Laura is an "extremely dangerous category 4 hurricane" with wind speeds up to 140 mph. The storm is expected to strengthen a bit more, before making landfall overnight. Image: Florida Public Radio Emergency Network

Hurricane Laura is now a dangerous Category 4 hurricane and is expected to continue strengthening before impacting the Texas and Louisiana coastlines late tonight and into Thursday morning.

The National Hurricane Center warns of extreme winds and storm surge that could penetrate up to 30 miles inland from the immediate coastline. Meteorologist Dr. Athena Masson said that the window to prepare is rapidly closing.

“Conditions will continue to rapidly deteriorate later on today and into tonight as Laura approaches the shore.”

Masson said portions of the Gulf coast could experience strong rip currents, high seas, and rough surf through the rest of the week but Hurricane Laura does not pose an immediate threat to our region.

As of the mid-morning Wednesday update from The National Hurricane Center, top sustained winds increased to 115 mph. Additional strengthening is forecast, and Laura is expected to be a category 4 hurricane by Wednesday afternoon.

The powerful hurricane is moving toward the northwest at around 15 mph. Hurricane Warnings continued in advance of the storm from San Luis Pass, Texas to Intracoastal City, Louisiana. In particular, the Hurricane Warning includes Galveston, Beaumont, and Lake Charles. Storm Surge Warnings extend from Freeport, Texas to the mouth of the Mississippi River. The Hurricane Center forecast predicts peak surges of 10 to 15 feet above normally dry ground from the Texas-Louisiana border area to Intracoastal City in South-Central Louisiana. Surges of 2 to 5 feet are anticipated as far west as Galveston Bay and as far east as the Mississippi Gulf coast.

Laura has a large wind field, with tropical storm force winds extending 175 miles from the center of the storm, meaning that many residents of Texas and Louisiana away from the storm’s eye are likely to experience these winds tonight. Forecasters said rainfall totals of 5 to 10 inches, with local amounts as high as 15 inches, are likely over western Louisiana, far eastern Texas, and northward into Arkansas through Friday. These rains were expected to cause widespread flash flooding and urban flooding. Forecasters at NOAA’s Weather Prediction Center said these flooding rains may extend as far inland as southeast Missouri, Tennessee, Kentucky, and Indiana Friday into early Saturday morning.

Isolated tornadoes are also possible over far southeast Texas, Louisiana, and southwest Mississippi this evening and tonight, mainly to the east of where the eye crosses the coastline.

Rip currents, high surf, and rough seas are likely to present hazards to swimmers and mariners as far away as Florida’s Gulf coast because of the hurricane’s large size and intensity.

As of the early morning forecast update, Laura was anticipated to strengthen to a category 4 storm Tuesday afternoon. Upper air data and model simulations are showing an increase in wind shear in the final hours prior to landfall. This might cause a slight reduction in wind speed near the eyewall at landfall, but the effects of life-threatening surge and destructive winds would be about the same close to where the eye crosses the coastline.