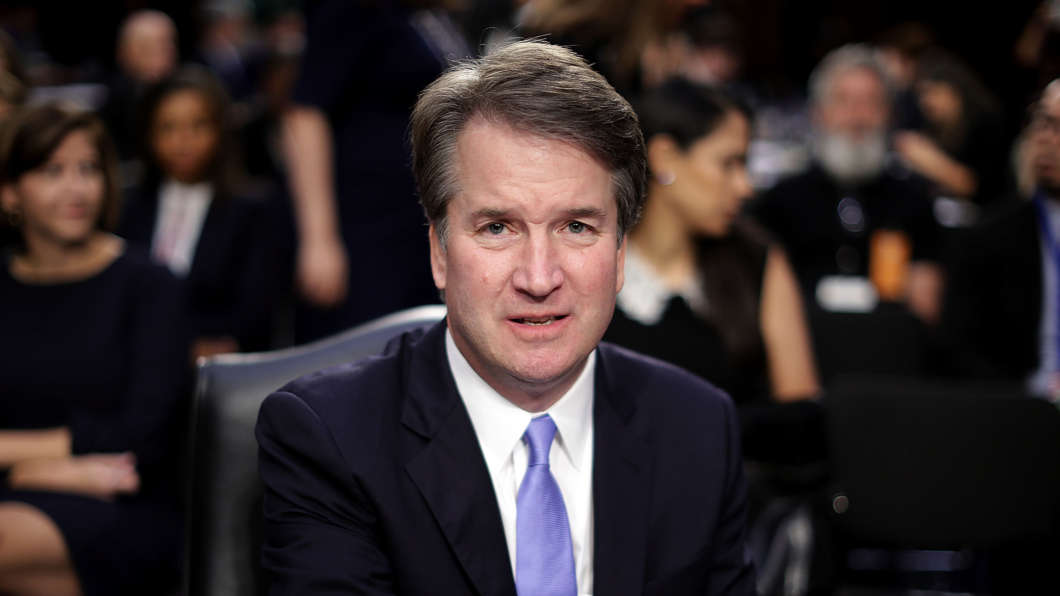 The vote was 50-48. Only one Democrat, Joe Manchin of West Virginia, joined Republicans in backing Kavanaugh. One Republican, Lisa Murkowski of Alaska, voted “present” although she said she opposed the nomination. One GOP senator was absent during the vote because of his daughter’s wedding thousands of miles from Washington, D.C.

In a tweet soon after the vote, President Trump celebrated the confirmation and said Kavanaugh will be officially sworn in soon.

Senators sat at their desks during the vote, which was presided over by Vice President Mike Pence. In the debate preceding it, senators sounded as though they were describing two different men. Senate Majority Leader Mitch McConnell, R-Ky, called Kavanaugh “among the very best our nation has to offer.” Sen. Chuck Grassley, R-Iowa, chairman of the Senate Judiciary Committee, called the 53-year-old Kavanaugh a victim of “an ugly left-wing smear campaign,” and charged Democrats with character assassination.

Kavanaugh had been accused by three women of sexual misconduct while he was in high school and college more than 30 years ago — charges he angrily denied.

Senate Minority Leader Chuck Schumer, D-N.Y., called Kavanaugh’s confirmation “a low moment for the Senate, the court, and the country,” and said of Kavanaugh, “he doesn’t belong on the nation’s highest bench.”

Sen. Patty Murray, D-Wash., who was first elected in the so-called year of the woman in 1992 after the confirmation of Justice Clarence Thomas, said that in confirming Kavanaugh the Senate would be telling young girls and women that “your voices just don’t matter.”

Trump told reporters just before the vote that Kavanaugh is “going to make us all very proud. I also feel very strongly that, in the end, the process, it was really unattractive, but the extra week was something that I think was really good.”

In a tweet Saturday morning, also said that Saturday is a “Big day for America!”

Asked about the #MeToo movement and her husband’s recent comments about its potential impact on men, first lady Melania Trump weighed in on Kavanaugh’s controversial nomination. “I would say if we’re talking about the Supreme Court and Judge Kavanaugh, I think he’s highly qualified for the Supreme Court,” Trump said while speaking to reporters in Egypt during a solo international trip to Africa. “I’m glad that Dr. Ford was heard, I’m glad that Judge Kavanaugh was heard. FBI investigation was done, is completed and Senate voted.”

But when asked whether she believed Christine Blasey Ford who alleged that Kavanaugh sexually assaulted her more than three decades ago when they were both in high school, the first lady would not answer directly. “I will move on that and I think that all the victims they need — we need to help all the victims no matter what kind of abuse they had, but I am against any kind of abuse or violence,” the first lady explained.

In the hours before the vote, police arrested demonstrators who had broken through barriers around the Capitol and tried to climb the building’s steps. Protesters were also heard shouting from the Senate gallery during the roll call.

McConnell told the Washington Post the protests against Kavanaugh “were a great political gift” for Republicans. “I want to thank the mob, because they’ve done the one thing we were having trouble doing, which was energizing our base.”

On Friday, after the nomination cleared a key procedural hurdle with a 51-49 vote, two previously undecided senators, Susan Collins, R-Maine, and Joe Manchin, D-W.Va., announced they would support Kavanaugh. That support all but assures Republicans of the votes they need to push the nomination across the finish line.

In a much anticipated speech on the Senate floor Friday afternoon, Collins said that she believed that Ford was a survivor of sexual assault. Still, Collins said, the allegations “fail to meet the ‘more likely than not’ standard,” and “I do not believe that these charges can fairly prevent Judge Kavanaugh from serving on the court.”

And in a statement issued soon after Collins spoke, Manchin explained he was supporting Kavanaugh notwithstanding the “serious accusations” leveled against the judge and lingering questions about Kavanaugh’s temperament.

“I have reservations about this vote given the serious accusations against Judge Kavanaugh and the temperament he displayed in the hearing,” Manchin said. “And my heart goes out to anyone who has experienced any type of sexual assault in their life. However, based on all of the information I have available to me, including the recently completed FBI report, I have found Judge Kavanaugh to be a qualified jurist who will follow the Constitution and determine cases based on the legal findings before him. I do hope that Judge Kavanaugh will not allow the partisan nature this process took to follow him onto the court.”

Speaking to NPR on Friday, a lawyer for Ford said the California professor’s goal was never to derail the nomination. “Dr. Ford’s goal here was never to impact the process to derail a nomination,” attorney Lisa Banks said on All Things Considered. “What she was trying to do was what she thought was the right thing to do as a citizen, which is to provide the information to the U.S. Senate so they could make the most informed decision possible. Her goal wasn’t to derail this nomination, it was to inform the nomination and she’s done that.”

Kavanaugh will become President Trump’s second appointment to the Supreme Court, creating a conservative 5-4 majority on the nation’s highest court for years to come.