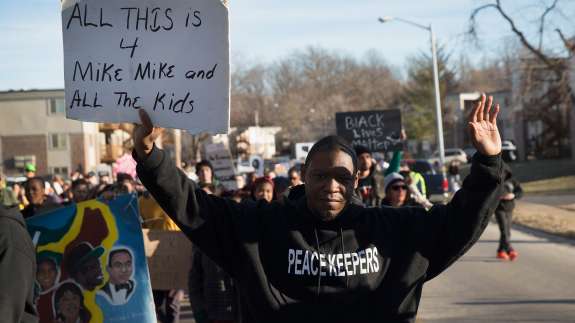 The Justice Department is poised to declare that former police officer Darren Wilson should not face civil rights charges over the death of Michael Brown, law enforcement sources tell NPR. Wilson, who is white, shot and killed Brown, who was black, in August. Brown was not armed.

The development was first reported by The New York Times, which says prosecutors are preparing a memo that will soon close the case.

The Justice Department has been investigating the events that took place in Ferguson, Mo., where Michael Brown, 18, was killed during an encounter with Wilson that set off weeks of protests and confrontations between demonstrators and police.

News of the civil rights inquiry’s likely end comes nearly two months after a St. Louis County grand jury decided not to indict Wilson. Within days of that decision, Wilson resigned from the police force in Ferguson, a suburb of St. Louis.

Attorney General Eric Holder has said the federal investigation is being kept independent from local prosecutors.

“And although federal civil rights law imposes a high legal bar in these types of cases, we have resisted forming premature conclusions,” Holder said, as Carrie reported in late November.

While it seems that the investigation of whether Wilson violated Brown’s civil rights may soon be over, another federal investigation is ongoing. That effort focuses on whether the Ferguson Police Department might itself be guilty of discrimination.

Some in the community viewed Brown’s killing as the latest in a string of “illegal and harmful practices,” as a public defender group told NPR’s Joseph Shapiro in late August.

“To understand some of the distrust of police that has fueled protests in Ferguson, Mo., consider this: In 2013, the municipal court in Ferguson — a city of 21,135 people —issued 32,975 arrest warrants for nonviolent offenses, mostly driving violations.”

Public defender group the ArchCity Defenders, which produced a report on the legal systems in Ferguson and nearby communities, said that its study of the Ferguson police department’s actions suggested the prime motivation seemed to be to raise money, calling court fines and fees the city’s second-biggest source of income.

But the group also noted that Ferguson police stopped black motorists more often than white ones — even though searches of white drivers’ cars were more likely to turn up contraband.

Another demographic detail that raised residents’ suspicions: The majority of Ferguson’s police officers are white, while the majority of the town’s residents are black.