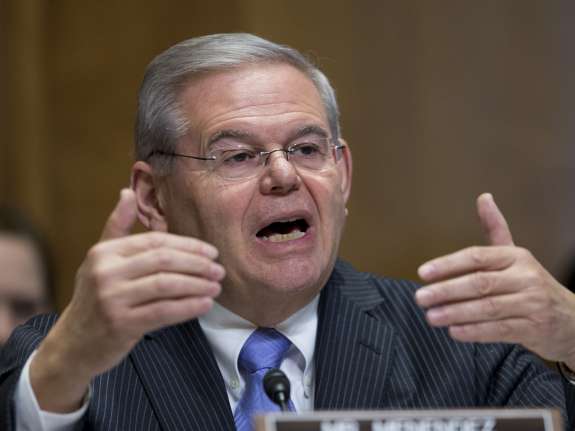 The indictment alleges that Menendez abused his office to benefit Salomon Melgen, a Florida eye doctor who was the senator’s friend and donor. Menendez has always maintained his innocence.

When word came down in March that Justice was preparing to charge him, Menendez held a press conference, saying he had always conducted himself “appropriately and in accordance with the law.”

The charges against Menendez are sure to kick off a tough legal battle that puts Menendez’ political career in question.

A Justice Department spokesperson told NPR’s Carrie Johnson that a federal grand jury handed down a 13-count indictment against Menendez and Melgen — “one count of conspiracy, one count of violating the travel act, eight counts of bribery and three counts of honest services fraud.”

The Wall Street Journal reports that these are the first criminal charges brought against a sitting senator since “the botched prosecution of Alaska’s Ted Stevens seven years ago.”

“Dr. Melgen is already under investigation for possibly overbilling Medicare. The FBI has also probed whether Mr. Menendez used his position to try to help Dr. Melgen with his legal troubles and whether the senator sought to improperly aid Dr. Melgen’s business interests in a Dominican Republic port security company. Dr. Melgen’s lawyer has previously said the doctor acted appropriately at all times.”