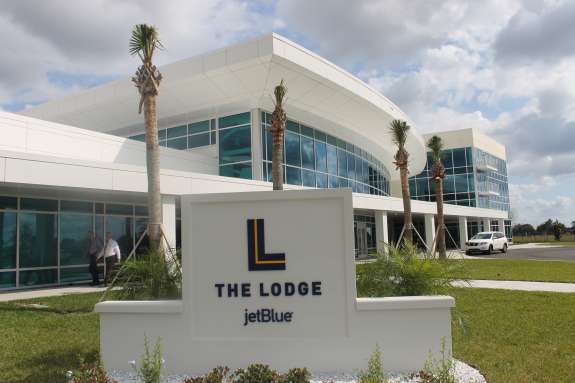 JetBlue trainees will stay at a 196 room hotel on the airline's campus near Orlando International Airport. Photo: Matthew Peddie, WMFE

Jet Blue has opened a new hotel near Orlando International Airport for its employees.

About 7,000 staff who visit the airline’s training facility each year will now be housed on campus- rather than going to local hotels.

Warren Christie, senior vice president of safety, security and training, said the new 196 room hotel is a sign of JetBlue’s commitment to Orlando.

“This project alone brings another 70.”

Christie said employees can now stay on campus rather than having to be shuttled to hotels.

Orlando Mayor Buddy Dyer said the new hotel is a good sign for the city.

“Long term, we want to grow their business here and we want to add additional JetBlue flights as we expand service at OIA,” said Dyer.

Dyer flew to New York Monday afternoon on a trip to promote Orlando.

He said he’ll meet with airline executives and talk to them about adding more flights.