Israel Heads To The Moon 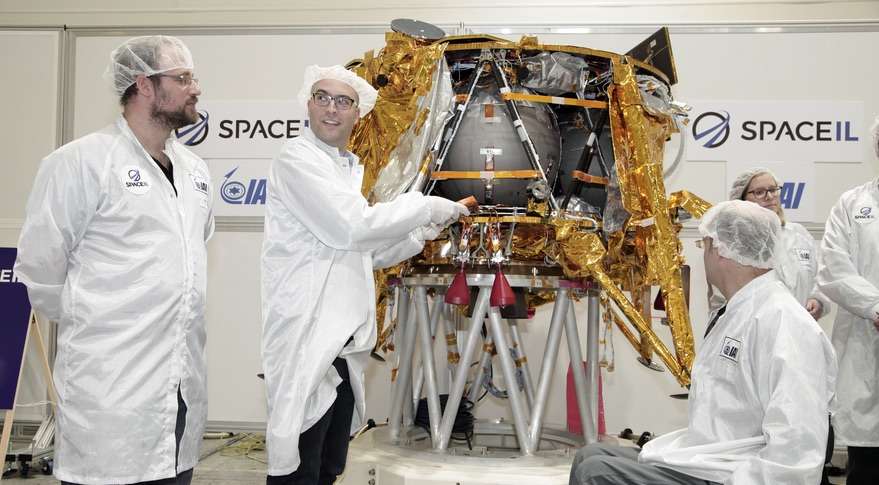 SpaceIL's "Beresheet" lander ahead of its mission to the moon. Photo: SpaceIL

Only three countries have landed spacecraft on the moon — the United States, the former Soviet Union and most recently China. Now the country of Israel is poised to land a robotic spacecraft on to the lunar surface funded by public and private donations.

The spacecraft is about the size of a kitchen-table. It is decked out in reflective gold material used to protect the vehicle from the drastic temperatures of a deep space mission. It’s name is Beresheet  which is Hebrew for “in the beginning.”

SpaceIL is an Israeli non-profit that has been working on the lander since 2011. Earlier this year, the team completed the design, testing and manufacturing of the spacecraft and sent it to the U.S. ahead of its upcoming launch on a SpaceX rocket. A few weeks ago, the Israeli scientists sent it from Israel to Cape Canaveral, Florida.

“I don’t have kids but I feel it’s like letting your baby go and grow up,” said SpaceIL adviser Dafna Jackson. “She’s on her next step before she goes up to the moon.”

The eight years that led to this moment included financial uncertainty and technological challenges. “The countries that have done this before have done it this with a budget of billions of dollars. We don’t have that budget. We have a budget of about $100 million,” she said.

The project stemmed from a global challenge from Google called the Lunar X-Prize which dangled a prize of up to $30 million to the first private company to land on the moon. The X-Prize was cancelled when the five finalists, including SpaceIL, missed a deadline of launching back in March of 2018. But the state and private donors continues to support the mission and the project pressed on.

“The reason that they entered the project is they wanted to give the Israelis a sense of pride and unity,” said Jackson.

On top of that, Israel’s space program is small, launching only a handful of military and commercial satellites, and the country hasn’t sent anything to the moon.

“There’s some disadvantages in the sense that you don’t have that kind of track record and kind of experience, hands on experience, with doing that,” said astrophysicist Gal Sarid. He’s from Israel, now he’s working with the Florida Space Institute at UCF

Sarid has been following his home country’s efforts to land on the moon and said the original Lunar XPrize challenge participants to work with less resources to achieve more.

The spacecraft is small — only about 350 pounds before getting loaded up with fuel, and it has to share a ride to space. The lander is a secondary payload riding shotgun on a SpaceX Falcon 9 rocket.

Adding to the complexity, the lander won’t head directly to the moon, instead making its orbit around the Earth bigger and bigger, eventually getting pulled into the gravity of the moon in about two months.

“Everything was very complicated,” said Jackson. “It is a very complex project.”

When the lander arrives on the lunar surface it will hop, snap a selfie and deploy a handful of scientific instruments — all original requirements of the Lunar XPrize challenge. It wouldn’t make much sense for Israel to be doing this otherwise.

SpaceIL hopes the landing will inspire a generation of new aerospace engineers and students. “I think that once we launch and everybody sees and everybody studies how we did it,” said Jackson. “We will definitely become a very big player in the space industry. 100 percent.”

The launch is scheduled for February 21 from Cape Canaveral.

This story was first heard on NPR’s Morning Edition February 18, 2019.