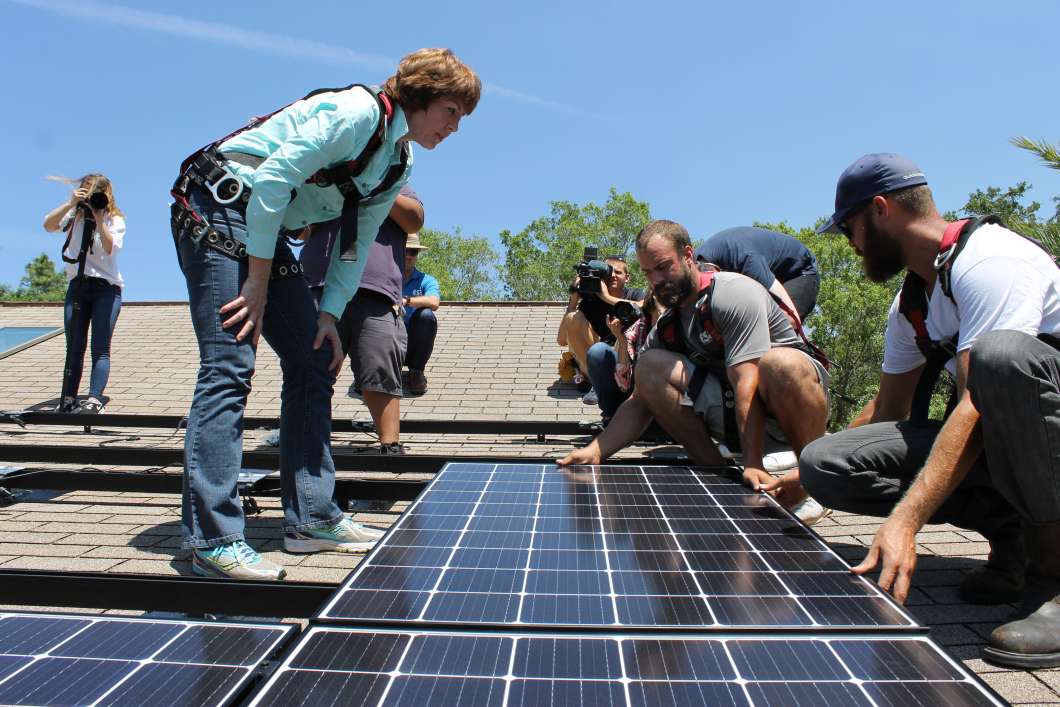 Former US Rep. Gwen Graham launched her campaign for Governor this week. On Wednesday she helped attach solar panels to the roof of a house near Orlando, carrying on a workdays campaign tradition started by her father, former Governor Bob Graham in the 1970s. Photo: Matthew Peddie, WMFE

Ending high-stakes testing, safeguarding the water and keeping squabbling lawmakers in line. Those are some of the goals of former Democratic Congresswoman Gwen Graham, who launched her campaign for governor this week.

Back in 1977 Bob Graham kicked off his campaign for the governor’s office with a series of workdays, to see what ordinary Floridians went through. His daughter is carrying on that tradition in her campaign, and we caught up with her on Wednesday as she helped to attach solar panels to the roof of a house near Orlando.

“I’m very concerned what the last 20 years have done to this state, with monopoly government in Tallahassee,” said Graham.

One of the things she wants to focus on is public education.

“I’ve seen the sad reality of our school system now, it’s no longer about educating, it’s about how many tests can these kids take,” she said.

And she said she’s not impressed with the way the legislative session has gone.

“To say that it’s dysfunctional is an understatement,” she said.

“I have an advantage that other people don’t have, which is I don’t have to go out for a year and beg for money to try to get name ID,” he said.

Morgan has been on a speaking tour of political clubs statewide.

“The thing that I’ve heard that’s made me most interested is when Republicans come up to me and say ‘I’m a Republican but I could vote for you'”, he said.