Hurricane warnings issued ahead of midweek arrival of Nicole 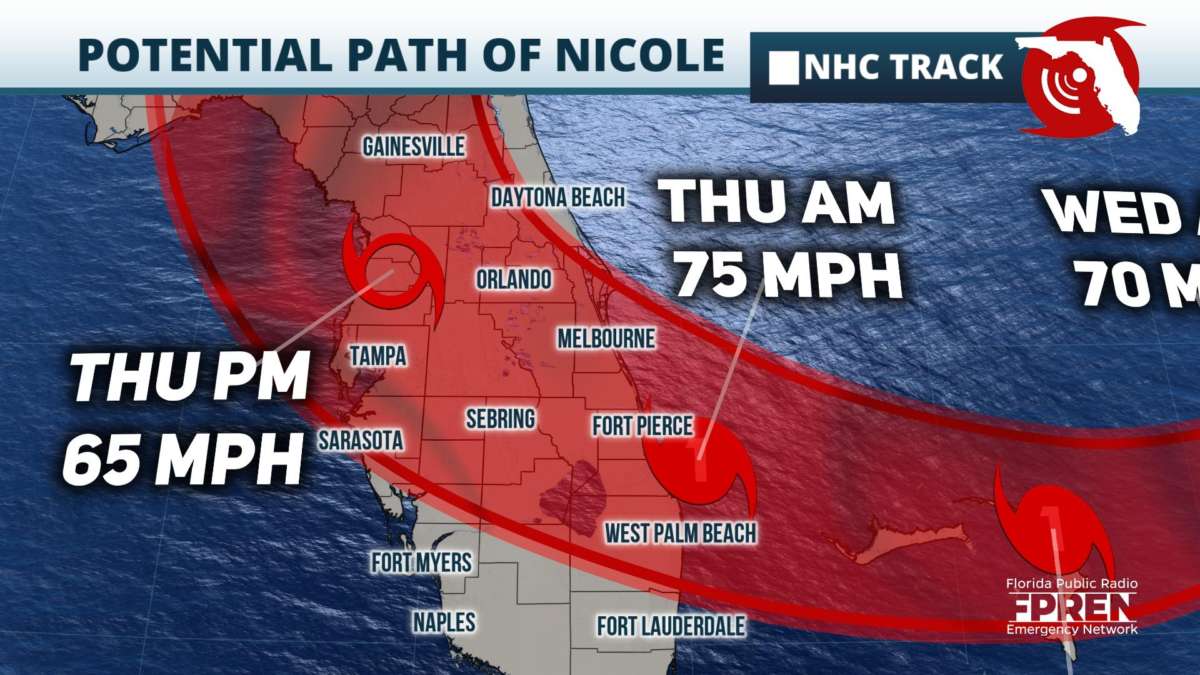 Residents along portions of Florida’s east coast are under hurricane warnings Tuesday night ahead of what is forecast to be Hurricane Nicole’s arrival early Thursday.

Hurricane warnings extend more than 200 miles, from the Flagler-Volusia County border to Boca Raton. Tropical storm warnings are in place from Hallandale Beach to Boca Raton and areas north of the Flagler-Volusia County border. The areal extent of these warnings goes as far west as I-75 and includes inland cities like Orlando, Jacksonville, Gainesville, and Ocala. Tropical storm watches include Tampa, Fort Myers, and Lake City. Storm surge warnings stretch from the mouth of the St. Marys River to north of Miami. Storm surge warnings include the St. Johns River basin, which was hard hit by Ian in late September. A storm surge watch is in effect for the Big Bend and Nature Coast through the end of the week.

The advisory issued by the National Hurricane Center Tuesday night for Tropical Storm Nicole has maximum sustained winds of 70 miles per hour. Tropical-storm-force winds, which are 39 to 73 miles per hour, stretch nearly 800 miles across. Nicole has officially begun the track southwest and is moving at approximately 10 miles per hour. Official forecast products from the National Hurricane Center depict a gradual strengthening trend, with Nicole likely becoming a hurricane Wednesday afternoon before making landfall as a Category 1 hurricane between Cape Canaveral and Boca Raton.

Impacts along the east coast of Florida will be significant, especially where hurricane warnings are in place. Hurricane warnings mean that winds of at least 74 miles per hour are expected, with most wind gust forecasts peaking over 100 miles per hour. In areas where tropical storm warnings are in place, tropical-storm-force winds of between 39 and 73 miles per hour are expected Wednesday into Thursday. A tropical storm watch means that tropical-storm-force winds could develop, but certainty in that potential isn’t as high as in warning areas. Residents are encouraged to stay updated on the forecast in the coming days, as wind alerts could be expanded slightly over the next 12 to 24 hours. Residents in the Panhandle pay close attention to where exactly Nicole is forecast to go, as impacts there could be more impactful if Nicole emerges over the Gulf of Mexico.

Impacts are forecast to be most intense in coastal areas due to the multi-faceted aspect of storm surge, erosion, and flood potential. Surge forecasts along the east coast of Florida are between three and five feet from the First Coast to the Treasure Coast. Storm surge could be locally higher, especially near and north of where Nicole makes landfall. A number of evacuation orders have been issued along east coast counties, especially in Zones A and B. Storm surge forecasts are maximized along the Space Coast and Treasure Coast, where as much as 5 feet of the surge are possible. The Nature Coast on Florida’s west coast could see a local maximum of up to 4 feet. Coastal inundation and flooding are possible, especially along the St. Johns River where flooding from late-September’s Hurricane Ian is still ongoing north of Orlando. As a reminder, coastal inundation is possible Thursday and Friday, especially during high tide times.

Rainfall from Nicole will likely be substantial, especially across central Florida where rainfall totals could climb to nearly a half foot. It will not take much for flooding to occur in these areas, as many of these locations are running a surplus from Ian’s impact nearly six weeks ago. The Weather Prediction Center has much of the Peninsula under an elevated risk for flash flooding Wednesday and Thursday, as heavy rain associated with Nicole could be too much for drainage systems to withstand.

As with any landfalling tropical system, the risk of a few tornadoes will also be possible. The Day 3 outlook for severe weather issued by the Storm Prediction Center depicts a “marginal” risk from Jacksonville to Miami inland to the Florida Turnpike. This area is where a few tropically-induced tornadoes are possible. Tropical tornadoes tend to be weaker, however, they are well-known for developing quickly and without much-advanced notice. Tornado watches will likely be issued as Nicole makes landfall Wednesday into Thursday.

“It is critical for Floridians to review their disaster preparedness plans and follow all directions from local officials in anticipation of potential impacts,” Florida Division of Emergency Management Director Kevin Guthrie said in a press release issued Sunday. Floridians are encouraged to have their hurricane plan in place and to evacuate if told to do so by local officials. Every resident should have multiple ways of getting weather alerts, especially during tropical events where tornadoes could quickly form. The forecast will likely be fine-tuned in the days to come, so monitor additional updates from trusted and reliable sources like the National Hurricane Center.