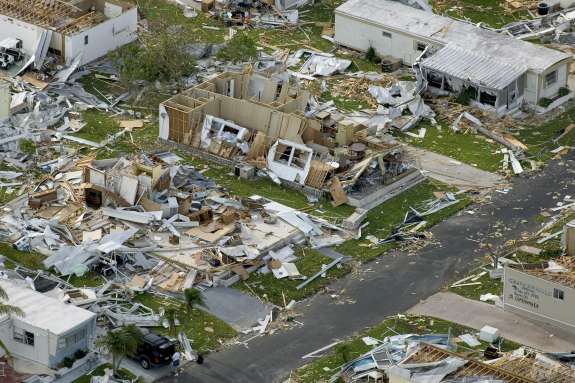 Hurricane Charley was one of eight major storms that devastated parts on Florida in 2004. This photo was taken in Charlotte County. Photo: Wikimedia Commons.

Insurance payers in Florida will receive relief in the New Year. Starting tomorrow, Floridians will stop paying a 1.3 percent hurricane tax for severe damage from eight major hurricanes in 2004 and 2005, devastating parts of the state, include Orange and Osceola counties.

The Florida Hurricane Catastrophe Fund started collecting the tax on most insurance, including car, business, rental, and home. The fund has paid off its $2.9 billion debt more than a year ahead of projections- and there’s $10 billion in reserve.

“Our economy is growing and our state was able to make some very smart investments to make sure we could be able to pay this off earlier than expected.”

However, she’s remaining cautiously optimistic about the fund.

“We only have about $10 billion in that CAT fund, and that money could be depleted if we have a very large storm. Just because that assessment is going away now doesn’t mean it’s not coming back in the future.”

Officials with the Florida Hurricane Catastrophe Fund say it would take a rare storm—one that would occur once in 23 years–to deplete the reserve and require another tax.