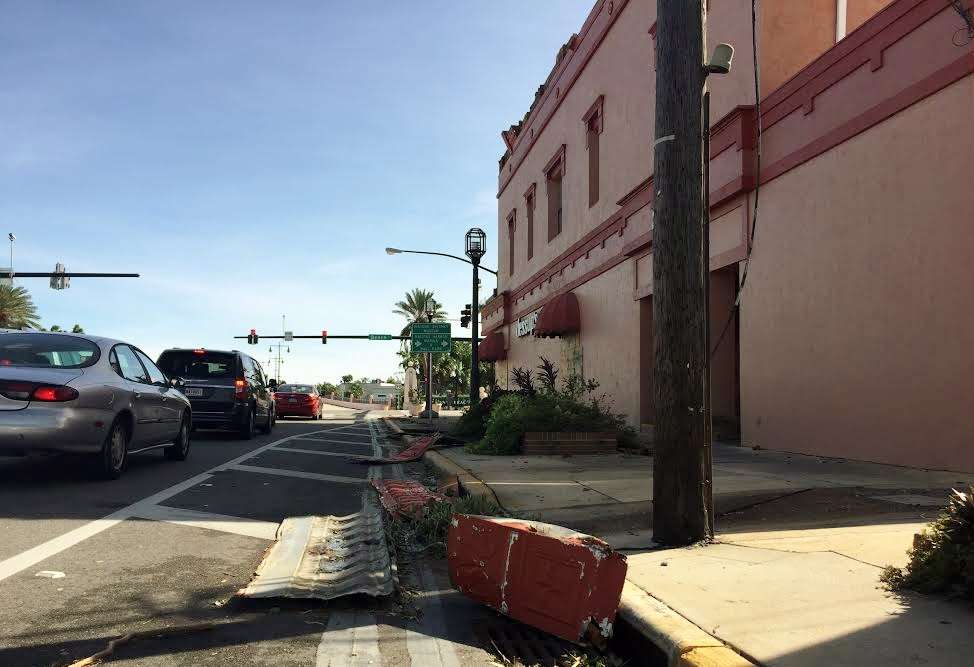 The hurricane ripped part of the facade of this building in historic downtown Daytona Beach. Photo: Renata Sago.

On Sue Keating’s porch a large wind chime swayed back and forth, bringing calm after the hurricane damaged her four-bedroom, three-bath home just blocks from the beach.

“I was really wondering if we’d have a house,” she said.

In thirty years of living in Daytona Beach, Keating had seen her share of hurricanes. She always stayed at home, sometimes without losing power. Warning after warning from Governor Rick Scott and the news made her think differently this time. She left home with a bible, some important papers, and family photos to spend the night in the hospital where her husband Gerard was having surgery.

“I just count my blessings that we were lucky enough to come back,” she said. “The awning on the front of the part of the house got totally ripped apart and mangled and a lot of trees got blown over and damaged and we got some water intrusion in the house.”

More than 3,500 residents left their homes for shelters across Volusia County. Many came back home to property with insulation ripped out and roofless foundations. Donna Love Ridenour was shocked to see what had happened to her neighbors’ homes. Two doors down, her neighbor lost the ceiling in the kitchen.

Like many homeowners, Ridenour and her husband stayed huddled in closets with family and pets during the storm. They lost power and furniture.

“We got flooded in the garage and everything and then up in the attic our side blew in, so all of our insulation, we’re going to have to take out and then we got leaks in the ceiling in the house and then all the fencing and everything. Other than that, this is material things, you know?”

Volusia County officials are assessing how much damage the Hurricane caused, a process that could take weeks. All city parks and community centers in Daytona Beach will be closed until then. Unofficial estimates project it will cost more than $100 million dollars to repair the homes and buildings that took a hit.

Inside the Emergency Operation Center hours after the storm passed, staff took calls from residents with trees down, power lines hit, and property severely damaged. Director Jim Judge hopes to get things back to normal quickly. The county will receive federal money thanks to a disaster declaration, and the property appraiser’s office is assessing damage.

Judge expects to Volusia County to meet a more than $1 million threshold for needed aid.  This was the first time the new emergency management facility had been fully activated for a hurricane. Judge and first responders have received praise from residents and officials for their quick response. He thanks years of training for this moment.

“When the drill’s over at noon, everybody gets to go home. This was the real deal,” he said. “We had our game faces on. We didn’t get to go home and we’ll still continue.”

On Beach Street in historic downtown Daytona Beach, Mario Stenburger is already getting things back to normal. The day after the hurricane, clients at his restaurant Dancing Avocado Kitchen sat comfortably munching on food next to a boarded up window.

“Up on the board, my wife’s not proud of it, but there’s a big ‘Preparation H’ but it’s the sign of a hurricane,” he described. “And then it says on the board, Charlie, Francis and Floyd. We’ll be adding Matthew to that.”

The entrance to the restaurant has a board that reads ‘In God We Trust.’ That is what Stenburger said has carried himselfm his clients, his neighbors, and those in other parts of the region impacted by Hurricane Matthew. He was afraid he might lose his roof during the storm. He said he, instead, witnessed a newfound kindness from strangers in a time of panic and need.

“This storm has had like a neutralizing effect where it doesn’t matter who you are, who you’re voting for, what you’re going through, we’re all people going through a storm.”

Officials expect for Volusia County to be back and running in the next few days.