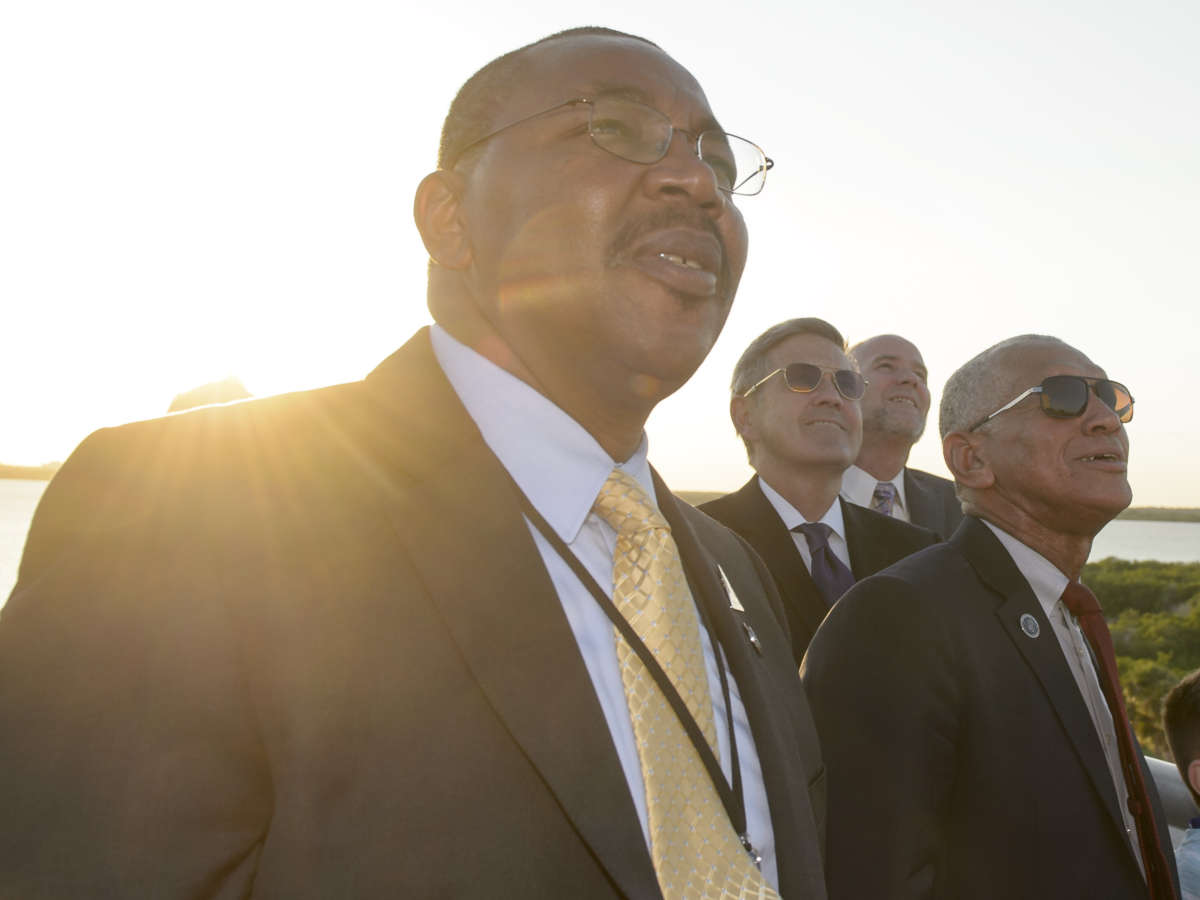 NASA released the first batch of images from the James Webb telescope this week, wowing the world with never-before-seen views of ancient and distant galaxies.

The approximately $10 billion telescope was decades in the making, a partnership with the European Space Agency and the Canadian Space Agency that involved some 20,000 collaborators across 29 countries and 14 U.S. states. It finally launched in December 2021 after a long string of setbacks and delays that led some astronomers to fear it might never get off the ground.

Gregory Robinson wasn’t one of them. The career NASA employee was brought in as director of the James Webb Space Telescope Program in March 2018 to help get the project back on the rails, over the finish line and into space. Despite the challenges, he tells Morning Edition‘s Steve Inskeep that he never doubted whether it would work.

“As we moved closer to launch and even as we launched, I never had a concern on the outcome,” Robinson says. “My biggest concern was, ‘Let’s get on with it already, get to the launch site and get it off the ground.’ ”

While Robinson credits the work of many others in making the telescope a success, he’s received special recognition for the role he played — including being recognized as one of TIME’s most influential people of 2022.

In his tribute, NASA astrophysicist and Nobel laureate John Mather wrote that Robinson “channeled the forces of human nature and ingenuity,” from NASA and Congress to foreign space agencies and aerospace companies.

“Our teams orbit around Greg, because we trust him to ask questions and understand our concerns and respect our opinions,” Mather wrote. “He makes it look easy, but I can barely imagine how he does it, and I admire him tremendously for it.”

Robinson — who most recently served as the deputy associate administrator for programs in NASA’s Science Mission Directorate — has worked on several high-profile missions and held numerous leadership roles since joining the space agency in 1989.

But Robinson, the ninth of 11 children born to tobacco sharecroppers in rural Virginia, says he didn’t exactly grow up dreaming about space … other than watching the moon landing.

“I often refer to Webb as our Apollo moment today,” he adds. “But space was not high on my list.”

Football was Robinson’s ticket to college — and space

Danville, Va., is less than five hours away from agency headquarters in Washington, D.C., but Robinson says his childhood was “a long way from NASA.”

Under the sharecropping system, a landowner will allow people to farm their land in exchange for a portion of the crops produced. Robinson describes it as a product from slavery through Jim Crow that still continues today.

“There are lots of nuances in there … who keeps the books, and who alters the books. And as you go through that process there’s winners and there’s losers,” he says. “And it keeps the losers tied to the farm so they can never get away to go on and do other things.”

Robinson — who began his education in a racially segregated elementary school — recalled to The Washington Post that his teachers would tell students they could do anything they wanted if they had an education, which appealed to him because he wanted to “get out of Danville and have a better life.”

He tells Morning Edition he really enjoyed math and science, and had a knack for those subjects. He also had a knack for football, which earned him a scholarship to Virginia Union University in Richmond.

“I thought I was a top-notch football player, and for my high school and my county and my district I probably was,” he says. “But when I got to college the real athletes showed up, and that was a big difference. But it was really my ticket to get to college.”

He wanted to major in engineering, but Virginia Union didn’t offer it. They did have a dual degree program with Howard University, so he ended up graduating with degrees in both math and electrical engineering.

It was during Robinson’s time at Howard that NASA landed on his radar. He recalls having friends who interned at the Goddard Space Flight Center in nearby Maryland and really enjoyed it. And while he didn’t originally intend to work in the industry, he eventually made his way to NASA too.

“Once you walk through the gate and get started, the bug bites you fast and the bug never stops biting,” he says.

His upbringing informed his work at NASA, and whatever he does next

Robinson has worked on many spaceflight and space shuttle missions over the years and held notable leadership positions, including as the deputy center director at NASA’s John H. Glenn Research Center and NASA deputy chief engineer.

And he’s applied lessons from his childhood to even his most high-tech projects.

Robinson says he learned a lot living through the process of school desegregation, including how to work with many different types of people.

He also credits sports with teaching him the importance of leading, following and being a team player.

“Both of those [lessons] really helped shape me early on,” he says. “And, of course, a really good strong family was important as well.”

Robinson’s latest mission was to get the Webb telescope to launch and through commissioning. With that done, what comes next? He laughs that he’s worked himself out of a job, and says he’s considering retirement.

“Of course I have a lot of knowledge and experiences, life and professional, that I still want to share and increase impact across the globe,” Robinson adds. “So I still plan to do some things, but it’s time to go to the next phase of life.”

The audio for this interview was produced by Lilly Quiroz and edited by Simone Popperl.