History Of Phosphate Mining In Florida Fraught With Peril 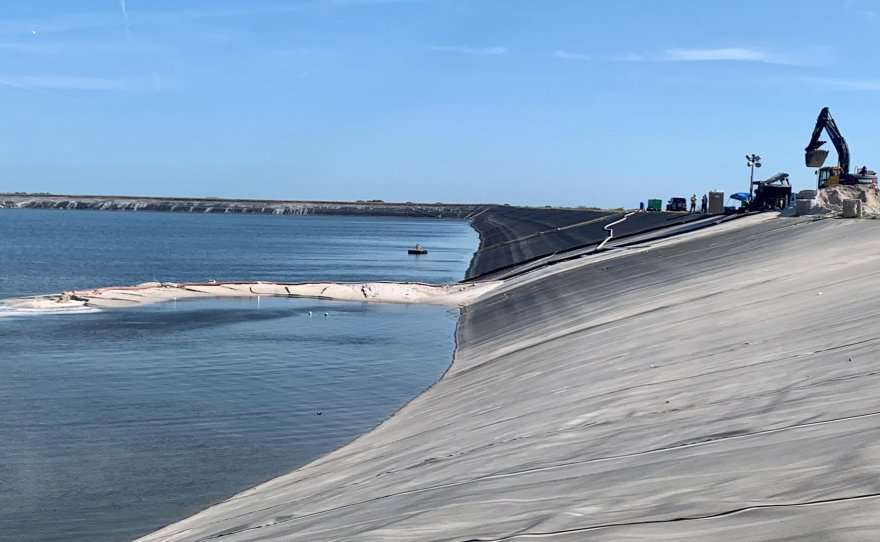 Construction crews atop the Piney Point gypstack labor to seal the breach on May 16. Photo courtesy WUSF

At the construction entrance to the Piney Point phosphate plant – off Buckeye Road in northern Manatee County, just south of the Hillsborough County line – the smell of phosphate and gypsum hangs heavy in the air.

A bulldozer is busy pushing sand into a hole from which more than 200 million gallons of tainted water flowed into Tampa Bay. This isn’t the first time this has happened. Accidents like this fill the history books in Florida, including two here at this very site.

ALSO READ: What Mosaic Is Doing With Its ‘Gypstack’ To Prevent Another Piney Point Disaster

“We’re down to about 340 million gallons that could breach in totality in a period of minutes, and the models for less than an hour are as high as a 20-foot wall of water,” he said during a news conference, when 300 families were evacuated for several days when it looked like a breach in the gypstack was “imminent.”

Long before Piney Point, phosphate processing plants in the greater Tampa Bay region have caused some of Florida’s worst environmental disasters. Accidents like these fill the history books in Florida.

Piney Point is not even close to the worst.

Then there’s the most recent disaster.

“Piney Point is one example of the problem, but it’s not the only one. It’s not unique,” said Jaclyn Lopez of St. Petersburg. She is the Florida Director of the Center for Biological Diversity, a nonprofit environmental group based in Arizona.

“We want to make sure that as this industry continues to grow and change, that it’s not leaving behind this toxic legacy for Florida to deal with.”

There are 27 phosphate mines in Florida, covering nearly half a billion acres.

Phosphate pebbles were found in the Peace River in the 1880’s, setting off a mining rush where Hardee, Hillsborough, Manatee, and Polk counties meet. “Bone Valley” was named for the large number of prehistoric fossils found there.

Bone Valley holds the nation’s largest known deposits of phosphate, which is used to make fertilizer used in large-scale farming around the world.

Some of these mountains of phosphate waste tower 500 feet over the surrounding countryside. That’s taller than all but four skyscrapers in downtown Tampa. They’re made of byproducts from the production of fertilizer and smell like something you’d spread on your lawn. Cradled inside are hundreds of millions of gallons of “process water,” which contains a diluted mixture of everything from phosphoric and sulfuric acid to ammonia.

Two dozen of these “gypstacks” loom over Florida. But most people don’t even know they exist.

Stand along Tampa’s Bayshore Boulevard and look east across Hillsboro Bay, and in plain sight are two of these flat-topped mountains, resembling mesas found in the American West. They’re close to Port Tampa Bay, where phosphate rock and fertilizer is its biggest export.

Lopez says the location of the Riverview stacks could spell trouble.

“Riverview’s gypstacks are extremely problematic – particularly because of sea level rise,” she said. “That are at ground zero for Tampa Bay if we get a big storm that pushes a lot of water up in this area and with the projected sea level rise that our area is going to be experiencing.”

But we can’t just get rid of gypstacks.

First, the water contains some nasty stuff, like heavy metals.

Second, it’s radioactive. Just slightly. So you won’t likely get sick unless you camp out on top of a mine for decades.

“We are saddled now with over a billion tons of radioactive waste. The radioactive half-life of some of these constituents like Radium 226 is 1,600 years,” Lopez said. “So this isn’t just a me and you problem, or even for our kids. This is going to be the legacy of Florida for hundreds of years to come.”

So what do we do with this stuff?

Last year, the Environmental Protection Agency approved the use of the contents of gypstacks for road base. In April, a coalition of environmental groups – including the Center for Biological Diversity – sued, saying using phosphogypsum would expose the public to a potential cancer risk. They say it’s better to keep the toxins concentrated in these stacks, rather than spreading it around.

Does that mean these toxic mountains are going to be a permanent feature of Florida’s landscape? Jackie Barron is a spokeswoman for Mosaic, the world’s largest phosphate producer. They operate four active mines in the state – including the Riverview stacks and every mine left in Bone Valley. She says they’re looking for solutions.

“So the hope would be that they are not a permanent fixture,” Barron said. “That with the approval by the EPA for use in road base, As we get to how we distribute this – who buys it? What does that market look like? – as we begin to answer those questions, and the application questions – that over time, these would become a thing of the past. But that is a very, very long process ahead of us.”

The only outcome right now – is as phosphate deposits are depleted, existing gypstacks will be “closed.” That means they remain, and phosphate producers treat the water inside and cover the stacks to keep rain water out.

So Bone Valley will continue to be dotted with these towering mountains. Which means another disaster could be one hurricane or sinkhole away.