Hermine Floods Coastal Areas In Florida Before Heading Into Georgia 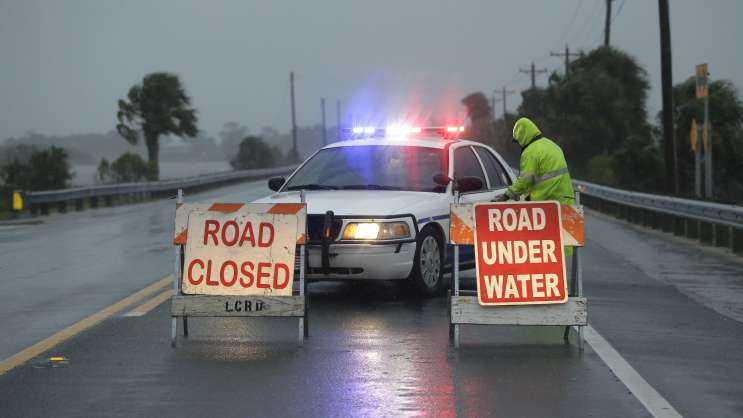 Hurricane Hermine made landfall early Friday morning just east of St. Marks, Fla., as a Category 1 storm with 80 mph winds, but weakened to a tropical storm as it moved further inland.

The National Hurricane Center expects Hermine to produce “a large extent of dangerous winds, life-threatening storm surge and flooding rains well to the east and southeast of the path of the center.”

The storm is expected to cross over southeastern Georgia during the day Friday, pass the coastal Carolinas overnight and move out over the Atlantic Ocean on Saturday, the National Hurricane Center says.

Florida Gov. Rick Scott said at least one person has died, killed when a tree fell on him, The Associated Press reports.

Schools near the Florida coast have been closed so they can be used as staging areas for emergency responders, member station WFSU reports, and many coastal residents have been urged to evacuate their homes. A storm surge as high as 9 feet is expected, NHC forecasters say.

The AP quoted Tallahassee Mayor Andrew Gillum as saying the storm downed trees and knocked out power to some 100,000 residents. Outages also were reported in Georgia and the Carolinas.

As the storm moves east, the Weather Underground’s WunderBlog says rainfall could total 6 to 10 inches across broad swaths of the Southeast, with isolated areas getting as much as 15 inches.

When it swirled ashore in Florida, the storm ended a “drought”: The state had gone nearly 11 years without a hurricane making landfall. Wilma hit Florida in 2005 as a Category 3 storm.

And just by reaching hurricane strength, Hermine broke a three-year streak without any hurricanes in the Gulf.

In a statement Thursday evening, Florida’s governor urged residents to be alert, follow safety plans and evacuate if asked.

“It is still up to every Floridian to do their part to make sure they and their families are ready,” the statement read. “For the first time in over a decade, Florida is facing a hurricane. Hurricane Hermine is going to be here in the next few hours and everyone must take this seriously. Please remember that while we can rebuild your home or your business, we cannot rebuild the loss of life.”

The governors of Florida, Georgia and North Carolina had all declared states of emergency ahead of Hermine.

In Georgia, the AP reported, some authorities were urging those who live in mobile homes to get to shelters ahead of the storm.