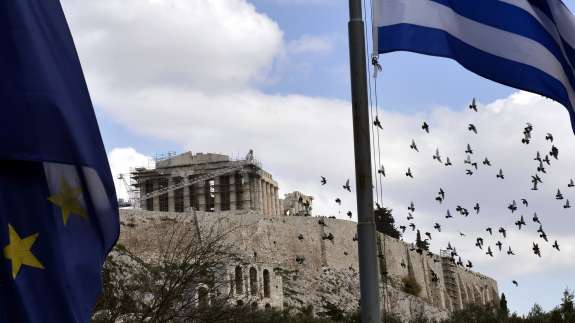 Greece's hopes for reaching a new compromise with Eurozone members on the terms of its loans are seen as hinging on promises to reform its economy — and submit to outside inspections.
Image credit: Louisa Gouliamaki

With the bailout package that has kept Greece’s economy afloat set to expire in just over a week, the country has formally asked Eurozone members for a six-month extension. Finance ministers will hold an emergency meeting Friday to consider the proposal.

Since the start of the recent debt crisis, Greece has received hundreds of billions of dollars in loan packages. That money has been accompanied by demands from Germany and other nations that Greece adopt austerity measures and hit budget targets — a situation that has sparked resentment and suspicion in Greece.

From Athens, John Psaropoulos reports for our Newscast unit:

“A similar Greek request on Monday divided the Eurogroup, because Greece’s new left-wing government insists on receiving the money without austerity terms. It says the next six months will be used to renegotiate the spending cuts and reforms Greece’s European partners have ordered it to make.

“But Greece needs to convince them to finance that truce, because although it now has a balanced budget, it cannot afford the $25 billion in debt repayments that it faces this year.”

The current agreement was meant to end in December, but it was extended to Feb. 28. Greece’s hopes for reaching a compromise with Eurozone members are seen as hinging on promises to reform its economy — and submit to outside inspections.

The promises also include a pledge to fight corruption and tax evasion, says Reuters, which reports seeing a document in which “Greece pledged to meet its financial obligations to all creditors, recognize the existing EU/IMF program as the legally binding framework and refrain from unilateral action that would undermine the fiscal targets.”