GOP Expected To Pass Its Health Care Bill At Long Last, But Still A Long Way To Go 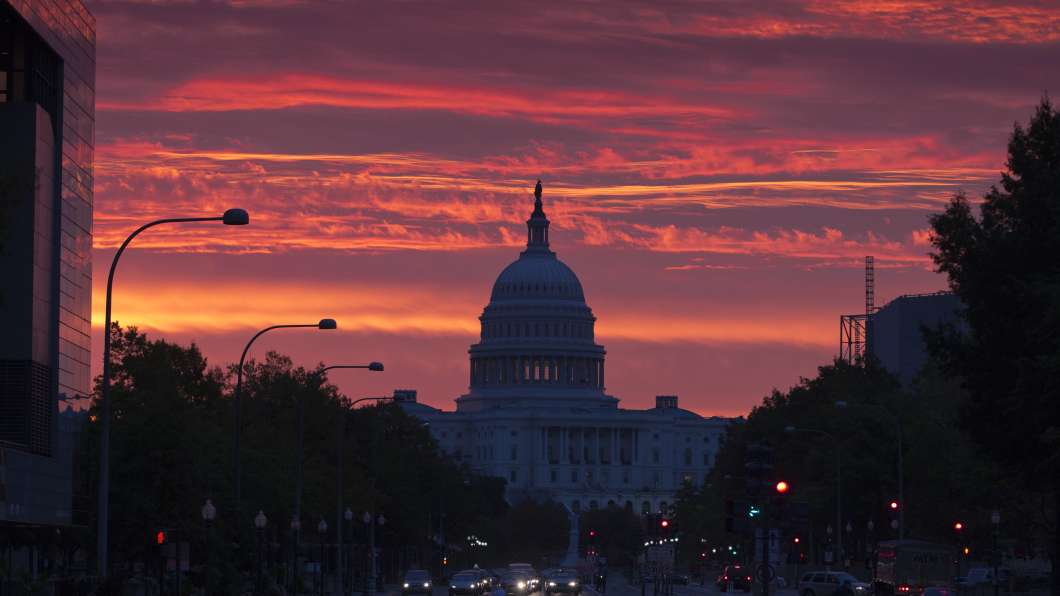 The U.S. Capitol dome seen at sunrise in Washington. The House GOP believes it has the votes to pass a repeal-and-replace health care bill, but this likely won't be the final version of the law.
Image credit: J. Scott Applewhite

Republicans appear to have finally gotten their health care bill.

After seven years of repeal-and-replace rhetoric against the Affordable Care Act, two presidential campaigns waged for and against it and a recent high-profile failure, GOP House leaders say they have the votes for their bill.

Trouble is: this bill is likely never to become law — at least in its current iteration.

Here’s why: While the bill is expected to pass the House (narrowly) Thursday afternoon, it still has to go to the Senate. It’s being done with a wink and a promise that the Senate will overhaul substantial portions of the bill.

“This thing is going to the United States Senate. It’s going to change in my view in the United States Senate in some way,” Rep. Tom Cole of Oklahoma, a deputy whip in the House, told NPR’s Morning Edition. (He’s one of the people in charge of making sure Republicans have the votes.) “Then we have to have a conference to work out the differences. If we can do that, then it has to still pass the House and the Senate again before it ever gets to the president. So at some point, you just have to move.”

Sure, the Senate is controlled by Republicans, too, but they have an even slimmer majority there with equally fractious divisions.

Senate Majority Leader Mitch McConnell is going to allow amendments. That means the bill will change. And if even a comma is inserted, it has to pass the House — again.

And that is inevitably going to bring back this whole game of whack-a-mole in the House.

Wait, there’s more. Because Democrats aren’t going to sign onto something that guts the coverage mandates of the Affordable Care Act, Republicans can’t get 60 votes to advance the legislation.

So in order to pass it, they’re going to have to use the process known as reconciliation. That allows legislation to pass with just a majority (plus one). But there’s a catch — it has to be tied to the budget.

Get ready to hear a whole lot more about the “Byrd Rule.” What’s that? The Committee for a Responsible Federal Budget explains it this way:

“Although reconciliation bills are granted many privileges that are not available to most other legislation (see Reconciliation 101), they remain bound by several conditions. Some of these restrictions championed by former Senator Robert Byrd (D-WV) and established in Section 313 of the Budget Act are jointly referred to as the ‘Byrd Rule.’ The Byrd Rule disallows “extraneous matter” from being included in a reconciliation bill, extraneous matter being defined in three major categories of restrictions.

The umpire of what qualifies under the Byrd Rule is the Senate parliamentarian. Her name is Elizabeth MacDonough. Politico wrote of her in 2015:

“[S]he may very well be the most powerful person in Washington in determining how far Republicans can go in trying to repeal Obamacare. As the Senate parliamentarian, MacDonough will make the decisions on which pieces of the law qualify to be repealed using a complicated budget procedure called reconciliation. Her decisions would allow Senate Republicans to vote to kill major provisions of the health care law under a simple 51-vote majority without giving Democrats a chance to filibuster.”

MacDonough was appointed in 2012, and even though she’s liked on Capitol Hill by both sides, past parliamentarians (known colloquially on the Hill as “parls”) have come under fire because the majority party didn’t like how they ruled. More from Politico:

“Republicans protested decisions by then-parliamentarian Alan Frumin in the 2010 health care reform fight, when Democrats used the budget fast-track tool to pass a small part of the Affordable Care Act. In 2001, Republicans fired Robert Dove as parliamentarian after he ruled against them on how many reconciliation bills could be used. That was actually his second stint in the job: Democrats had fired Dove when they took the majority in 1987.”

Reconciliation — and what fits and doesn’t fit into it — isn’t the GOP’s only complication. Their biggest one is the policy itself. It has a lot of shortcomings.

The nonpartisan Congressional Budget Office said of the last iteration of the House bill that it would save money but would leave some 24 million without insurance.

So the GOP bill would be less generous in terms of benefits and cover fewer. And the only reason it would save money is because the repeal bill would cut $880 billion from Medicaid.

That would break President Trump’s promises of “insurance for everybody” and “no cuts to Social Security, Medicare & Medicaid.”

The CBO won’t get out an analysis of the bill before Republicans are planning to vote. Politically, that gives them a chance to wipe their brows and not have to defend something that could be difficult to defend.

It’s morally questionable, though, to vote on something without knowing its cost or consequences. And what happens when the CBO score does come out — and they’ve already voted for it without the opportunity to make changes?

Trump claimed as late as this week that this bill would guarantee people with preexisting conditions would continue to be covered. But Republicans’ attempts at doing that are very different than how Obamacare achieves it.

The GOP plan would essentially allow states to take sicker people out of the broader pool of people buying coverage and put them into a “high-risk pool.” That in theory would bring down the cost insurance for healthier people, but drive up the cost for the sick. Depending upon how much costs increase, that could shut some or many of the people who definitely need health care out of the insurance market.

High-risk pools haven’t shown great results where they have been currently implemented. Part of the problem has been funding. That’s why Trump picked up two more votes with a proposal for $8 billion more for those pools, but experts say that’s not even likely enough.

The U.S. government already has very high-profile high-risk pools, Medicare and Medicaid. Medicare, health care for the elderly, is popular but expensive.

A big point of Obamacare was to not go down that potentially problematic funding lane. Healthier people might pay a little more, but if you got sick, it wouldn’t bankrupt you.

So why the rush to get this through if it has all these holes and it may not be what eventually becomes law anyway? Politics. The House finally has a chance to tell its base it did something, it passed something to repeal-and-replace Obamacare.

The House goes on recess next week, and Republicans want to get this done and hand President Trump a win before then.

It’s a huge relief for House Speaker Paul Ryan, who was feeling the heat of not being able to govern House Republicans.

It’s a huge relief for President Trump, who has been made to look ineffectual with no legislative wins to speak of in his first 100 days and little other major accomplishments in that time — despite Republicans being in charge of the White House, the House and Senate.

But remember, the GOP plan that failed previously had just a 17 percent approval rating. And, policy-wise, it hasn’t changed all that much.

President Obama ran into a similar problem — health care is very difficult to message about but very easy to poke holes in. And Democrats lost control of the House in 2010 because of health care.

Now, the Affordable Care Act, Obama’s signature legislative achievement, has had a resurgence in public opinion. Gallup found approval of the ACA at 55 percent this month, the first time its ever reached a majority in the poll.

President Trump says the GOP bill can’t be compared to the ACA “because Obamacare is dead.”

First of all, that’s not true. The last CBO analysis of the ACA said it’s not in a death spiral.

Second, anything that comes after Obamacare has to be compared to it.

What’s that you say, health care and legislating are complicated? Yes, they are, and there’s still a long way to go.