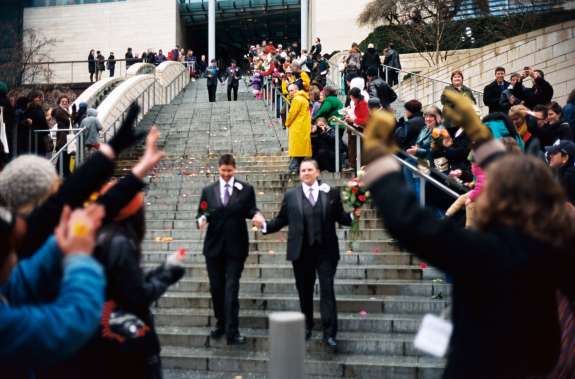 Recently married couples leaving the City Hall in Seattle are greeted by well-wishers on the first day of same-sex marriage in Washington state after enactment of Washington Referendum 74. Photo: Dennis Bratland

Gay couples who want to marry in Florida were delighted with Friday’s decision from the U.S. Supreme Court. The court left a federal judge’s ruling in place, declaring the state’s gay marriage ban unconstitutional.

After Friday’s ruling from the nation’s top court in a parallel federal case, they would like to get married as soon as possible. As in 12:01 a.m. on Tuesday, January 6.

But a law firm advising Florida’s court clerks says the federal ruling applies only to Washington County  and other clerks could be charged with a first-degree misdemeanor if they issue marriage licenses.

Huntsman says he hopes Florida Attorney General Pam Bondi will take the high court ruling as a cue and drop the state’s opposition to gay marriage altogether. And they’re also waiting to hear from the next step in their own case, which the state took to the Third District Court of Appeal.