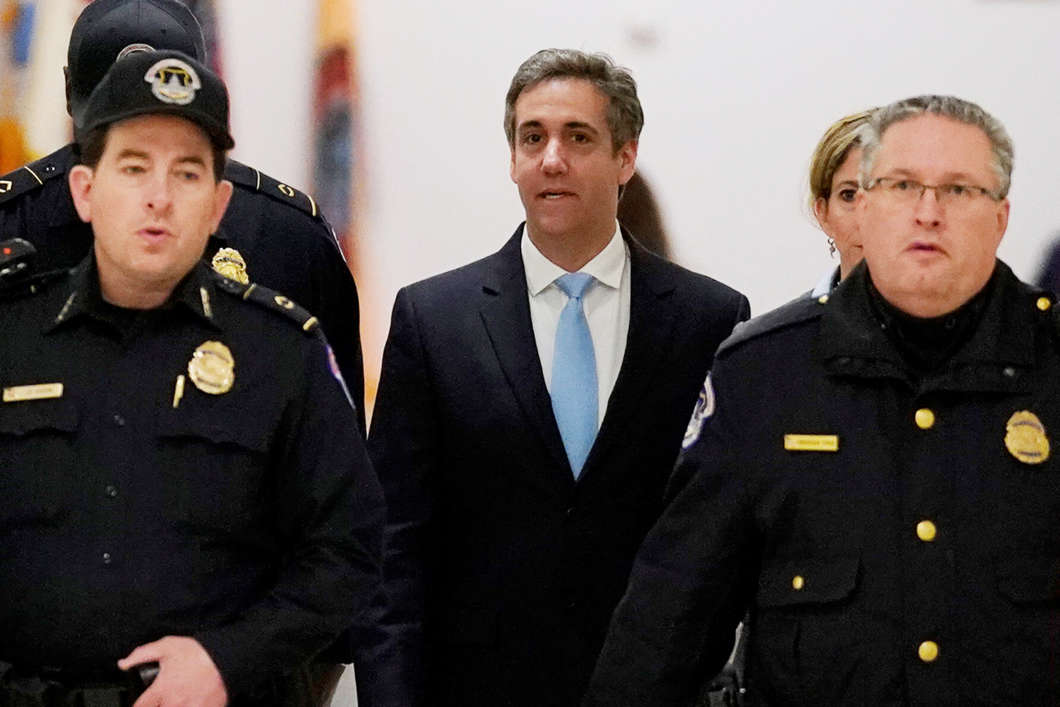 Michael Cohen, the former personal attorney of President Trump, is escorted by Capitol Hill police officers as he arrives to testify at a House Committee on Oversight and Reform hearing on Wednesday

“I don’t know a jury in America that would believe anything that Mr. Cohen says given his past actions and lies,” Steube said. “You stated that Trump never directed you to lie to Congress, is that correct? Therefore you lied to Congress on your own accord and then admitted to lying to Congress.”

Cohen has pleaded guilty to campaign finance violations and lying to Congress. He delivered blistering testimony before the House Oversight and Reform Committee on President Donald Trump. He portrayed the president as a racist and mob boss.

Florida Representative Debbie Wasserman Schultz asked Cohen about emails WikiLeaks released during the 2016 campaign and whether President Donald Trump knew about them in advance. The former Trump lawyer said yes — but that Trump did not know the substance of the emails.

“But you do testify that he had advance knowledge of their imminent release?” she asked,

“That is what I stated in my testimony,” Cohen replied.

“And that he cheered that outcome?” Wasserman Schultz continued.

Wasserman Schultz is a member of the House Oversight and Reform Committee. She resigned as chairwoman of the Democratic National Committee after the dump of the hacked emails.

Meanwhile, the Florida Bar has opened an investigation into Matt Gaetz after it received a complaint about a taunting tweet he made hours before Cohen’s testimony.

Gaetz asked if Cohen’s wife and father-in-law knew about his girlfriends. Gaetz later apologized and deleted the tweet, denying allegations that he was trying to intimidate a witness.

Congresswoman Stacey Plaskett of the U.S. Virgin Islands said Gaetz should be referred to the House Ethics committee.

“As a former prosecutor and former counsel on House Ethics, I think at the very least there should be a referral to the ethics committee of witness intimidation or tampering … of my colleague Matt Gaetz, and it may be possibly him being referred for a criminal prosecution,” Plaskett said.

Florida Bar spokeswoman Francine Walker said in an email Wednesday that an investigation has been opened into Republican Matt Gaetz, but confidentiality rules prevent her from offering any further details.

Gaetz, who is a Florida Bar member, has 15 days to respond. After an initial evaluation, the case is sent to a branch office and then a grievance committee, if Bar officials believe it has merit. If the grievance committee finds probable cause, charges are filed with the Florida Supreme Court and then a judge is appointed to hear the case.