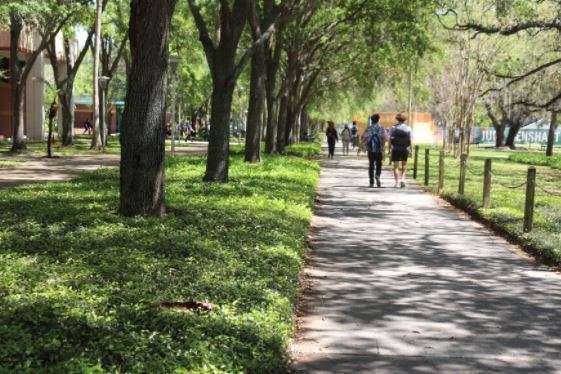 Under the new law, schools such as the University of South Florida, pictured, are mandated to send out surveys to all students, faculty, and staff. (Victoria Crosdale/ WUSF Public Media)

Proponents of the law argue that it will be used to “promote intellectual freedom and viewpoint diversity” in the classroom.

The Intellectual Freedom and Viewpoint Diversity survey, sent out Monday, asks about such things as political beliefs in the classroom and comfort levels in sharing these views.

The survey differs between students and faculty, with students being asked 21 questions and employees 24 questions.

A disclaimer in the survey reads: “Responses will only be reported at the group level, not at the individual level. Respondents’ identities will never be published or compromised in any way.”

According to the News Service of Florida, the survey is a result of House Bill 233 — legislation passed by Florida lawmakers and signed into law by Gov. Ron DeSantis last year.

State University System Chancellor Marshall Criser touted the surveys during last week’s meeting of the Board of Governors.

“This has never been done in this country before,” Criser told the board. “We are doing a hundred-percent census of our students, our faculty and our staff.”

Proponents of the law argue that it will be used to “promote intellectual freedom and viewpoint diversity” in the classroom.

However, opponents, including the United Faculty of Florida, fear this survey will be used as a political tool to gauge liberal views on Florida school campuses.

The University of Florida chapter of the United Faculty of Florida released a statement Monday morning urging students, faculty, and staff to boycott the survey.

“Ignoring this survey is an act that protects individuals of all political persuasions, now and into the future. This survey would not pass ‘validity tests’ in any institutional review process, as there is no way to ensure that responses will reflect the demographics of the institution. It is not worthy of time away from our teaching and research,” the union said in a statement.

The questionnaire was released Monday following a request for an emergency motion late last week by opponents of the law.

They urged Chief U.S. District Judge Mark Walker to issue a preliminary injunction against the implementation of this survey, but he refused, saying on Friday there was “no legal precedent” that would allow him to do so.

The UFF statement also said they plan to fight the law in federal court, calling it an “infringement upon the basic rights of all Floridians.”

Walker has scheduled a trial on whether the surveys violate free speech rights to start on Sept. 19.

Universities around Florida sent out an email Monday “inviting” students, faculty, and staff to complete this survey.

In an email to WUSF, University of South Florida Assistant Director of Media Relations Althea Johnson shared the message that some schools sent out saying that the survey is “completely voluntary” and that “no personally identifiable information” will be associated with responses.

Johnson declined to comment further on USF’s stance on this issue.

Both Johnson’s email and the survey encouraged people with concerns to contact the Florida Board of Governors.

Results from the survey responses will be reported to state leaders by September.