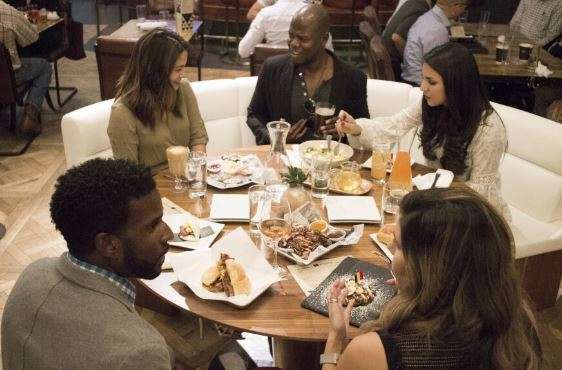 One expert attributes part of the rise in cases to more and more people socializing indoors as the summer heats up. (The Hall On Franklin)

One expert expects the state to hit a peak, and then start to see lower hospitalizations and cases.

While many Floridians are living their lives without COVID-19 precautions, the number of coronavirus cases and hospitalizations in the state is on the rise.

High-risk level counties are largely determined by the number of coronavirus-related hospitalizations.

Jason Salemi is an associate professor of epidemiology at the University of South Florida. He said this news is not shocking.

1. Well, the new @CDCgov levels have been released. It appears to be Florida’s turn for the not-so-great stuff.

We start with the hospital-based and transmission-based, county-level risk levels.#AltText included pic.twitter.com/umQgA2ntIh

In terms of how we got here, Salemi said Florida has a large older population, waning immunity from prior infections, lack of coordinated effort to stop the disease’s spread, and more and more people socializing indoors as the summer heats up.

Northeastern states experienced a similar growth in cases earlier in the year, when temperatures were too cold to dine, drink or hang out outside, he said.

“When you look at all of these things together its not surprising, when you couple that with new sub variants that have a high capability of re-infecting people and evading certain aspects of our immune system,” he said. “All of this is kind of a perfect storm of increasing case rates, increasing hospitalization rates.”

Salemi said what happens next is hard to predict, but he expects the state to hit a peak, and then start to see lower hospitalizations and cases.

While the caseload is not as high as earlier pandemic times, Salemi said this news is still worrisome, and means residents should take steps to protect themselves.

“I sometimes get the perception that people when they’re digesting all of this data, they feel as though they have to either do everything perfectly or do nothing at all to try to reduce the risk of transmission of the virus,” he said. “It’s not binary, it’s not an either or.”

He said there are still ways to engage with the community, while reducing your risk.

Salemi recommends wearing a high-quality, well-fitting mask while in public indoors, especially in crowded rooms. People should try to practice social distancing and do as many activities outdoors as possible.

One of the biggest things Floridians can do, he said, is try to improve ventilation and air filtration.

Salemi said its important to remember that we’re all in this together, and to work to lessen transmission as a community.